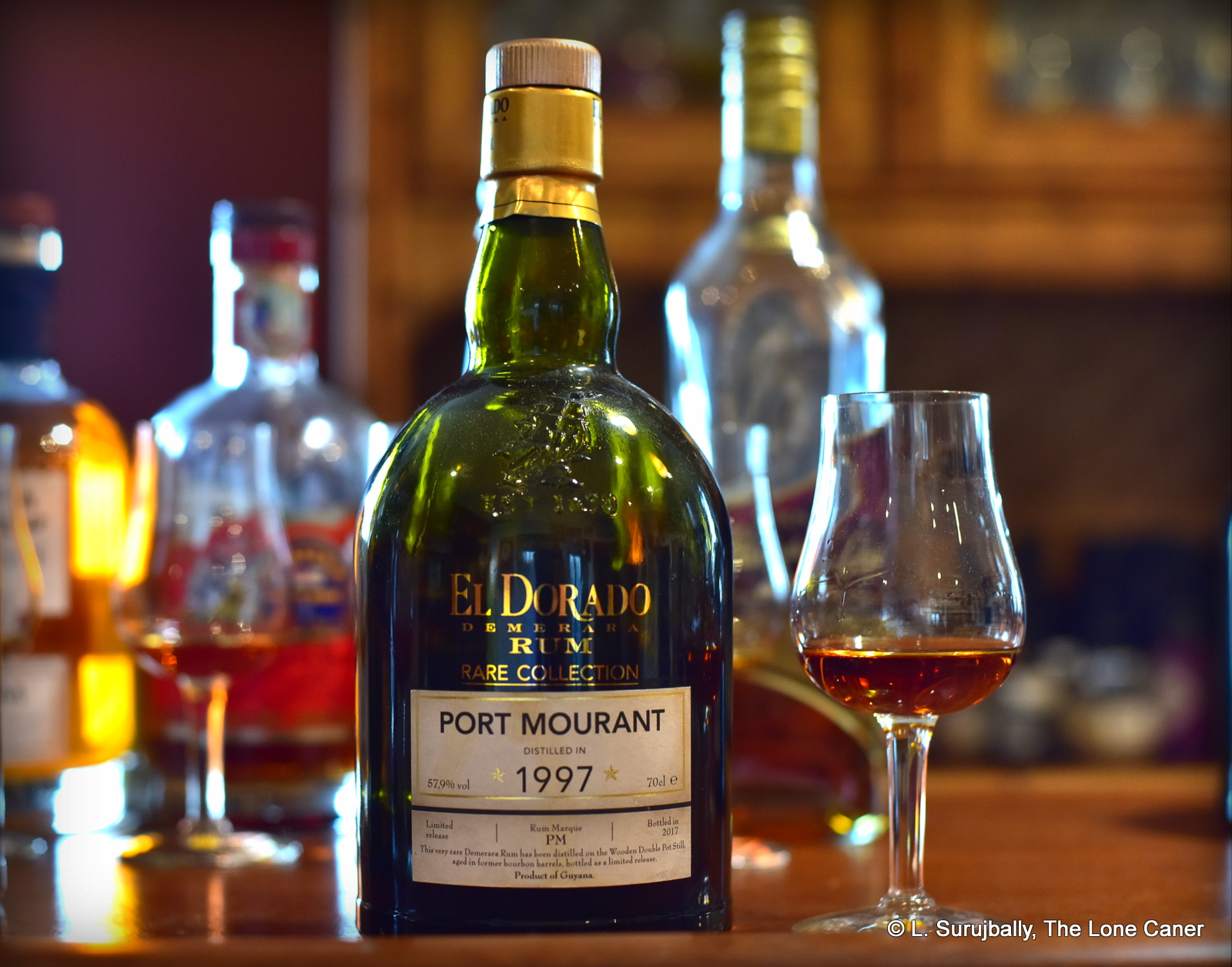 DDL kinda snuck behind our backs and released another set of rums from the Rare Collection back in 2017, and the mere fact that I would have to mention this fact in my opening remarks shows how quietly the whole thing was handled, to the probable mystification of many. The DDL and El Dorado Facebook pages don’t mention them, the El Dorado web page is out of action (either by itself or as a redirect from the DDL page) and even the big FB rumclubs hardly make mention of it – except a couple of days ago when some questions came out regarding the Diamond 1998 on the Global Rum Club.

For the benefit of those who are interested, Release II of the Rares consists of the following rums (to the best of my knowledge):

Today we’ll look at the Port Mourant, because of all the wooden stills’ outturns, that marque remains my favourite – Enmore is usually good though somewhat hit or miss depending on who’s making it, Versailles takes real skill to elevate to the heights, and the Savalle still makes a different profile from the wooden ones….but the PM is consistently top class (even if only in my personal estimation). This one, bottled in a dark green bottle, is 20 years old and 57.9% with an unknown outturn, and not the best of the Release II set, but still a very good drink when compared with the first editions that came out with such fanfare (and opprobrium) in early 2016.

The way it smells seems like a more elemental, “cleaner” version of the Port Mourant-Diamond PM<SVW> which was Velier’s 70th Anniversary edition – in that purity of focus may reside a quality that is slightly higher. It represented PM’s standard profile in fine style, perhaps because it wasn’t trying to make nice with another still’s divergent (if complementary) profile. Bags of fruit came wafting out of course, sweet dark prunes, dates, raisins, vanilla, and of course anise. It was deep and dark and rich, offset somewhat by a lighter line of flowers and faint citrus, bitter chocolate and coffee, and I make no bones about enjoying that familiar series of aromas which has become almost a standard for the PM still.

Even at 57.9%, the strength was well handled, excellently controlled – the depth and warmth of the rum, its heaviness, muted any overproofed bitchiness that sometimes sneaks through such rums, and made it taste dark and warm rather than light and sharp. The palate led off with the caramel-infused (strong) coffee, more bitter chocolate and licorice — but there were intriguing notes of aromatic sawdust and pencil shavings lurking in the background as well. To that, over time, were added fruity flavours of sweet plums, blackberries, peaches, and a little orange peel and perhaps a flirt of cinnamon, and they were well integrated into a cohesive whole that was really a treat to sip, all leading into the finish which summed up most of the preceding flavours – cinnamon, oak, sawdust, coffee grounds, chocolate and anise, long and lasting. It was definitely a level above the original PM.

When Release I of the Rares appeared in early 2016, Velier lovers went quietly apesh*t, evenly split between those who hated on DDL for replacing what were already seen to be rums that it would be heresy to mess with, and those who felt the prices were out to lunch. The situation hasn’t appreciably changed between then and now, except in one respect – Release II is, in my opinion, better. The R1 PM 1999-2015 16YO garnered a rather lackluster 83 points from me and other writers were not particularly chuffed about it either. This one is a few points better, and shows that DDL has definitely worked on upping their game, so if it comes down to decision time, it’s the R2 version that would get my bucks — because it demonstrates many of the hallmarks of quality for which I and others search so assiduously when selecting a cask strength rum. That, and the fact that it’s just a damned fine example of the Port Mourant still itself. So even if we don’t have the Velier Demeraras any longer, at least the replacements are right up there too. What a relief.

This rum was one of the eight Demeraras from DDL and Velier I ran past each other a few months ago.