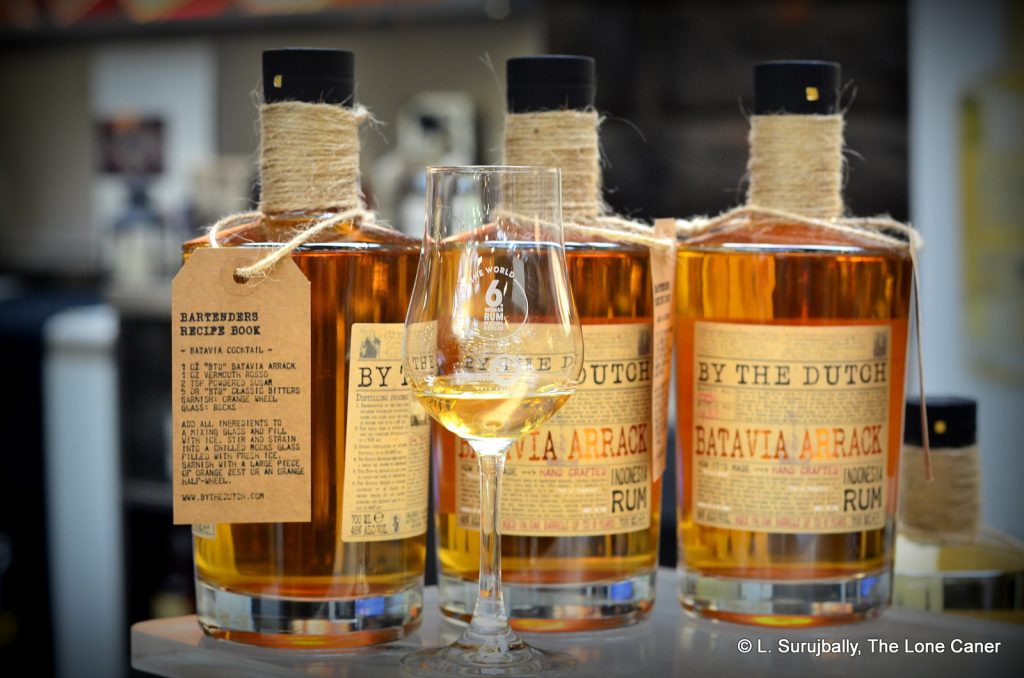 Somehow, after a big splash in 2015-2016, Indonesian rums came and left the scene with equally and almost startling suddenness. Although Haus Alpenz has been making a Batavia Arrack Van Oosten for many years (even decades, perhaps), it is a niche spirit, really, and not many know of it, and no, I haven’t tried it. My first encounter with the arracks came when I bought the Compagnie des Indes Indonesia rum in 2015 (and quite liked it), and within the year By The Dutch put this fascinating product out the door and then occasional photos began making the rounds on FB of Naga and Nusa Cana rums. Shortly thereafter Matt Pietrek wrote one of his deep dives into the By the Dutch rum, and yet after all that, somehow they have almost vanished from the popular consciousness.

Perhaps it’s the renaissance of Bajan and Jamaican rums in those same years that stole the show, I don’t know – certainly over the last years the various social media are fuller of Bajan and Jamaican rum pictures and commentaries than just about anything else. Maybe it’s physical distribution, festival absences, word of mouth, Facebook posts (or lack thereof). Whatever the case for its lack of mindshare, I suggest you give it a try, if only to see where rum can go…or where it has already been.

Part of what makes arrack interesting is the way it is fermented. Here some fermented red rice is mixed into the yeast prior to addition to the molasses and water (up to 5%), which undoubtedly impacts the final taste. I was told by a By the Dutch rep that this particular spirit derives from sugar cane juice and fermented red rice cake, and is then twice distilled: once in a pot still, producing a distillate of about 30% ABV, and then again in another pot still to around 60-65%. At that point it is laid to rest in barrels made of teak (!!) in Indonesia for a number of years and then shipped to Amsterdam (Matt implies it’s to Scheer) where it is transferred to 1000L oak vats. The final arrack is a blend of spirits aged 8 months, 3, 5 and 8 years, with the majority of the spirit being 3 and 5 years of age and bottled at 48% ABV.

A production process with so many divergent steps is sure to bring some interesting tastes to the table. It’s intriguing to say the least. The nose, even at 48%, is remarkably soft and light, with some of that pot still action being quite evident in the initial notes: rotting banana skins, apples gone off and some funky Jamaican notes, if perhaps not as intense as a Hampden or worthy Park offering. This then slowly — almost delicately — released light citrus, watery fruit and caramel hints, chamomile, cinnamon, green tea and bitter chocolate and a sort of easy sweetness very pleasing to smell.

It got better when I tasted it, because the strength came out more clearly – not aggressive, just very solid and crisp at the same time, sweet and clear, almost like an agricole with some oak thrown in for good measure. The pot still origins were distinct, and taste of sweet fruits gone over to the dark side were handled well: apples, citrus, pears, gherkins, the very lightest hint of olives, more tea, green grapes, with cooking spices dancing around everything, mostly nutmeg and cinnamon. Even the finish was quite aromatic, lots of esters, bananas, apples, cider and a sort of grassiness that was more hinted at than forcefully explored.

As an alternative to more commonly available rums, this one is good to try at least once. It doesn’t smack you in the face or try to damage your glottis – it’s too easy or that – and works well as both a sipping drink (if your tastes go that way), or something to chuck into a mai-tai or a negroni variation. One of the reasons why it should be tried and appreciated is because while it has tastes that suggest a Jamaican-Bajan hybrid, there is just enough variation here to make it a fascinating drink on its own merits, and shows again how rum is simply the most versatile, varied spirit available. Plus, it’s quite a nifty rum by itself, sweet enough for those who like that, edgy enough for those who want more.

Now, with respect to the rum news all being about the western hemisphere’s juice: I don’t begrudge the French, Spanish or English Caribbean rum makers their glory — that would be deeply unpatriotic of me, even if one discounted the great stuff the islanders are making, neither of which is an option. There’s a reason they get just about 75% of the press, with the independents and Americans (north and south) getting the remainder. But I just want to sound a note of caution about the blinkers such focus is imposing on our rumsight, because by concentrating on nothing but these, we’re losing sight of great stuff being made elsewhere – on the French islands, St Lucia, Grenada, Mexico, Japan…and Indonesia. From companies like By the Dutch. A stern and forbiddingly solid cask-strength rum this is not – but it’s original within its limits, eminently sippable for its strength, it’s an old, even ancient drink made new, and even if one does not immediately succumb to its languorous charms, I do believe it’s worth taking out for a try.

The bottle clearly says “aged up to 8 years”. Understand what this means before you think you’re buying an 8 Year Old rum.