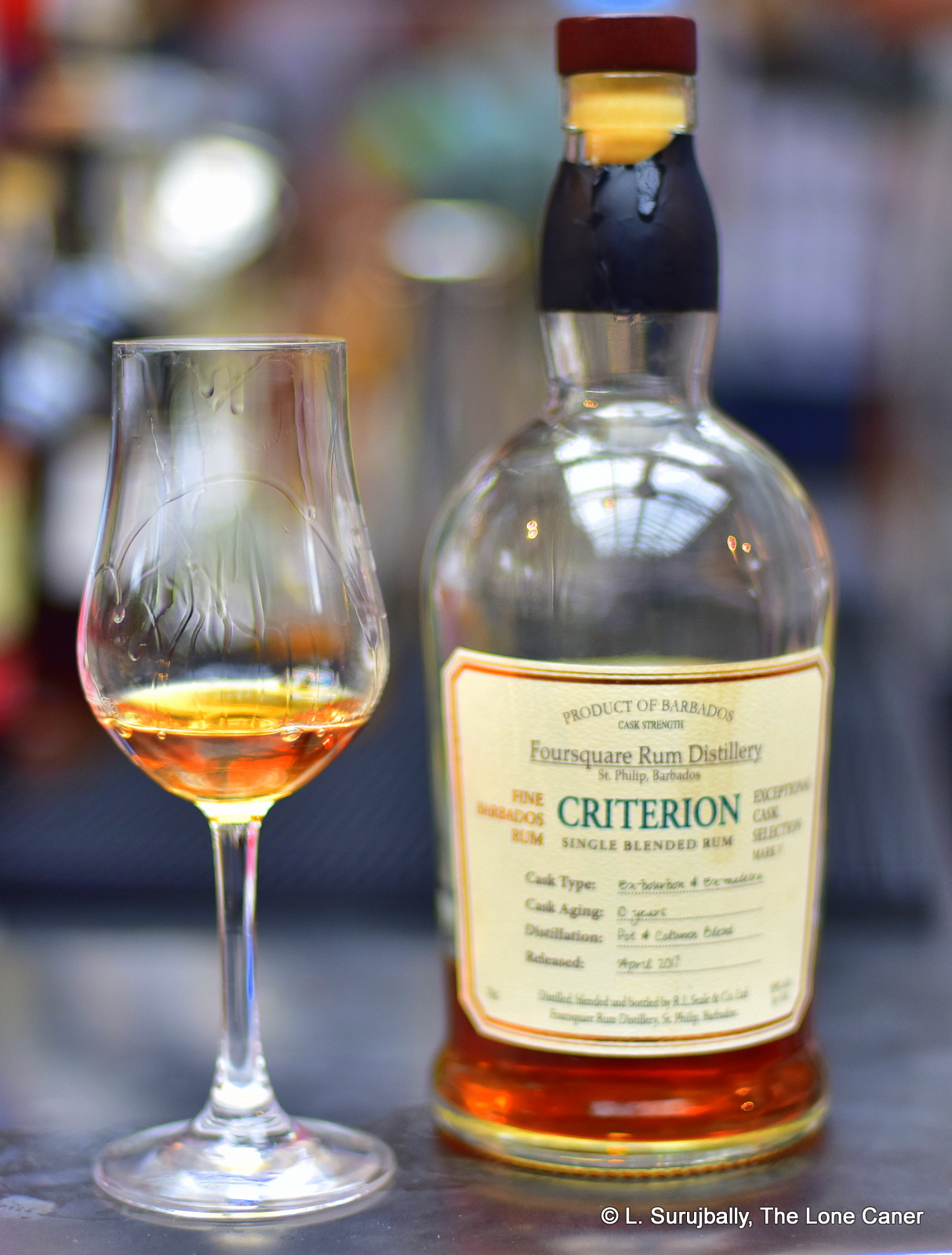 Everyone has a favourite Foursquare rum and the nice thing is, like most large large brands, there’s something for everyone in the lineup, which spans the entire gamut of price and strength and quality. For some it’s the less-proofed rums still issued for the mass market, like Rum 66 or Doorly’s; for others it’s the halo-rums such as the Triptych and 2006 ten year old. However, it my considered opinion that when you come down to the intersection of value for money and reasonable availability, you’re going to walk far to beat the Exceptional Cask series. And when Forbes magazine speaks to your product, you know you’re going places and getting it right, big time. 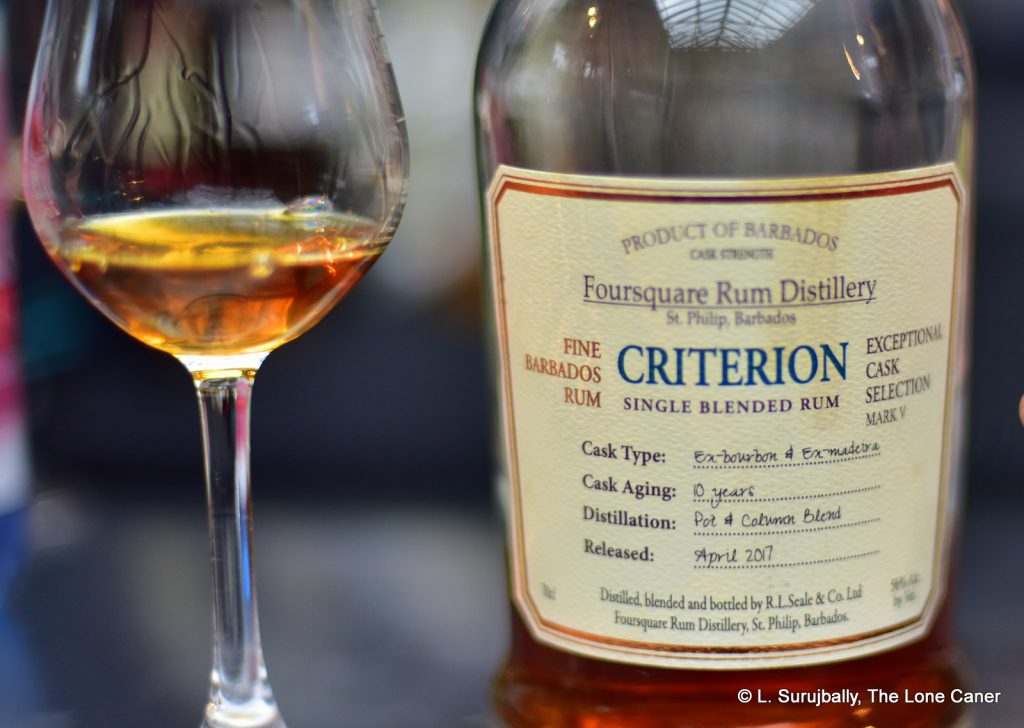 Let me explain that by just passing through the tasting notes here: let me assure you,the Criterion is pretty damned good – actually, compared to any of the lesser-proofed Doorly’s, it’s amazing.The sumptuousness of a Louis XIVth boudoir is on full display right from the initial nosing. Even for its strength – 56% – it presented with the rich velvet of caramel, red wine (or a good cognac). Oaky, spicy and burnt sugar notes melded firmly and smoothly with nutmeg, raisins, and citrus peel, cardamon and cloves, and there was a glide of apple cider on the spine that was delectable. The longer I let it breathe, the better it became and after a while chocolates, truffles and faint coffee emerged, and the balance of the entire experience was excellent.

Tasting it, there was certainly no mistaking this for any other rum from Barbados: the disparity with other rums from the island which my friend Marco Freyr remarked on (“I can detect a Rockley still Bajan rum any day of the week”) is absolutely clear, and as I taste more and more Foursquare rums, I understand why Wes and Steve are such fanboys. The rum is a liquid creme brulee wrapped up in salt caramel ice-cream, then further mixed up with almonds, prunes, cherries, marmalade, cider and nutmeg, remarkably soft and well-behaved on the tongue. Coffee and chocolate add to the fun, and I swear there was some ginger and honey floating around the back end there somewhere. It all led to a finish that was long and deeply, darkly salt-sweet, giving last notes of prunes and very ripe cherries with more of that caramel coffee background I enjoyed a lot.

So, in fine, a lovely rum, well made, well matured, nicely put together. No wonder it gets all these plaudits. My feeling is, retire the Doorly’s line – this stuff should absolutely have pride of place.

Here’s the thing, though. Purists make much of ‘clean’ rums that are unmessed with, exemplars of the style of the country, the region and the estate or maker. By that standard this rum and its brothers like the Zinfadel and the Port are problematical because none of these are actually ‘pure’ Bajan rums any longer… all this finishing and ageing and second maturation in second or third-fill barrels is watering down and changing what is truly “Barbados” (or perhaps Foursquare). What these rums really are, are a way of getting around the adulteration prohibitions of Bajan law….adding taste and complexity without actually adding anything that would qualify as obvious adulteration (after all, what is ex-bourbon barrel ageing but the same thing with a more “accepted” cask?). So for the pedant, one could argue that the series is more a high end experiment and what comes out the other end is no longer a pure Barbadian hooch but a double or triple matured blended rum based on Bajan/Foursquare stocks….a subtle distinction and so not quite the same thing.

Maybe. I don’t care. My work here is to describe what I taste and offer an opinion on the product as it stands, not its underlying production philosophy: and the bottom line is, I enjoyed the experience and liked it, immensely – it blew the socks off the Doorly’s 12 year old I also tried that day, and makes me want to get all the Exceptional Cask series, like yesterday, and put dibs on all the ones coming out tomorrow. The Criterion is drinkable, sippable, mixable, available, accessible and all round enjoyable, and frankly, I don’t know many rums in the world which can make that statement and still remain affordable. This is one of them, and it’s a gem for everyone to have and enjoy.