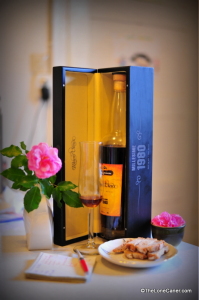 When one buys a raft of intriguing aged rums and then samples several dozen more (especially after a protracted absence), the issue is which rum to start reviewing first. Since my intention on this go-around was to run through several Caroni rums from Trinidad, as well as to give more weight to agricoles from the French West Indies, I decided that one of the best of the latter deserved some consideration. And that’s this sterling Damoiseau. 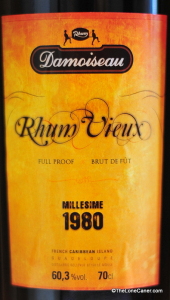 The Bellevue au Moule estate and distillery was established at the end of the 19th Century by a Mr. Rimbaud from Martinique, and was acquired by Mr. Roger Damoiseau in April 1942…since then it has remained within his family (the estate and distillery are currently run by Mr Hervé Damoiseau). They claim to be the market leader in Guadeloupe — 50% market share, notes the estate web page — and their primary export market remains Europe, France in particular.

Forget all that, though: this 1980 edition would be enough to assure their reputation as a premium rum maker by any standard. Damoiseau themselves obviously thought so too, because it’s not every day you see a polished wooden box enfolding a bottle, and costing as much as it did. And once open, bam, an immediate emanation of amazing aromas greeted me. Even with my experience of full proof rums clocking in at 60% and over, this one was something special: plums, dark ripe cherries and cinnamon blasted out right away. The rum was impatient to be appreciated but then chilled out, and crisp, clean and direct notes of white flowers and the faintest bit of brown sugar and fresh grass came shyly out the door. I’d recommend that any lucky sampler to get his beak in fast to get the initial scent bomb, and then wait around for the more relaxed aftersmells.

What also impressed me was how it arrived in the palate: you’d think that 60.3% strength would make for a snarling, savage electric impact, but no, it was relatively restrained: heated, yes, but also luscious and rich. (The closest equivalent I could come up with when looking for a comparative to this rum was the 58% Courcelles 1972 which also had some of the loveliness this one displayed). Fleshy, sweet, ripe fruit were in evidence here, pineapple, apricots, crushed grapes, apricots – it was so spectacular, so well put together, and there was so much going on there, that it rewarded multiple trips to the well. It’s my standard practice to add some water when tasting to see how things moved on from the initial sensations: here I simply did not bother. It was hard to believe this was an agricole, honestly – it was only at the back end that something of the light cleanliness and clarity of the agricoles emerged, and the fade was a pleasant (if a bit sharp), long-lasting melange of white fruit (guavas, I’m thinking), a twist of vanilla, and light flowers.

Guadeloupe as a whole has never been overly concerned about the AOC designation, and creates both pure cane-juice and molasses-based rums, in light and dark iterations of vieux, très vieux, hors d’age and (not as common) the Millésimé – that’s where we head into rarefied territory, because it denotes a particular year, a good one. From the taste of this rum, the heft and the richness, 1980 outturn must have been phenomenal. For a very long time I’ve not been able to give enough attention to the products of the French West Indies (to my own detriment) – but even the few steps I’ve made have been worth it, if only to see diamonds like this one washed up on the strand at the high water mark.