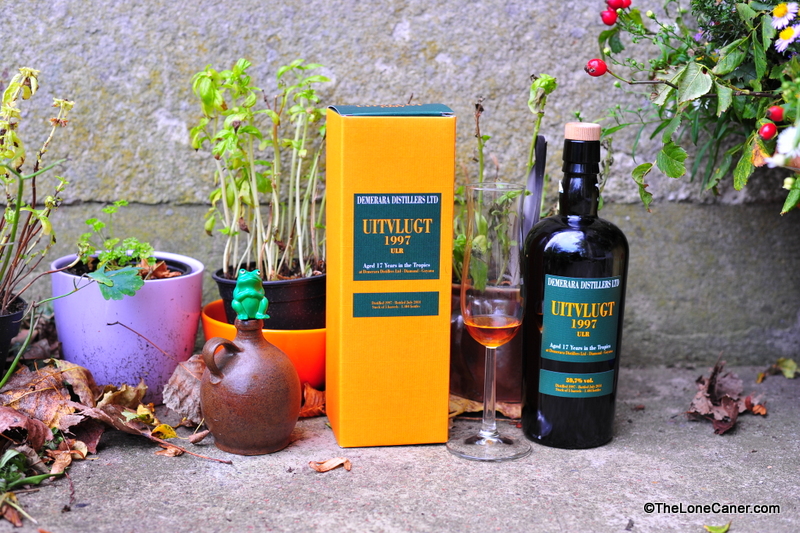 Velier, as its barrels mature in Guyana, issues annual releases when they feel they are ready, much as Rum Nation and other craft rum makers do.  This presents a particular and peculiar problem to rummies, because there is no consistency to any of them: in other words, while a DDL El Dorado 21 Year Old will be more or less the same no matter when you buy it, a Velier PM 2013 release will not be the same as a Velier PM 2014 release, even if they are both fifteen years old. This, to my mind, highlights a great strength and great weakness of craft bottlers, because while it allows for amazing creativity and variety, it also limits the issuance of a particular bottling to a few thousand bottles at best, and it forces consumers to shell out a lot more money for favoured companies’ products – as I have.

That aside, let’s start at the beginning with some core facts about the subject under review here. Velier issued this new (2014 year) release in July, with 1404 bottles deriving from five barrels; it was distilled on a Savalle still, it’s an experimental version – a lighter distillate from a still which can produce both light and dark variations, hence the “ULR”, which stands for Uitvlugt Light Rum (thanks, Cyril).  The labelling on bottle and cardboard case is excellent, by the way: no fancy frippery or outlandish graphics, just pertinent facts about the rum (including evaporation losses of 77%), as brief and stark as a haiku.  Just about everything you might want to know is there.

Nose?  Wow.  Just lovely.  The ULR 1997 was a darkish-honey colour in the glass, and emitted heated vapours of soft clarity that was reminiscent (if not quite as spectacular) as the that McLaren that was the UF30E. Vanilla, herbal tea and white flowers right off the bat, not fierce on the attack, just clean and strong, and persistent to a fault.  Vague caramel and salt biscuits followed on, and easy notes of fruit jam and sweet, ripe black grapes closed off the nose – it was so succulent that I felt I had just roped in Monica Bellucci in a teddy.

You can tell a masterful rum when, as you sip the thing down, 59.7% doesn’t really feel like it.  It was as exciting and well made as a Gibson guitar, with notes that hummed and vibrated in harmony…I honestly don’t know how this is accomplished so well.  The white chocolate, cafe-au-lait, pastries, and creamy buttery notes slid smoothly past my taste buds and there were some oak tones winding their way around the palate, though not enough to spoil the drink. Nougat and hazelnuts shimmered around the edges, moving to a lingering, warm finish with final fumes of raspberries in cream. 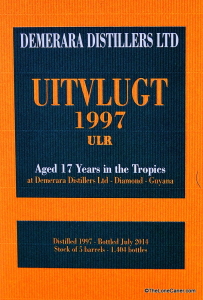 Uitvlugt was a West Coast Demerara sugar plantation which Bookers McConnell mothballed decades ago: it means “outflow” in Old Dutch (yes, like New York, Guyana was once a Dutch colony), and it usually has marques of ICB/U, ICB/C and ICB associated with it (most notably by DDL itself), possibly by reference to the original owner of the plantation, Iohann Christoffer Boode; it’s unclear when this new moniker of ULR began. Its rums, made from a metal Savalle still, are usually characterized by a distillate which is not so heavy as the dark brooding machismo of, oh, Port Mourant.  This one may be even more so.

Summing up, the Uitvlugt 1997 is immensely enjoyable…I went through three tasting glasses of it in next to no time, it was so pleasant.  It’s cleaner and lighter than other Veliers (like the Albion 1994), has perhaps more in common with the Blairmont 1991, and stands singularly apart from the remarkable Diamond 1999 (2014 edition); it’s a UF30E in waiting, maybe. It might not be the most charismatic or powerful exhibit in this sub-universe of the equine-endowed full-proofs, but it isn’t a shrinking violet in the greenhouse either, and compares exceedingly well with all its other siblings.

This was one of four samples provided by Luca Gargano to me personally when he heard I would be in Europe in October 2014.  I stand by my sterling review because it really is that good (see the review for Old Man Spirits’s Uitvlugt 16 year old next week for an interesting counterpoint).  I have outstanding query from my email to him…I’ll get into that when I deal with the Old Man.  See you next time. 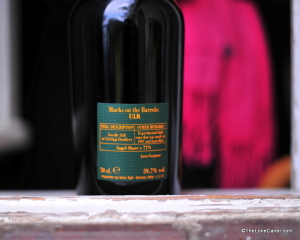