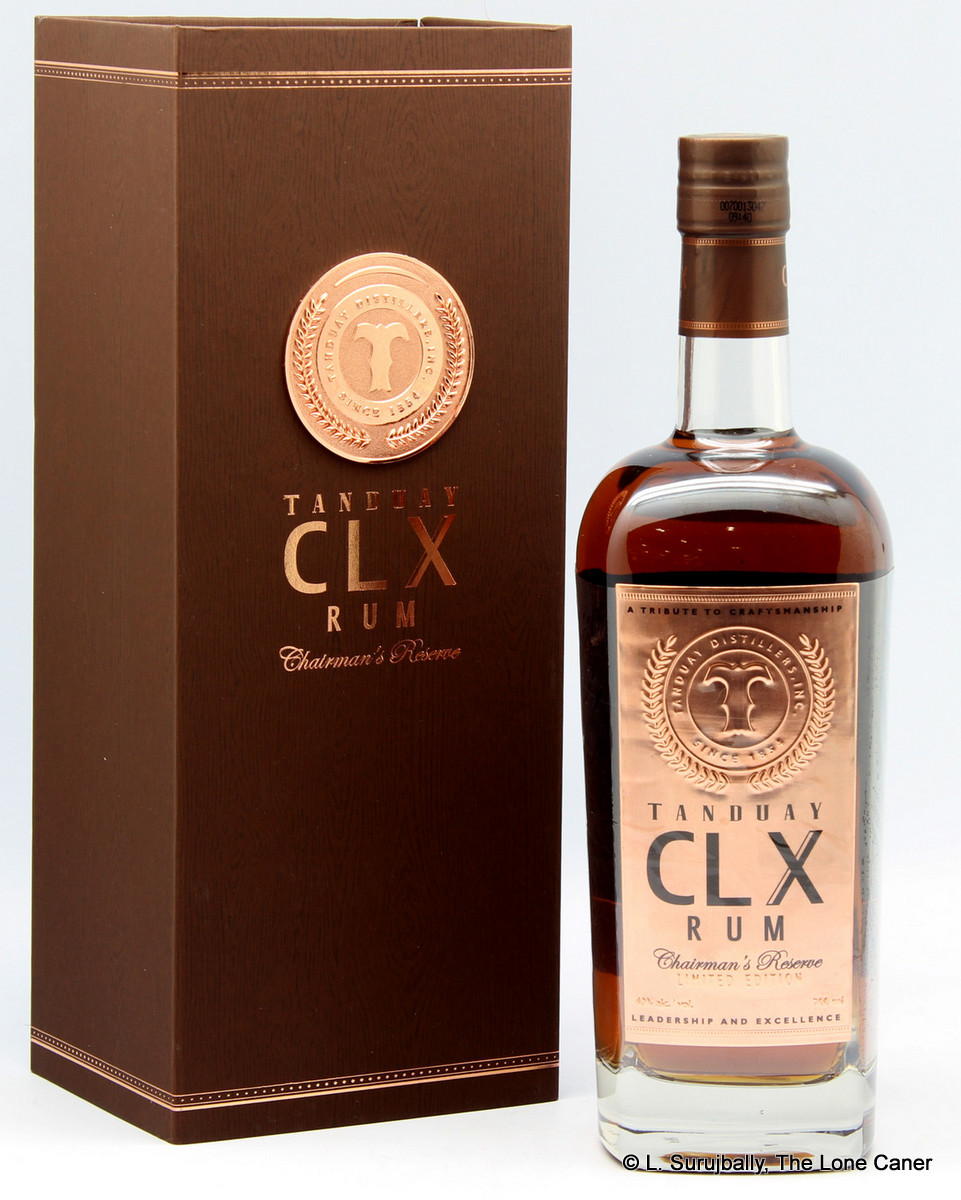 Tanduay, for all its small footprint in the west, is one of the largest rum makers in Asia and the world (they’re either 1st or 2nd by sales volume, depending on what you read and when), and have been in business since 1854. Unsurprisingly, they see fit to commemorate their success with special editions, and like all such premiums with a supposedly limited release meant only for the upper crust, most can get one if they try. The question is, as always, whether one should bother.

The presentation of the CLX rum is good – boxed enclosure, shiny faux-gold label, solid bottle. And all the usual marketing tantaraas are bugled from the rooftops wherever you read or look. It’s a selection of their best aged reserves, supposedly for the Chairman’s personal table. It has a message on the back label from said Chairman (Dr. Lucio Tan) extolling the company’s leadership and excellence and the rum’s distinctive Filipino character (not sure what that is, precisely, but let’s pass on that and move on…). All this is par for the course for a heritage rum. We see it all the time — kudos, self praise, unverifiable statements, polishing of the halos. Chairmen get these kinds of virtuous hosannas constantly, and we writers always smile when we hear or see or read them.

Because, what’s missing on this label is the stuff that might actually count as information – you know, minor, niggly stuff like how old it is; what kind of still it was made on; what the outturn was; what made it particularly special; what the “CLX” stands for…that kind of thing. Not important to Chairmen, perhaps, and maybe not to those maintaining the Tanduay website, where this purportedly high-class rum is not listed at all – but to us proles, the poor-ass guys who actually shell out money to buy one. From my own researches here’s what I come up with: CLX is the roman numerals for “160” and the rum was first issued in 2014, based on blended stocks of their ten year old rums. It is more than likely a column still product, issued at standard strength and that’s about all I can find by asking people and looking online. 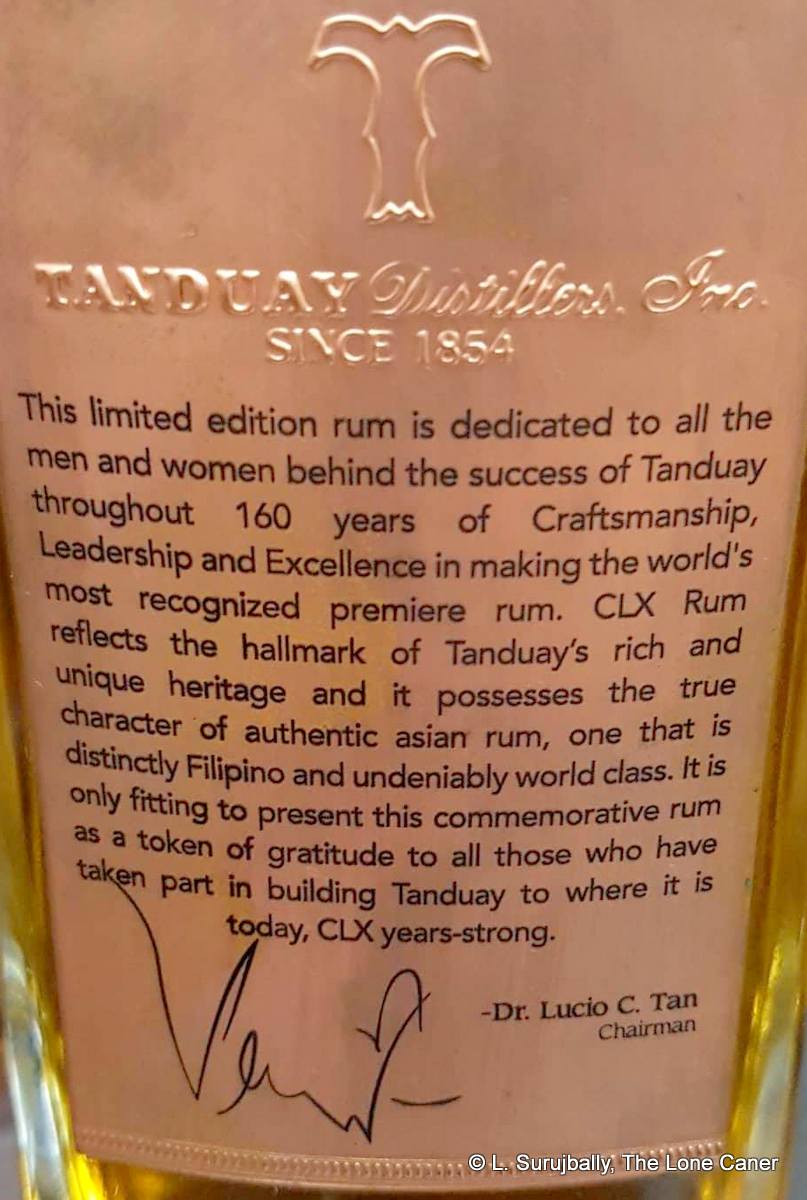 Anyway, when we’re done with do all the contorted company panegyrics and get down to the actual business of trying it, do all the frothy statements of how special it is translate into a really groundbreaking rum?

Judge for yourself. The nose was redolent, initially, of oatmeal chocolate-chip cookies and cereals…like Fruit Loops, I’m thinking. There are also light acetones and nail polish remover. There may be an orange pip or two, a few crumbs of chocolate oranges, or maybe some peach fuzz drifting around, but it’s all thin pickings – maybe it’s the 40% ABV that’s at the root of it, maybe it’s the deliberately mild column still character that was chosen. There is some vanilla and toffee background, of course, just not enough to matter – for this to provide real oomph it really needed to be a bit stronger, even if just by a few points more.

The same issues returned on the very quiet and gentle taste. It seemed almost watery, light, yet also quite clean. A few apples and peaches, not quite ripe, providing the acid components, for some bite. Then red grapes, cinnamon, aromatic tobacco, light syrup, vanilla, leather for the deeper and softer portion of the profile. It’s all there, all quite pleasant, if perhaps too faint to make any statement that says this is really something special. And that standard proof really slays the finish, in my own estimation, because that is so breathy, quiet and gone, that one barely has time to register it before hustling to take another sip just to remind oneself what one has in the glass.

How the worm has turned. Years ago, I tried the 12 year old Tanduay Superior and loved it. It’s placidity and unusual character seemed such a cut above the ordinary, and intriguingly tasty when compared to all the standard strength Caribbean blends so common back then. That tastiness remains, but so does a certain bland sweetness, a muffled deadness, not noted back then but observed now….and which is no longer something to be enjoyed as much.

I have no issue with the standard Tanduay lineup — like the white, the 1854, the Gold, the Superior etc — being deceptively quiet and mild and catering to the Asian palate which I have been told prefers rather more unaggressive fare (some of their rums are bottled south of 39%, for example). I just believe that for an advertised high-end commemorative rum which speaks to a long and successful commercial company history, that more is required. More taste, more strength, more character, more oomph. It’s possible that many who come looking for it in the duty free shops of Asia and blow a hundred bucks on this thing, will come away wishing they had bought a few more of the Superiors, while others will be pleased that they got themselves a steal. I know which camp I fall into.

As always, thanks to John Go, who sourced the rum for me.