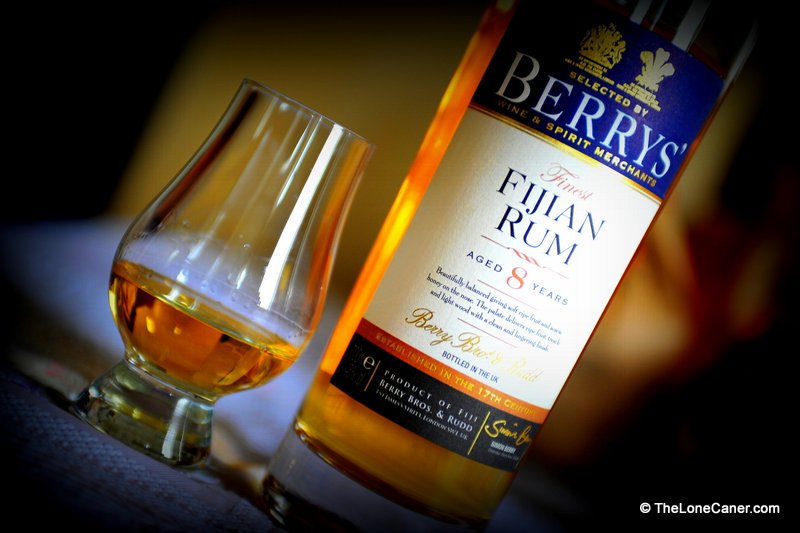 Quasimodo in a shrink-wrapped muscle-car with overlarge tyres

Rums have gotten, over the decades and centuries, rather civilized. Sweaty muscular beefcakes like the SMWS Longpond 9 81.3% and the Bacardi 151 always exist, of course, accompanied by more uncouth and less cultured rums even than that, made less for export than for local consumption…but for the most part, what we get is soft, soothing, decent, well padded.

This 46% rum, however, made by those genteel fellows in England, Berry Brothers & Rudd, was none of these things…which, when you recall the near-brilliant 1975 Port Mourant they also made, is kind of odd. Civilized? Nope. Smooth? Not really. Calming, easy on the nose? Don’t make me laugh. Berry Brothers have done something rather amazingly insane, or stupefyingly stupid depending on your viewpoint, with this Fijian product. They’ve made it a raw, nasty, brutish, ugly, foul tasting kill divil that I dunno, should be used to scour the paint job off your souped up Ford F150. Or maybe fuel it.

Some time ago I reviewed the SMWS Longpond 9, and the Rum Nation Demerara 23 and the Jamaica 25 year old. All three of these had rubbery, almost medicinal notes to them that were initially somewhat disconcerting, but eventually melded into a unique whole I could not help but appreciate. The off-notes I didn’t care for were relatively subdued and well integrated into a fascinating synthesis. No such feeling swept over me as my brother and I nosed the Berry Brothers & Rudd Fijian 8 year old. Because in this case, raw plasticine and rubber notes were so powerful, that I felt a Bugatti had just peeled out of the shop, leaving a black strip on the pavement a mile wide. Medicinal, turpentine, paint thinner was what you got on that nose. Iodine, seaweed, brine, salt biscuits. And then more burnt rubber. They held a commanding stance from the outset, and never let go. Yes there were also timid, trembling scents of grassy and herbal aromas that crept in as if afraid to be noticed; yes, if you paid attention you would get apple cider and perhaps a flirt of not quite ripe pineapple. But it was small consolation. You had to try too hard. They were shouldered aside and squashed flat.

To taste, it was heated and spicy, as befitted a stronger product, and it was reasonably smooth, not raw and clawing, so no issues there. Hay-blonde, quite light, somewhat thin and clear and clean on the tongue. I was kind of suckered in by some lazy background notes of freshly-sawn white wood of some kind, bananas, softer pineapple and an even fainter grassy-green floral note that developed over time, but then the uncompromising rubber returned. Merde, but this was unpleasant. Iodine, seaweed, some peat (I kid you not) mixed it up in the schoolyard with an overweight bully of peeling rubber, turpentine and styrofoam. It’s like I was trying to sample a neoprene suit left behind on the set of “Debbie Does Dallas.” I can concede without hesitation that the texture was pretty good, it felt physically pleasant in the mouth, and the finish was medium long and heated (and may have been the best thing about it, perhaps because we could now see an end to the experience). But I simply don’t appreciate a rum that is redolent of the freshly torn plastic coming off new, over-polished wooden furniture.

So, with all due apologies to BBR (who have made other rums I really enjoyed), this is not a rum I cared for. I asked a dedicated maltster whether, given the profile I described, he would buy it (for $75, which is what I paid), and he said probably, so it may work better for Islay-lovers than it did for me. The thing is, underneath the taste is the texture, and in that texture and mouthfeel you can sense the rum this could have been had it been toned down a bit, perhaps been a bit sweeter (and this is why I scored it as I have). I always thought the Renegades were inconsistent and made by — and perhaps for — whisky lovers, and here we have another in that vein, something of a harnessed lunatic, loud and uncouth and unrefined as a fading rock star’s leopard-skin trousers.

It probably won’t sell much, but you know, I do have a kind of sneaking admiration for the concept, much as I shudder at the taste. It takes a certain kind of guts to make a rum that tastes so crazily off base as to appeal to not just the 1%, but the 1% of that 1% who would welcome the adventure, appreciate the uniqueness and throw caution to the winds when drinking it. Because, for sure, there are very few rums in my whole experience which are anything like this Fijian popskull.

Just be warned – It’s an absolute animal of a drink to have if you’re not prepared. 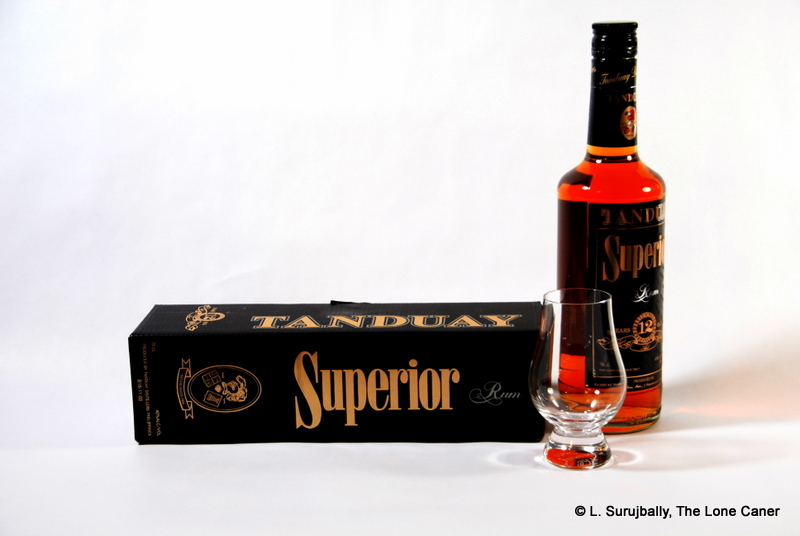 Some rums just upend all expectations, and maybe even redefine your assumptions.  Smooth, amber-dark, just sweet enough, and with a body and a finish that simply don’t give up, Tanduay Superior 12 year old is like that. Where on earth has this rum been, and why can’t I find it in Calgary?

A very affable individual from my office named Rainerio was heading off home to the Philippines the other day, and knowing there were interesting rums to be found there (though unashamedly confessing ignorance of exactly which ones those were since I had never had any) I went down on bended knee, indulged myself in a paroxysm of weeping meant to soften any stony heart, and begged him to bring back a sample for me to review.  Well, I exaggerate a bit for poetic effect, but I did ask.  And Rainerio very kindly brought me back a bottle of this  stunning 12 year old.  Hell I would have been satisfied with any local popskull, and to get something so all-round excellent was a like getting an early Christmas present. 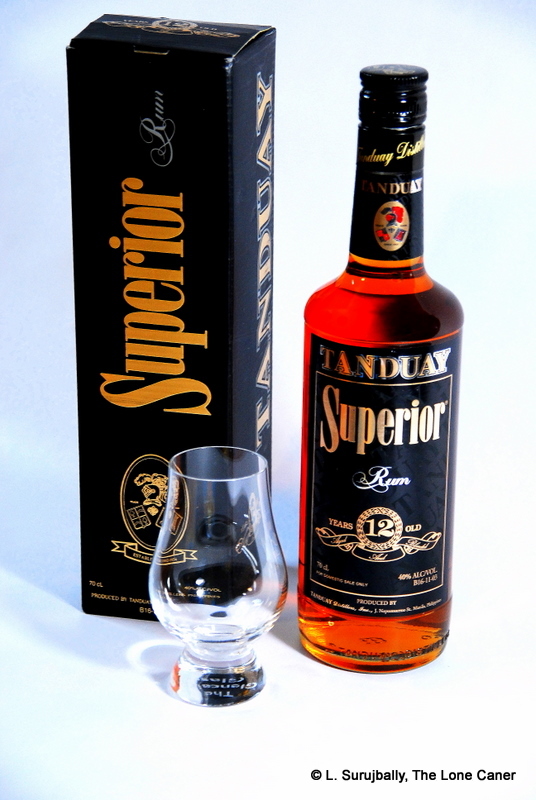 Tanduay is one of the most popular, if not the most popular, make of rum in the east, particularly the Phillipines, and made by the Tanduay Distillery out of Manila.  Like other major distillers – Bacardi and Diageo come to mind – they have a complete range, from light to dark, from the very cheap to the very expensive, and they have been in operation since 1854, which pips Bacardi by, oh, seven years. Yet, for whatever reason – distributors ignorance, lack of channels, unfavourable tariffs or whatever, you really have to look around to find it in North America (my research suggests it may be more readily available in Europe) and yet it may be the third most popular brand of rums in the world.

The rum took my hand and took me along with it: medium heavy body, coating the tongue with a sort of oiliness I have only had with DDL’s more aged rums.  There was just enough sweet to the Tanduay, and the caramel and vanilla notes were now joined by something softer, perhaps bananas or a tamed light citrus. It slides smoothly down the throat and let me tell you, the fade is simply awesome.  Long and smooth, with one last soft gasp of breathy fragrance wafting back up to remind you of what you just had, and inviting you to revisit the experience with another try.

Unless a distributor for this rum is found or whatever has stopped the importation of Tanduay to Canada is resolved, I doubt I’ll ever taste it again (though maybe I can ask Rainerio to bring another one back in a year or two). I’m glad I had a chance to try it: just when I thought I had a handle on the major brands of the world, this one came out of nowhere and smacked me upside the head.  If nothing else, it says that though I may have tasted and reviewed more rums than most, there are always gems from other places previously unconsidered that will just amaze, delight and please with their overall excellence.  This is the first one in my experience: I know there’ll be others, but Tanduay gives me hope that I’ll actually be able to find them, and share that delight with all those who one day read the reviews I put up about their quality.