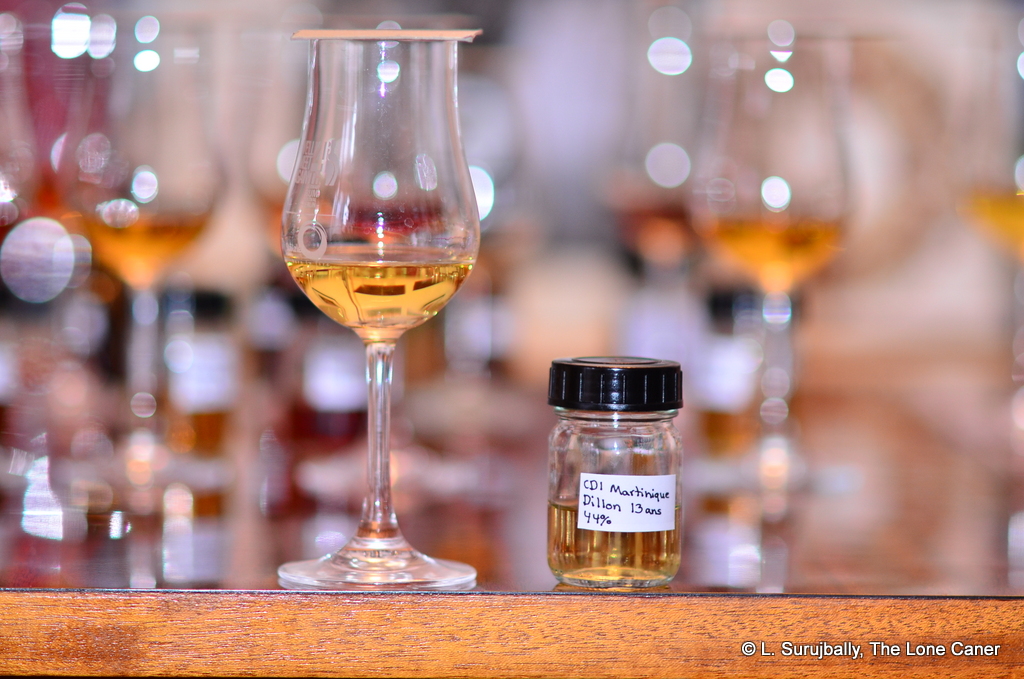 The small Martinique brand (once a distillery) of Dillon is not one which makes rhums that raises fiercely acquisitive instincts in the cockles of anyone’s hearts, if one goes by the dearth of any kind of online commentary on their stuff. When was the last time you saw anyone, even on the major French language Facebook rhum clubs, crow enthusiastically about getting one? And yet Dillon has a complete – if small – set of rhums: aged versions, blancs, mixers etc. And those that I have tried (not many, which is my loss) have been quite good.

Today’s subject is not a distillery brand, but from one of the independents, Florent Beuchet’s Compagnie des Indes. Long time readers of these reviews will know of my fondness for Florent’s selections, which mix up some occasionally interesting offbeat rums with the more common fare from Central America and the Caribbean that all the indies bottle. For example, there was the Indonesian rhum released in 2015, the recent 10-Cane rum, rums from Fiji, some from Guadeloupe, and even Guatemala.

So here is a rhum from Dillon, which nowadays has its distillation apparatus located in Depaz’s facilities (see biographical notes, below), and this makes Dillon more of a brand than a complete cane-to-cork operation. It’s a single barrel offering, 2002 vintage which was aged in Europe for 9 years of the total of 13, bottled at a quiet 44%. Note that two Dillon barrels were bottled in 2015, MA56 with a 298-bottle outturn, and MA67 with 322, but my sample didn’t mention which it was so I contacted the source, the Danish rum tooth fairy Nicolai Wachmann…and it was MA67 for those who absolutely need to know. 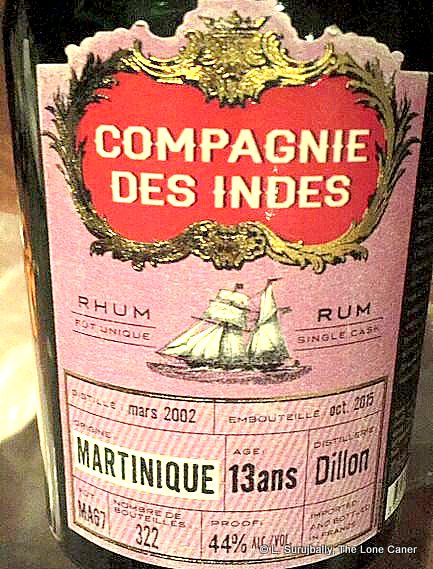 Whatever the case, I must advise you that if you like agricoles at all, those smaller names and lesser known establishments like Dillon should be on your radar. Not all of the rhums they make are double-digit aged, so those that are, even if farmed out to a third party, are even more worth looking at. Just smell this one, for example: it’s a fruitarian’s wet dream. In fact, the aroma almost strikes me like a very good Riesling mixing it up with a 7-up, if you could conceive of such an unlikely pairing. Lighter than the Savanna HERR and much more delicate than even a low-strength Hampden, it smells crisp and very clean, with bags of pineapple slices, green grapes, apples, red grapefruit, bubble gum and lemon zest, all underlaid by a nice nutty and creamy white chocolate and some vanilla and flowers.

Strength is a major component of the assessment of a rhum like this. 44% is the wrong ABV for a woody and character-laden deeper rum like, say a Port Mourant (I think – your mileage may vary), but for a lighter and more scintillating agricole such as the Dillon, it’s spot on. Much of the nose bleeds over to the taste: sprite, grapefruit, lemon zest, pineapples, strawberries, and also ripe mangoes, green grapes, apples, pears and a touch of cinnamon and vanilla. At first it feels too light, too easy, but as one gets used to the underlying complexity and balance, a really well-assembled piece of work slowly comes into focus. And this is the case even on the finish: it’s tight, medium-long, and always completely under control, never overstaying its welcome, never being bitchy, never hurrying off before the last bit of flavour – citrus peel, vanilla, whipped cream, pineapples – is showcased.

In short, though released some years ago and getting harder to find, I think this is one of those rhums that got unnecessarily short shrift from the commentariat then, and gets as little now – because it’s something of a steal. Dillon may be off the map for all those people who love posting pictures of their latest acquisitions from Hampden, WP, Fiji, Foursquare or the ultra-aged indie-release of a wooden still rum; and it barely registers in comparison to better known agricole makers like Saint James, Clement, Damoiseau, Neisson or JM (among others). I just think it should not be written off quite so fast — because even for a single barrel release where singular aspects of the cask’s profile is what led to its selection in the first place, it’s a flavourful, well-layered, well-balanced dram that is at that a near perfect strength to showcase its attributes. And there are really quite a lot of those, for anyone desirous of checking out a lesser known marque.

Dillon was established in 1690 when the site of the distillery in Fort de France was settled by Arthur Dillon, a soldier with Lafayette’s troops in the US War of Independence. A colonel at the age of sixteen, he married a well-to-do widow and used her funds to purchase the estate, which produced sugar until switching over to rhum in the 19th century.

The original sugar mill and plant was wiped out in the 1902 volcanic eruption of Mont Pele, and eventually a distillery went into operation in 1928, by which time there had been several changes in ownership. In 1967 Bordeaux Badinet (now Bardinet / La Martiniquaise Group) took over, the mill closed and the original Corliss steam engine and the creole column still was sent up the road to Depaz…so nowadays Dillon continues growing its own cane, but the distillation and bottling is done by Depaz, which is owned by the same group.

Dave Russell of Rum Gallery, who actually visited the distillery, remarked that the creole single column still is still in operation and is used specifically to make the Dillon marque, perhaps in an effort to distinguish it from Depaz’s own rhums. 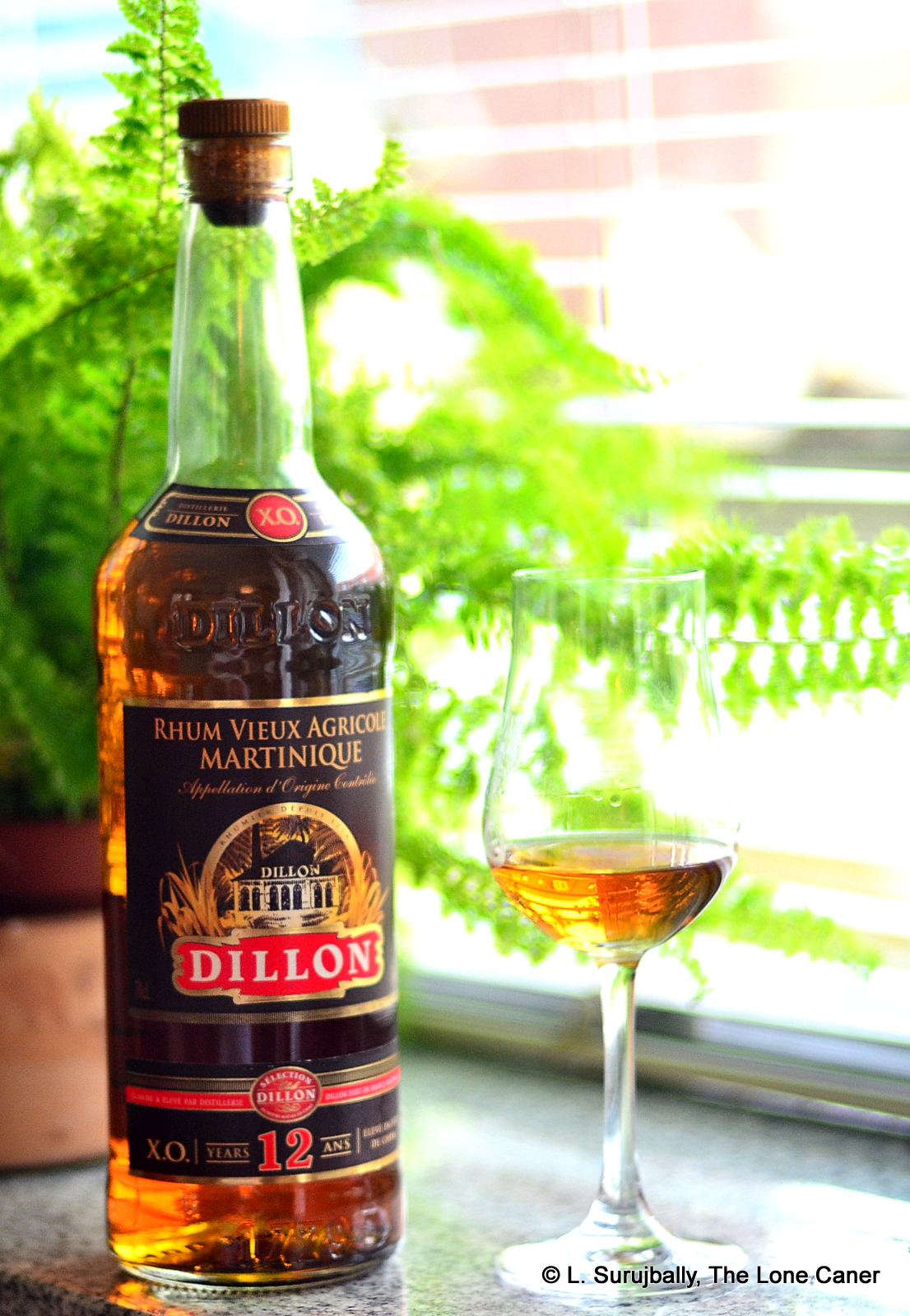