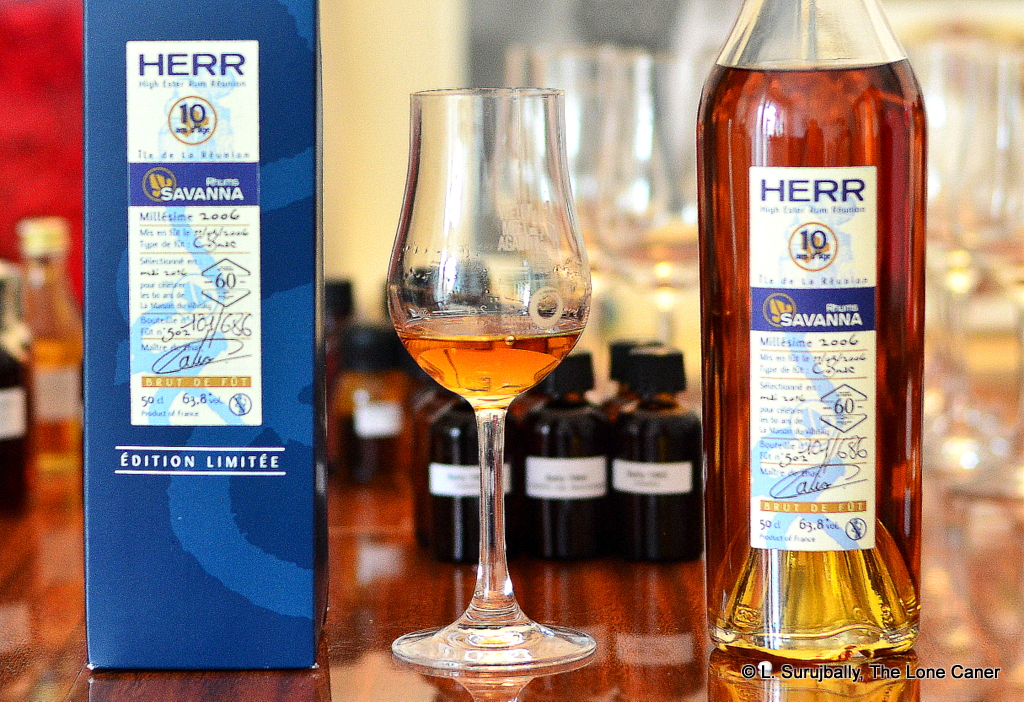 The Savanna Millésime 2006 High Ester Rum from Réunion (or HERR, as it is labelled) is a steroid-infused Guadeloupe rum mixing it up with a Caroni and a Bajan. It may the closest one will ever come to one of Worthy Park or Hampden’s Jamaican taste bombs without buying one, betters them in sheer olfactory badassery and is possibly one of the best of its kind currently in production, or the craziest.  It’s very likely that once you try it you’ll wonder where it was hiding all this time. It emphatically puts Réunion on the map of must-have rum producing nations with not just flair, but with the resounding thump of a falling seacan.

Just to set the background.  I had bought the Savanna Rhum Traditonnel Vieux 2000 “Intense” 7 year old back in April 2016 in Paris, and when I finally wrote about it, remarked on the way it was interesting and tasty and seemed to channel a good Guadeloupe rum in that it walked a fine line between molasses based product and an agricole.  Purely on the strength of that positive experience, I sprung for the HERR, and made some notes to get some of the other “Intense” and “Grand Arôme” Lontan series from Savanna as well (see “other notes”, below).  The molasses-based HERR was distilled in 2006, aged for ten years in ex-cognac casks, bottled at a hefty 63.8% in 2016, bottle #101 of 686, and released for the 60th Anniversary of the Parisian liquor emporium La Maison du Whisky.

Anyway, after that initial enjoyable dustup with the “Intense”, I was quite enthusiastic, and wasn’t disappointed. Immediately upon pouring the golden-amber liquid into my glass, the aromas billowed out, and what aromas they were, proceeding with heedless, almost hectic pungency – caramel, leather, some tar, smoke and molasses to start off with, followed with sharper notes of vanilla, dark dried fruit, raisins and prunes and dates.  It had an abundance, a reckless, riotous profusion of flavours, so much so that one could be forgiven for thinking that not only did Savanna throw in the kitchen sink in making it, but for good measure they included the rest of the kitchen, half the pantry and some of the plumbing as well.  Even the back end of the nose, with some overripe bananas and vegetables starting to go off, and a very surprising vein of sweet bubble-gum, did nothing to seriously detract from the experience; and if I were to say anything negative about it, it was that perhaps at 63.8% the rum may just have been a shade over-spicy.

Still, whatever reservations I may have had did not extend much further than that, and when I tasted it, I was nearly bowled over.  My God but this thing was rich…fruity and tasty to a fault. Almost 64% of proof, and yet it was warm, not hot, easy and solid on the tongue, and once again — like its cousin — weaving between agricole and molasses rums in fine style.  There was molasses, a trace of anise, a little coffee, vanilla and some leather to open the party; and this was followed by green apples, grapes, hard yellow mangoes, olives, more raisins, prunes, peaches and yes, that strawberry bubble-gum as well.  I mean, it was almost like a one-stop shop of all the hits that make rum my favourite drink; and it lasted for a long long time, closing with a suitably epic, somewhat dry finish of commendable duration which perhaps added little that was new, but which summed up all the preceding notes of nose and palate with warmth and heat and good memories.  There was simply so much going on here that several subsequent tastings were almost mandated, and I regret none of them (and neither did Grandma Caner, who was persuaded to try some).  It presented as enormously crisp and distinct and it’s unlikely to be confused with any other rum I’ve ever tasted.

Just as an (irrelevant) aside, I was so struck with the kaleidoscopic flavours bursting out of the thing that I let the sample remain in my glass for a full four days (which is likely four days more than anyone else ever will) and observed it ascending to the heights before plunging into a chaotic maelstrom I’m somewhat at odds to explain.  But one thing is clear – if the sharp fruitiness of unrestrained rutting esters is your thing, then you may just agree with me that the rum is worth a try, not just once, but several times and may only be bettered by the Lontan 2004 12 year old 64.2% made by the same company.

I said in the opening remarks that it might be the best of its kind currently in production, or one of the craziest.  I believe that anyone who tries it will marvel at the explosive panoply of flavours while perhaps recognizing those off-putting notes which jar somewhat with what one expects a rum to possess.  Having read of my experience, I leave it to you to decide which side of the divide you fall on.  The HERR is not so much polarizing as unique, and it demands that you accept it as it is, warts and everything, on its own terms or not at all.  If you do, I somehow doubt you’ll be disappointed, and may just spend a few days playing around with it, wondering what that last smidgen of flavour actually was. Sort of like I did.

Sorry, the comment form is closed at this time.