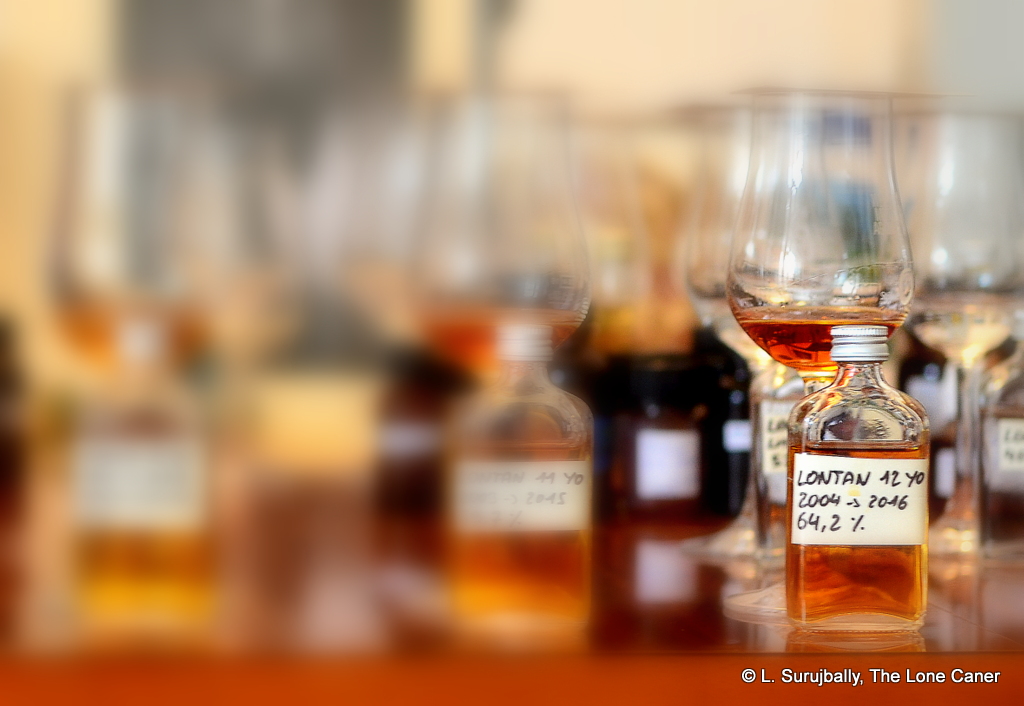 With the advent of the Hampden and Worthy Park rums which pride themselves on high ester counts, it seems that one of the emerging trends in the rumworld may well be such tasty, clear, bags-of-fruit rums with not just a single sapling populating the salad bowl, but an entire damned orchard. Yet on the other side of the world, Savanna has been doing this for some years now with their “Intense” and “Grand Arôme” lines, of which the reigning porn queen might well be the HERR 10 year old that so impressed me.  That rum was startling and original, seemingly cut from wholly new cloth, bottled at a massive 63.8% and aged in cognac casks and my drool dripped into the glass almost continuously as I tried it (well…I exaggerate for effect….but not by much).  And yet, Savanna made one even better than that one – it’s this rum, a Grand Arôme, a rock solid full-proof 64.2% rumzilla that encapsulated all the amazing potential Reunion had to offer, and came in ahead of its own siblings by a country mile.  I’ve now tried about ten rums from Savanna, and it’s my firm belief that this is the best of them all (until I find the next one).

Speaking of Savanna and the stats.  I’ve written a small bio of the company, so won’t bore you with that again, so let’s just reel off the usual details so you know what you’re drinking if you ever try it. It was distilled in 2004 and bottled in 2016, with a strength as noted above, just north of 64%.  It was made on Savanna’s traditional column still (not the discontinuous one of the HERR), and Cyril, in his own excellent 2016 review, writes that it is made from the fermentation of vinasse and molasses, and for a longer period than usual – 5-10 days.  As before it was fully aged in ex-cognac casks.

Pause for a second and just look at all those production notes: they make no mention of additives, but for my money they didn’t add anything, and come on, why would they need to? It’s like they pulled out all the stops to make this thing a flavour bomb of epic proportions. Fermentation, distillation, ageing, the works, all that was missing was some pineapples dunked directly into the vat.  And when I tried it, the results spoke for themselves.

The hot, fragrant nose began with dusty cardboard, the nostalgic feel of old boxes in an attic, of a second hand bookshop crammed to the rafters with dry books of ages past nobody now reads.  Ahh, but then it changed – acetone and nail polish mixed with lots of honey and rich (but not tart) flavours of bubble gum peaches, prunes, vanilla, cinnamon and a light trace of brine and avocados drizzled with lemon juice.  Cocoa and some coffee, reminds me some of the Varangue Grand Arôme 40% white, but better behaved and much better constructed. My God this was rich — I spent perhaps half an hour just nosing the thing, and even called over my mother (who was annoyed I wouldn’t let her near my samples that day and was sitting in a huff in the kitchen) to give it a sniff.  Her reaction was so positive I feared for her health and the safety of my table, but never mind – the important thing to note is that even a rum novice loved it, even at that strength.

The real treasures came on the palate, which was firm, strong and intense, as befitted a rum brewed to a ripsnorting 64.2%.  Here the fruits – those amazing, full bodied fruits – blasted out front and center.  The intensity and variety were amazing, yet they lacked something of the single minded purity of the HERR, and somehow manage to create a melange without a mess, each note melding perfectly, combining the ongoing cereals and dusty book aromas with the sweet richness of the orchard without losing the best parts of either.  Some rubber and sweet caramel and honey, warm papaya, and then the fruits themselves – ripe mangoes, peaches in syrup, cherries, cinnamon, cloves, almonds and that yummy Pakistani rice pudding called kheer. There was aromatic tobacco, a faint citrus tang (candied oranges perhaps) and it all led up to a clean, biting finish, gradually winding down to close with green grapes, hard yellow mangoes, lemongrass, caramel and breakfast spices.  Ladies and gentlemen, we have ourselves something amazing here.

When The Wonk and I were discussing this rum, he remarked (rather disbelievingly) that it had to be quite a product to compare with the 89 points I gave to Velier’s 32 year old PM 1975 a few days ago.   It certainly is that, but really, the two aren’t strictly comparable, as they are quite different branches of the great tree of rum.  The Lontan lacks the dark heaviness of Demeraras generally and the Port Mourant specifically, doesn’t have that wooden still licorice background or its overall depth.  In point of fact The Lontan 12 has more in common with the Jamaicans and perhaps even agricoles, while being distinct from either one. In that observation lies the key to why it’s special.

I noted the other day that one of the unsung heroes of the subculture is likely the below-the-radar rums of St Lucia.  Here’s another company not many have heard of that’s making some pretty big footprints we should be tracking.  Because in summing up Savanna’s remarkable rum it’s clear that it’s a shimmering smorgasbord of extravagant and energetic and well-controlled tastes, melding a nose that won’t quit with a body that could make a metaphorical nuncio review his vows of celibacy.  It mixes a glittering clarity with excellent balance, strength with softness, is crisp and complex to a fault and what we’re left with after the fact is the memory of an enormous achievement. To say the rum is “not bad” is to undersell it.  To say it’s good doesn’t cut it. What we need to do is to admit it’s just about great, and oddly, part of that admission is also that it’s made by a relative unknown, without any of that emotional baggage we would bring to, say, a Velier or a Samaroli, a Rum Nation or a product from the Compagnie. I enjoyed it thoroughly.  I think it’s wonderful. It’s a gift to true rum lovers who want to try something they haven’t experienced before, in their ongoing (often lonely, sometimes thankless) search for the next new rum to treasure.