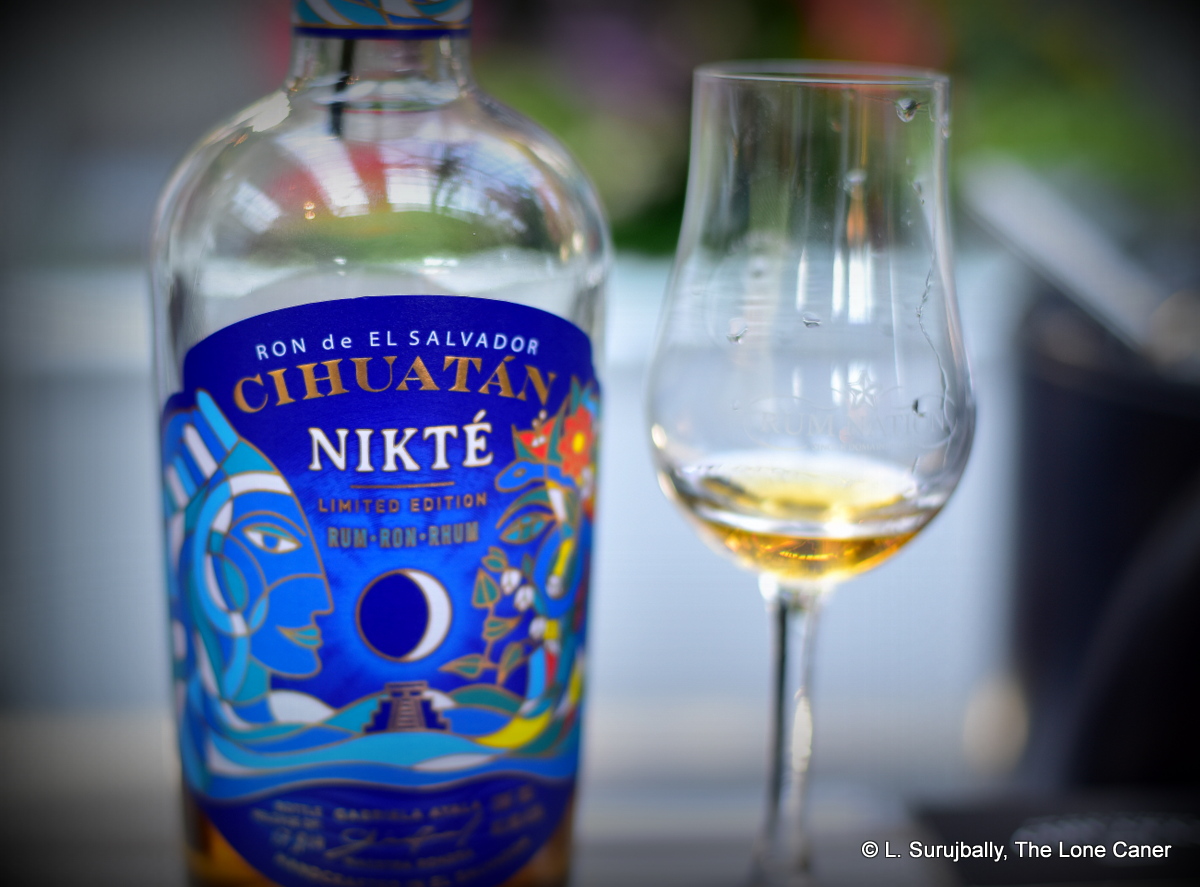 Three years ago I tried and later wrote a review of the 8-year-solera Cihuatán rum from El Salvador (bottled at 40%), and noted rather disappointedly that “this was a remarkably quiet rum.” Essentially, I regarded it with some indifference. At the time, Paul Senft of Rum Journey and I were trading notes and he told me they had a 12 year solera variation slated to be released, and Cihuatán themselves told me they were working on some more limited editions of their own.

Well, I moved on, liking but not completely won over by the brand at that point, and while I never did source the 12 year solera, I kept a weather eye open for anything they made that might pop up in years to come. Then in 2019, I caught wind of the special Nikté limited release — though one would perhaps be forgiven for asking what is so terribly limited about 17,914 bottles — and resolved to try it for a number of reasons. One, it was a follow-up to the 2017 review to satisfy my own curiosity; two, it was made by a maestra ronera, Gabriela Ayala, and that deserves respect and more than just a passing acknowledgement; three, it was issued at north of standard, stronger than the usual Latin rums I’ve tried in the past made by primary producers; and four, I just wanted to see if it really was special. Marketing works on impressionable young minds like mine. 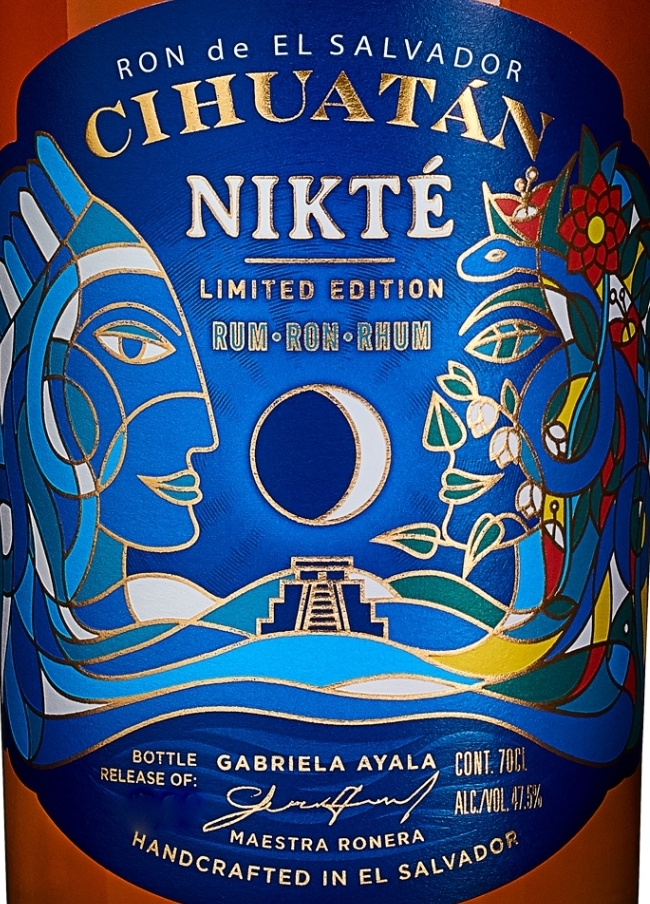 The name of the rum (or ron, if you will) relates back to the Mayan motif that has been part of the brand from the inception: Cihuatán comes from the name of an ancient Mayan settlement that once existed very close to where the distillery is currently located. It translates into “next to the woman”, referring to a mountain nearby which looks like a sleeping woman in silhouette. The original glyph on the label (Tlaloc, the Mayan god of water) has been replaced by the moon goddess (Ix Chel), and a feminine version of the flower known as Sac Nicté in Nahuat (“sac” means white) as her stylized floral twin, all in homage to Kay Nikté, the Mayan festival of flowers. And I have to concede, that’s one really pretty label, colourful and well laid out – if the intention was to get me to see it on a shelf and stop, stare and maybe buy it, yeah, they succeeded pretty well there.

Based on its tasting, however, the case of unquestioning purchase is harder to make for those who have been part of the rum renaissance over the last ten years, and who prefer something more powerful and distinct (although not for those for whom it was made, perhaps). The ron is decidedly Spanish/Latin in style and influence and the strength — 47.5%, unusual for a rum from Central America — only marginally raised it in my estimation. Consider first the nose – it was quite sweet, with scents of marshmallows, caramel, vanilla, ice cream and flowers (really light jasmine), and the warmth and depth of a loaf of bread fresh from the oven. What it was, was soft, and easygoing – quite an achievement for a rum dialled-up as this was. I had expected something a bit fiercer, but no…

Overall, this rum is a soft sipper’s dream, but won’t do much for a hogo-lover or wooden-still worshipper. I’ve been warned by many in the past not to decry rums made for palates different my own, so I’ll simply make note of the matter and leave you to make up your own mind. Personally, I think it’s better than the 8 year solera, and has more going on in its jock, but remains too soft and even too sweet and even the strength can’t entirely make up for that. Yet kudos have to be given for taking the brand in these directions to begin with – for anyone who likes the soporific, relaxed charms of the Spanish style rons, this is a step up the ladder that is a few orders more interesting, more complex and plain out better than its 8 year solera counterpart. 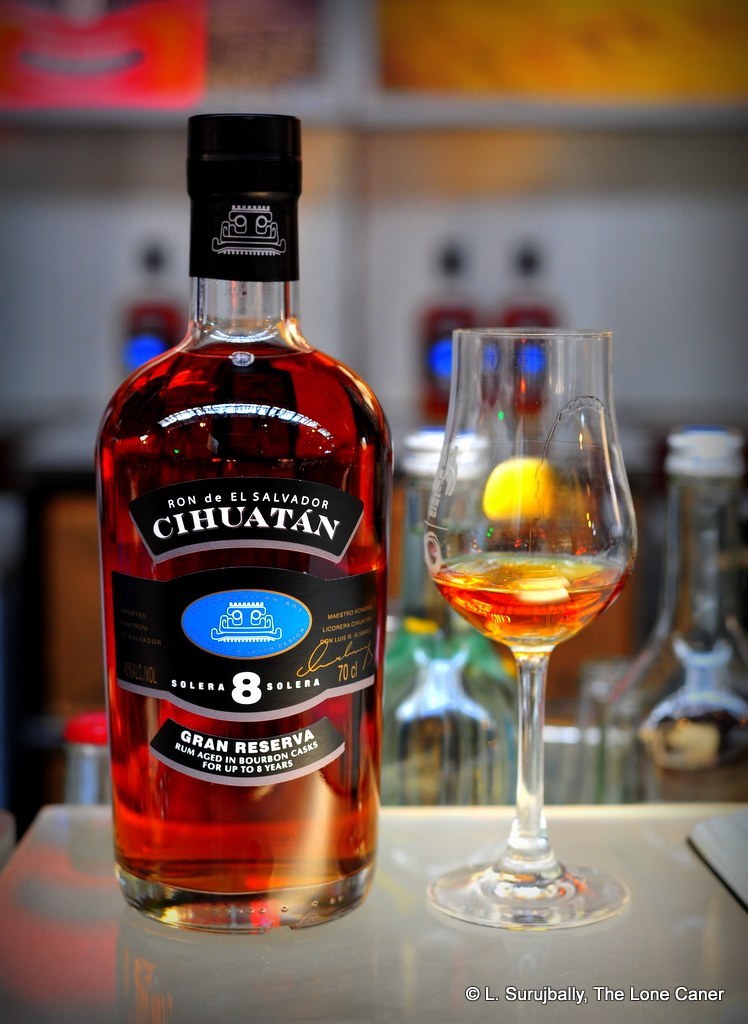 Back in 2015 I wrote about the Ron Maja 12 year old rum which purported to be from El Salvador based on the place of origin of the family behind it, but really wasn’t when one considered the location of the production process. Here’s another one from that country, which earns its geographical appellation somewhat more, though overall, there isn’t much more to it than its cousin.

The dark gold Cihuatán is a molasses-based 40% Salvadorean rum aged in white oak ex-bourbon barrels, with the base distillate going into the 5-layer solera system in 2004 for eight years – that does not make it an eight year old rum, of course, just a rum with components up to eight years old inside it. It is made by Licorera Cihuatan, itself a subsidiary of Ingenio La Cabaña, one of the larger sugar concerns in the country (it was established in around 1920). It is a diversified company located north of San Salvador, and its main business is based on a sugar cane plantation, a sugar mill and a modern alcohol plant (built in 1999) with a multi-column still that produces various alcohols and liqueurs for both the leisure and industrial market. Sometime in the early 2000s the company wanted to ride the wave of rum’s resurgence as a premium drink and initiated their own brand, consulting with Luis Ayala (publisher of Got Rum? magazine) in the process. What came out the other end and hit the shelves in 2015 — mostly locally and in Europe — was this rum, which adheres to all the markers of a mid-tier solera without trying to reinvent the wheel. 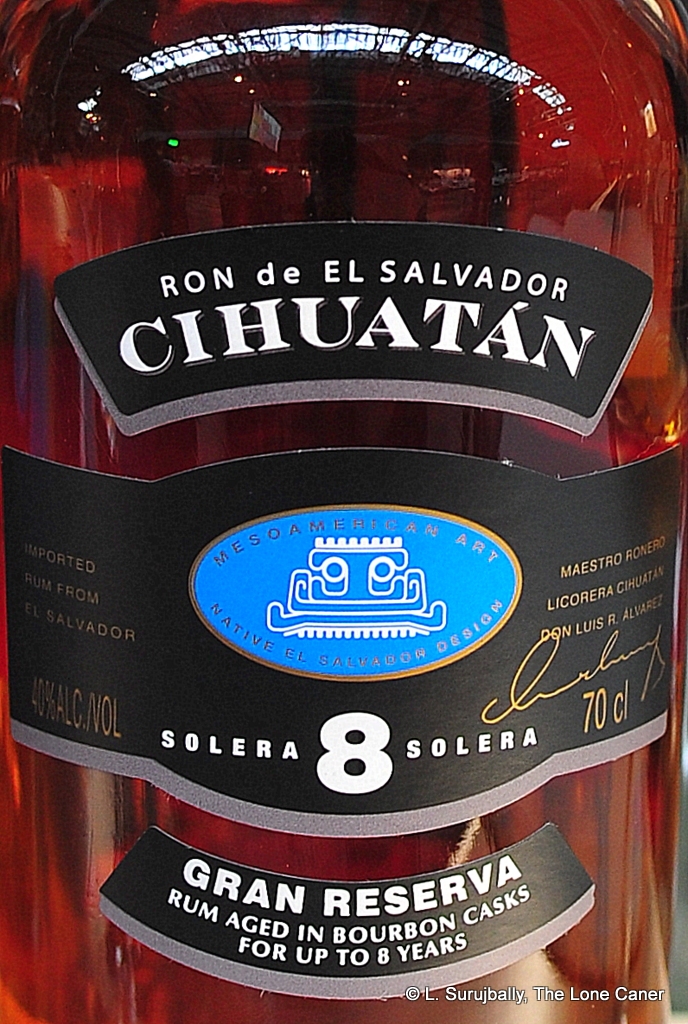 I’m not making a case for there to be something fantastically original about any new rum to hit the market, of course, and one cannot expect that from a solera in any case. Yet even by those standards, this was a remarkably quiet rum. There were no out-of-left-field smells emanating from the glass after the initial pour. No arrogant or aggressive fumes of pungency and power. No cask-strength olfactory bruising, simply a warm nose redolent of cherries, plums, some light florals, a touch of leather and somewhat of an excess of vanilla; plus, after some minutes, some oaken tannins. Nothing to write home about – rather simple, actually.

That impression continued with the taste, mild and pleasant though it was – initially it was simply too sweet, and the vanilla was too much in the forefront. Some cocoa powder, coffee grounds stayed in the background, leaving the vanilla to duke it out with cherries and more plums, sugar cane sap and a touch of citrus, however indistinct it might have been. As I’ve remarked on several soleras before now, they tend to be more sweet than the norm, and much lighter, though with a good one there’s always some edge to the experience, with sharper citrus and fruity notes that ameliorate the saccharine. Here this was not the case, and even with water not much more could be picked it out, and so it all led to a soft and warm exit, with some floral notes rejoining the vanilla party.

All right, so I appreciate that it’s a solera (with all that this implies) and it may have some eight year old in it, and it may be part of the revival of rum production in the country (a laudable effort, as I remarked in a comment on the Maja). But for me it needs some more work. Vanilla too much, sweet could be toned down, the overall gentleness could maybe be tarted up a touch. Don’t get me wrong, it’s a fine and easy rum with a decent, if uncomplicated palate – it reminds me of the Travellers rums, or Panamanians in general, or of a low rent Panamonte. Which might be why it didn’t make any kind of worldwide splash outside the festival and awards circuit.

In the first three years or so of reviewing rums, I started out with the commonly available, easygoing forty percent rums, which included quite a few soleras, and back then I liked them quite a bit. Nowadays I think they’re good for lovers of easier fare (or of Spanish style rons) who either can’t get or simply don’t like rums of cask strength aggressiveness. On that basis, this one works fine…if without flair. If you want a relaxing drink to have around a campfire somewhere, or to unwind after a bad day at the office, a soft, relatively uncomplex rum like this would be just right. That may be why – much like with the Maja — I’ll take one if offered, but would prefer to save my dinero for its slightly older cousin, the 12 year solera when it comes out.