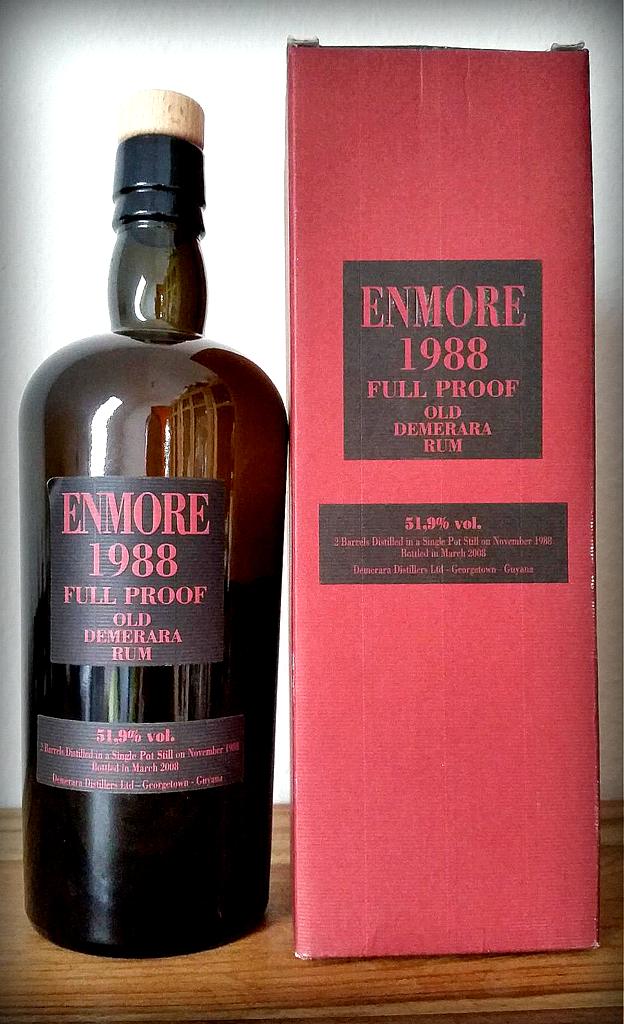 The 1988 Enmore vintage has quite a lot of siblings from the same year: Berry Brothers, Bristol Spirits, Compagnie des Indes, the Whisky Agency, Rum Cask and Silver Seal have all issued rums from that year, with varying ages and qualities — some more and better, some less and less. But all are variations on a theme, that of the Enmore wooden still from Guyana now housed at Diamond, and perhaps only rum geeks with their laser-like focus bother to get them all in an effort to write a dense analysis of the finest, most minute differences. This one is, to my mind, one of the better ones…even though it’s likely that this is not from the Enmore wooden coffey still, but the Versailles single wooden pot still (see other notes below).

Nose – Yummy. Surprisingly light at first nosing, then develops some heft and complexity after a few minutes, so don’t rush into it. Coffee, petrol, wax notes at first, opening up into oak, fruits, anise, olives, prunes, dates and not-so-sweet fruits and molasses. It’s deceptive, because at first it doesn’t seem like much, and then it just keeps coming and providing more and more aromas. Just because it starts quiet and unobtrusive sure doesn’t mean it ends up that way.

Palate – Coffee, oak, fruitiness, some toffee, wax and shoe polish open the show, as well as being briny and with olives galore plus a little bit of sour cream – these come out a little bit at a time and meld really well. Lemon zest, coconut and background anise notes develop as it opens up (this is definitely one you want to take your time with). It’s crisp and clear, skirting “thin” by a whisker, yet even so, satisfactorily rich, tart, creamy and flavourful. There’s a even a wisp of molasses lurking in the background which is quite pleasant. It’s warm, well-balanced, and pretty much under control the whole time.

Finish – 51.9% is a good strength: it allows the finish to go without hurry, as it heads for a creamy, briny, lemony and licorice-like exit, with perhaps some coffee grounds and bitter chocolate wrapping up the whole experience in a bow.

Thoughts – Two years ago I rated it 89 points in Paris. This time around, trying it with a few other Enmores (including the DDL Rare First Batch Enmore 1993), I felt it remained an excellent product, even though it slipped just a little in the company it kept. But just a smidgen, within the margin of error, and it remains a great exemplar of the wooden stills and the country that no-one would ever be ashamed to own, and to share.