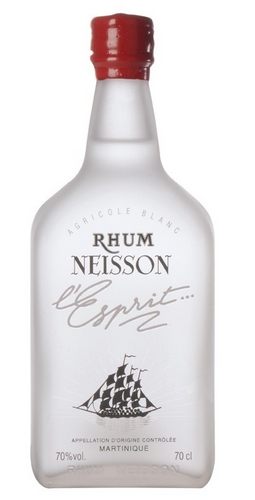 The fourth in the Rumaniacs Neisson lineup (though I’m sure they will be more), this thing is a massive falling anvil of oomph, and takes Le Rhum Par Neisson (R-053), also a blanc, out behind the schoolyard and whomps it with an extra twenty degrees of proof…and while the previous blanc elicited strong opinions for and against its quality, thus far I think the general consensus of this one is that it it one hell of a white rhum, to be had with a mixture of caution and enjoyment.

Nose – Sharp as an axe to the face. Unpleasant? No, not at all. Some brine and olive notes, with somewhat less of the herbal, grassy aromas one might expect. Much like a sweetish tequila, and the distinctive Neisson profile emerges rapidly – apples, green pears, tart red guavas, floor polish, leather shoes, some swank, coconut and wax.

Palate – Massive and powerful, heated like a brimstone coated pitchfork. Sugar water and brine, more olives, sugar cane sap, acetone, rubber and wax, stewed prunes and a general feel of a tamed clairin. It’s powerful to a fault and can be had in moderation or without it, but either way, it never stops giving up some seriously intense tastes.

Finish – Long, long long. Sharp, aromatic. Leather, aromatic tobacco, cocnut, musky herbs, fennel and rosemary. One finishes this thing breathing hard, but ennervated to a fault, just at having come through the experience in one piece

Thoughts – It’s good, quite good, but my general opinion is, having tried it twice now, that perhaps whites walking around with such a plethora of flavours, might be best between 50%-60%. I liked it a lot…but 70% may be just a shade much for the average drinker, in spite of – or maybe because of — how rumblingly, numbingly strong it presents.