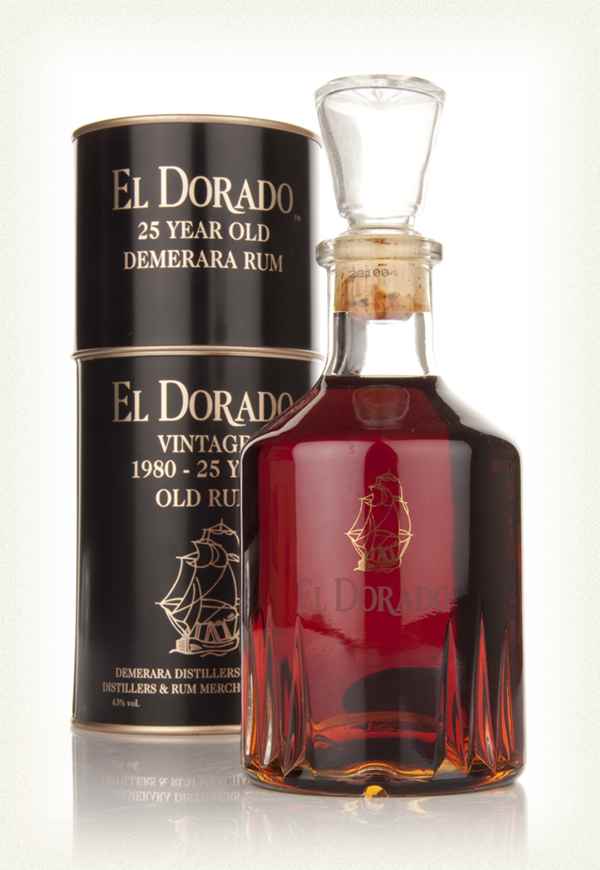 In the beginning DDL made the El Dorado 1980 25 year old and it was good. The rum pundits looked upon it with favour, tasted and smiled and pronounced it great. For it was greatly aged and unique and well presented and the people were pleased and parted willingly with their hard-earned coin. But then, lo, the world around it moved and changed, and darkness moved upon the face of the cognoscenti, for as the stars turned overhead, other rums were made, better rums, stronger rums, purer rums — and the El Dorado 25 was loath to change with the times. Verily, it was seen to be a mere mask of greatness without actually being great, having been corrupted and adulterated by the sly serpent of sugar. And those very persons who heretofore had sung its praises and made sweet sacrifice of good yellow gold at the altar of DDL, now turned their faces from its twisted taste and denounced its falsity. But many disciples stayed faithful to the heavy sweetness of the rum, hearkened on to its seductive call, and continued to make obeisance to its false promises.

And it came to pass that the Lone Caner, slinking furtively behind his better-known fellow acolytes of the Order of the Rumaniacs, finally dared also to walk through the abyss, to investigate reports and rumours of this fabled beast. Armed with only his trusty pen as weapon and notebook for shield, clad in not-quite-righteousness and supposed knowledge gleaned from years of study in matters of The Cane, he went quite into the lair of the legendary rum, to there do battle and come away with the flame of true knowledge. Was indeed the El Dorado the mythical sugar demon denounced from many an evangelical pulpit? Or did evil rumour and the jealous despite of the followers of the New Faith unfairly malign a misunderstood denizen of the rumiverse?

And upon reaching the very centre of the bottle’s domain, admired the Caner the golden etching of the flagon. Poured into the glass the Caner did his hard earned sample for which he had sacrificed so much. Smelled it with overlong snoot, inhaled into much abused lungs, as he drew into himself the olfactory essence of the dram, fearing not, for the Rum Spirit was within him, his alcoholic belches were the stuff of legends unto themselves, and he was far too witless for fear.

Richness there was, immediate, for the scent of the rum spoke to the fair stills whose puissance had been taken by the Makers and through magic and incantations and the tears of virgins, been rendered down into the brown elixir worshipped in times past by the people as a Great Spirit. Enmore spake commandingly, and Vesailles alongside, and perhaps a whisper of the fabled and elusive Uitvlugt too, all breathing life into the rich nose. Burnt sugar there was, and nougat, coffee, burning cane fields, and anise, and the sweet aromas of fruit and licorice to make the hearts of children glad. But lo, what was this? Even as the richness was sensed, it congealed and became thick and cloying and the dread spectre of sugar surged forth from the darkness to do battle with the rum and the Caner. Too strong was it for resistance, and yea, the sugar vanquished all that came before it and the nose faltered and died upon the floor.

Struggled did the Caner, to raise his glass and taste the dark brown lass, but alas, bitter disappointment was his only reward. For by dint of sweet promises and the lure of earthly delights known to only a select few, the fair maiden of the El Dorado proved herself to be a faithless siren luring him to his doom. Drowned he was in the overwhelming blanket of sugar. Struggled he did to sense the dim light of vanillas and kiwi fruit and deep molasses, the soft caramels and inviting toffees and coffees and aromatic notes of tobacco. But nay, the Dark Spirits were merciless, and he failed in his quest utterly; and even the faint glimmers of anise and caramel and burnt sugar turned their faces from him and vanished sadly into the underworld, never to be seen again…leaving him only with remaining teeth decaying and tongue coated with sticky syrup, rending his robes and gnashing his teeth in the anguish of what he had been denied.

Then wroth was the Caner, for he had earlier loved this fair spirit, which had so misled him in his innocence and newbie-ness with shades of illusion now proven false. Raised he then his acerbic pen, readied he his trusty notebook. Furiously was the pen wielded and the ink stained the page as if he had spilled the rum running through his own veins. And he recorded for posterity his despite. For in his disappointment and his frustration, these were the weapons he meant to use to record the legend of this mythical rum and to speak truth to those who would continue to sing songs of praise to its purported magnificence.

Therefore, then, gentle reader, take thee heed of the glorious failure of one led to ruin by his misplaced admiration for a false idol, and go not into the abyss thyself. Let his misadventure serve as both warning and instruction, that great age and great price and a fair and sweet appearance are sometimes masks to deceive the unwary. Tread not lightly into congress with such strumpets lest ye be destroyed in thy turn.