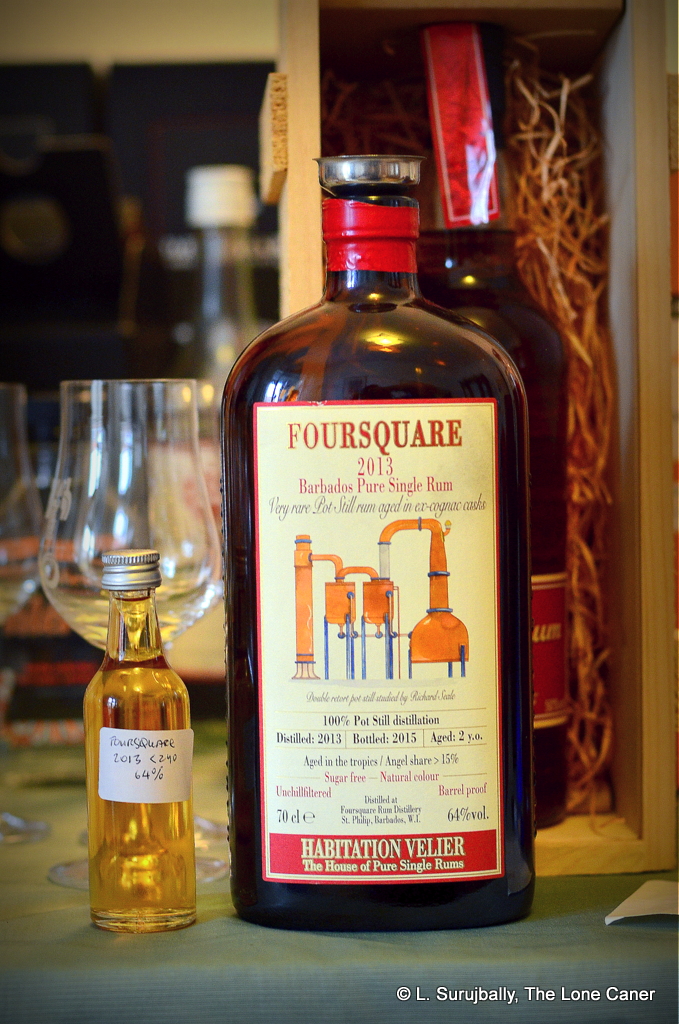 You’d think that after running through a set of Foursquare products over the last few months (here, here, here and here), that I’ve more or less covered what I wanted to and moved on.  Yeah…but no such luck. Still got a few more to come, starting with a representative of one of the most hotly anticipated rum “series” in recent memory: the Habitation Velier outturns of very young (even unaged) rums, you remember the ones, those with the cool pics of the stills of origin on the labels. They are pot still exemplars primarily from the Big Three – Jamaica, Barbados and Guyana — and while they are aimed at the general market, my own feeling is that it’s hardcore aficionados who are more likely to enjoy them, not those who are beginning their own personal journey of rum discovery.  You’ll see why in a minute.

This series of rums has several reasons for existing.  To begin with, as Velier’s reputation grew over the last five years Luca Gargano wanted to move along from the issuance of full proof, single still, aged-beyond-all-reason rums whose prices were climbing geometrically, and to collaborate more with other distilleries so as to get newer and more affordable juice out the door.  Second he wanted to prove that young rums could be every bit as exciting as the hoary old grandfathers (in rum years) with which he had originally established Velier’s street cred.  Third, he wanted a showcase for his proposed new rum classifications, the so-called Seale-Gargano system developed with himself and Richard Seale (or should it be the Gargano-Seale system?) which is gradually picking up some traction (though not outright acceptance…yet).  Fourth, he wanted to demonstrate a series that concentrated its full attention on pot still products, which these all are. And lastly, of course, just to laugh out loud, shake things up a tad, and make some hot-snot new rums that one could get excited about, which existed in their own universe not overshadowed by the oldsters from the ‘70s and ‘80s.

So, the details of this Bajan popskull from Foursquare: it’s a pale yellow two-year-old (actually two years eleven months according to 4S), issued at a rip-snorting frisson of sixty four degrees of unapologetically badass proofage, pot-still derived, and aged in 370-liter cognac barrels, which may be the single element that raised its profile above that of a standard young overproof and into the realms of some kind of inspired insanity.  And I use the term carefully, because anyone thinking that somehow Velier and 4S waved a magic wand and wove a masterpiece of smooth Bajan silk that took nearly three years to make, would have been in for something of a rude awakening if they tried it with that preconception in mind.  It wasn’t anything of the sort.  Sniffing it for the first time was like inhaling an incandescent blaze of sheet lightning. 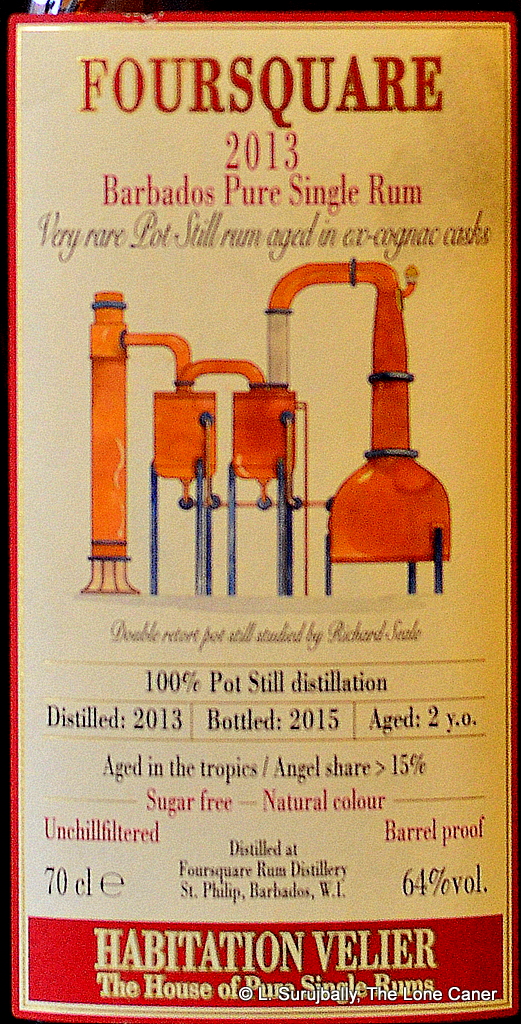 “Wtf is this?!” I remember asking myself in dumbfounded amazement as I jotted down my notes. It was hot vanilla and caramel shot through with flashes of brine and olives, all on top of a pot-still impregnated glue-gun. Swirling notes of black pepper, licorice and crushed nuts stabbed through here and there, with an amalgam of cooking spices bringing up the rear – salt and lemon pepper, a little paprika thrown in for good measure, a smorgasbord of sweet and salt and tartness.  It wasn’t entirely harmonious (are you kidding?) but a very distinct nose, suggesting that maybe FourSquare should experiment more with solo pot still rums instead of blending pot and column in their standard lineup.

Moving cautiously into the taste, I tried it neat first, then with water, and similarly intense flavours rose up and smote me righteously both times. Something of salty-oily tequila tastes were first off,  like a Maggi cube (or Knorr, if you’re in Europe) in veggie soup; nuts, dates and peaches followed, interspersed with background hints of rubber and wax, all very very intense and very firm, individual and discrete.  Water did help to tame this beast (to be honest, I took some masochistic pleasure in the sheer force of this thing and added it more out of curiosity) – that allowed some of the sweetness to finally emerge at the backend, though that was more like a thin vein of licorice, burnt sugar and cream than a caramel-toffee mother lode.  I must concede that for a rum this young, it had quite a flavour set – even the finish, which was surprisingly short (and dry) didn’t repeat the experience, but added a few extra hints of kero, fruit, black bread and kräuterquark (ask the Germans), plus a final flirt of honey.  I was left feeling enthused (and quite a bit breathless) at the end of it all, and tried it again a few more times over the next few days, just to see whether the experience mellowed at all with time (it didn’t).

Whew!  This is a hell of a rum. I’m going to go on record as stating it might be better approached not only with some care, but also without illusions and absolutely not as your first foray into rums of any kind. It is a bold, burning, singular rum of real strength and a really crisp profile which would not necessarily appeal to lovers of the kinds of hooch that Foursquare and St Nick’s and Mount Gay have been putting out for decades, because it’s not soft, and it’s not tolerant and it’s not easy.  What it actually is, is a young pot still product that hits both your expectations and your palate like a well swung sledgehammer and upends both.  Perhaps I’ve had so many rums in my time that I’m somewhat jaded and am on the lookout for stuff that goes off in different directions, but you know, that’s not what we have here, because it’s unmistakably the real deal.  It’s quite simply, unique: and in tasting it, I got a forceful reminder of all the amazing directions a rum could go, when made by masters who could actually dream, and dare, of making it.