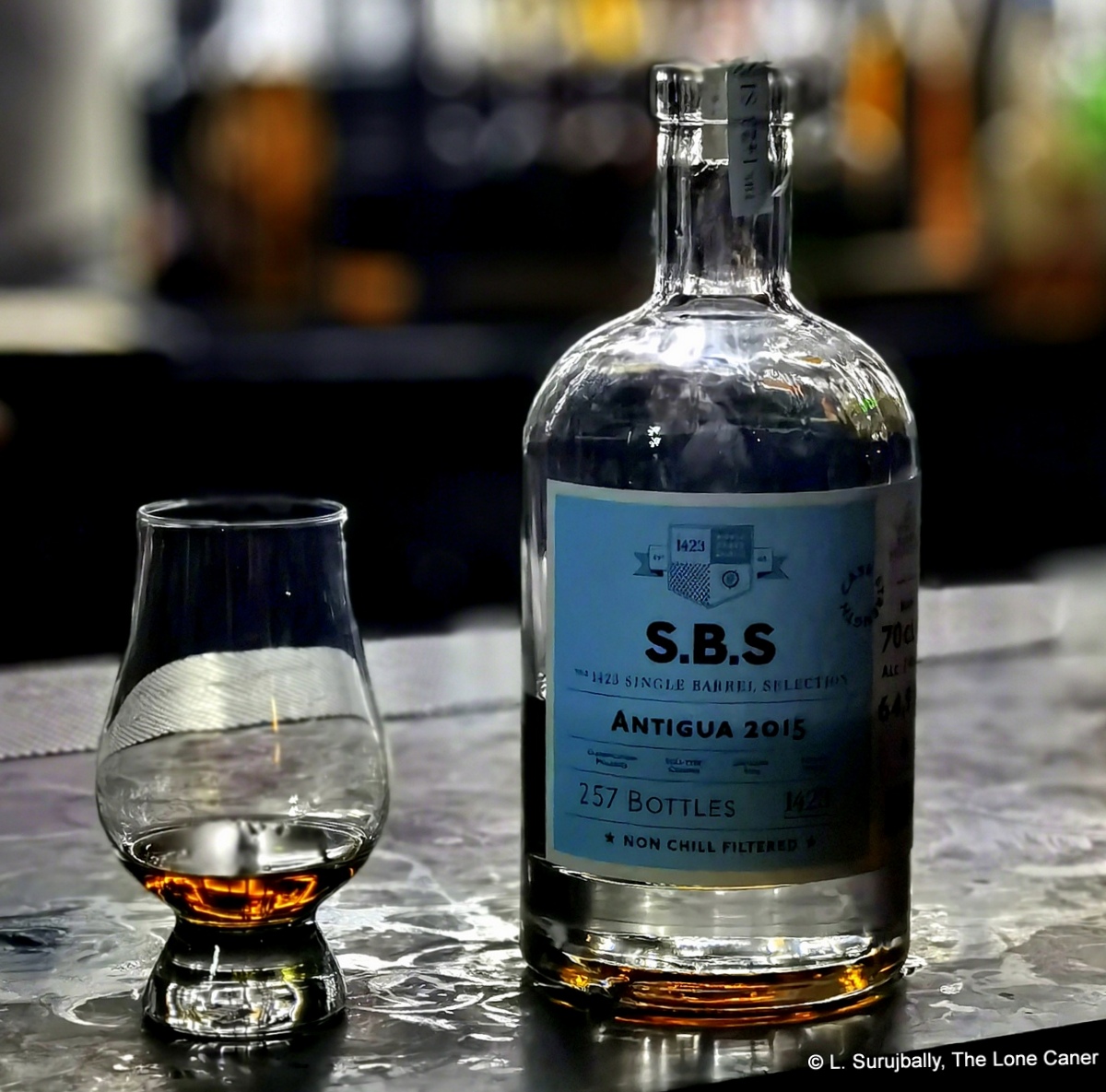 Based on really really true events, which may or may not be factual….

“A column still can produce this!” smirked Indy as he poured me a generous dram of the seven year old SBS Antiguan hooch and handed it over, daring me to refuse and making sure my head was bowed and cap reverently doffed. I imagine he would not have been displeased with some genuflection, so chuffed was he – and others – with this rum.

I considered my glass carefully, pen poised over the famed Little Black Book of Tasting Notes, trying to focus yet also look everywhere at once, because I was in the basement bar of The Proofing Room in London, there was a lot going around me at the same time, a ton of rum chums were in attendance, and the rum was quite a handful to unpack at short notice.

I had landed in the UK a few hours before (two hours late), scampered to my fleabag hotel, dumped my stuff, ran over the road to TWE to get some tasting glasses (shout out to Kelvin who was super helpful and fun to hang with in the short time I had there), then back out to meet the my vagrant itinerant friend Richard Nicholson (of NZ Rum Society fame) at the Black Parrot rum bar, and then, after sampling five or six rums, we high-tailed it over to the ‘Room where Kris Von Stedingk was magisterially holding forth on the new 2022 range of rums released by the Danish outfit of 1423. I was out of breath even before sidling in.

The joint was peppered with Visiting Royalty of Rum Geekdom: Dan Greifer was tending bar, Andrew Nicolls was feverishly making daiquiris with rum from his own brand of William George, Kit Carruthers of Ninefold was soaking up info and a glass with equal gusto, Keegan Menezes was down at the back, Indy and Jazz Singh of Skylark Spirits darting around making sure everyone had a charged glass, Vicki Ilankovan of Sated Online was mingling with her trademarked vivacity and energy, while others were calling hellos and pressing the flesh from all corners of the bar. And as Kris was in fine form with his presentation and we were derailing his spiel, Richard and I guiltily avoided his disapproving glare and snuck down to the back where the hoods huddle, and set up shop there.

I was glad it was the Antigua I started with, because that island’s distillery has been making great strides in its own experimental small batch production, dating right back to the work they were doing with the sherry cask edition back in 2016. What I had here was a rum they sold to 1423 – that Danish outfit, you’ll recall, which is part owned by Josh Singh, the benevolent buddha of badass we left at Paris’s Maria Loca bar in 2019 but who went AWOL for this one. Antigua Distillers not only produced the subject of my very first review (the 1981 English Harbour 25YO) but has a new high-congener, full-proofed rum of its own that is supposedly off the scale and which I’ve been lusting after ever since it was released. This rum was one of its progeny. 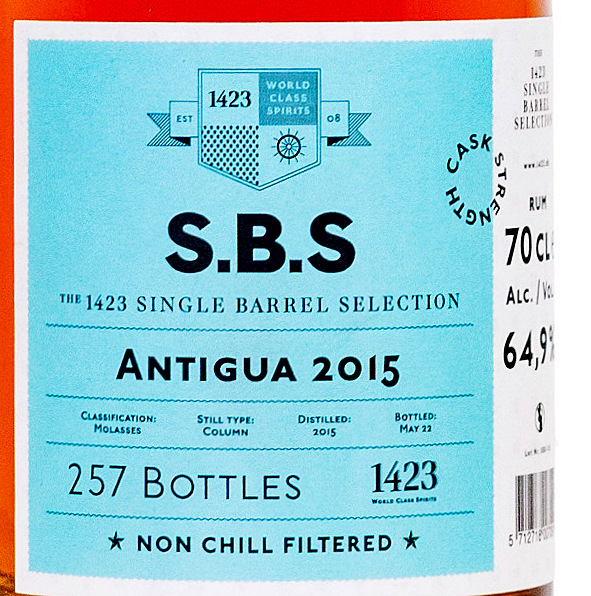 I tried to listen to Kris rattle off the specs for the rum because he was an interesting and engaging speaker, but the serious rum convo (i.e., the “party”) in my corner was so loud (which was all Richard’s fault, I swear, the guy is just so noisy!) that I could barely hear him, and evidently Kris couldn’t either because he shouted at us to pipe down in best Ratzo style — “I’m workin’ here!” — so he could keep with the program and inform the populace and maybe sell some damned rum. We all flipped him the bird and shouted cheerfully ribald insults, then shut up. I started nosing, and then scribbling. Even at play, the ‘Caner has to work sometimes, alas.

The nose of this kinetically powered 64.9% ex-bourbon-barrel aged rum was aromatic to a fault, and demonstrated once again that well assembled column still rums can be the equal of any other kind (even if just one barrel’s outturn). It smelled of vanilla ice cream, bubble gum, strawberries and an amazingly pungent mix of both light and heavier fruits like watermelon, green apples, grapes, peaches, and plums. Into this was interspersed more neutral aromas of bananas, pears and papaya, and a sort of rich whipped cream that would drive a cat to ecstasy. Even with the distractions of more rums, more mixes and the loud hum of conversation, I was able to appreciate a real mastery of the craft with what came out of that bottle.

All this went into the Book with some haste, because things were moving fast, and the bar surface in front of me kept filling up with more and new glasses that had to be guarded from the potential depredations of light-and-sticky-fingered rum enthusiasts (we are not known for respecting the finer points of personal property when it comes to the good stuff). Andrew, enthusiastic as anything, kept making more William George daiquiris (which were really good — but even a tippler as practised at pilfering as Richard had trouble keeping up with the rollout), and because Kris was moving smartly along with his presentation, Jazz and Indy continued bringing more and more SBS rums to us back-bench louts. Brazil, Denmark, Jamaica, Venezuela, Guyana, French Antilles…we had a minor United Nations of Rum going on here. Every time they poured another sample — which joined its partners on the countertop in front of me in an ever-expanding lineup — they observed how slow I was going, and regarded me with the sorrowful disappointment of skilled guilt-trippers – “What, Lance, is what we’re doing here not good enough for you?” “You don’t like SBS any more or what?” and (more cuttingly) “Eh eh, bai, I thought you were a pro, man!” (that stung).

I hastily concentrated on moving on to the taste, and here I must simply observe how vibrant and alive the rum was. Sharp — of course it was — and hot, yet that dissipated quickly, and the tastes were at all times there, thrumming, compelling, well defined and completely solid. And there were lots of them. Tart fruits notes of soft yellow mangos, soursop, ripe gooseberries, strawberries, dark cherries and almost overripe pineapple started the party off. These were balanced by nutty flavours combined with unsweetened chocolate, caramel, vanilla, cinnamon, coffee grounds and even a touch of herbs and spices (dill and cumin). Under it all was bananas and the creaminess of a sweet caramel latte which segued beautifully into a finish of epic duration, redolent of the sweetness of sugar cane, the muskiness of caramel and molasses, and the slight bitterness of freshly sawn lumber and ground coffee beans.

What’s amazing about the rum is how well it sips, even at that dramatic proof point. There’s no straining for effect, no sense of extra ageing or esterification added for your edification, no vulgar “let’s whip this out shall we?” backdam bragaddocio of codpieces compared (this sort of thing is left to visiting rum chums in seedy rumbars). It’s an astounding, amazing, astonishing rum, one where the initial experiments I tasted all those years ago seem have come to a kind of glorious fruition. I know the distillery has its own branded rums, ramped up, beefed up, torqued up, squirting esters and proofage in all directions, and I’ve been after those for ages. Until I get one of them, however, this will be a more than adequate substitute.

It was with some regret that I moved to other rums in the SBS’s lineup for the year – yet for the remainder of my time at the bar I kept a glass of this thing running, and eventually considered it the best of the lot, when it was all over. We laughed and talked and discussed rums and had a whole load of fun dissing each other, and finally the whole thing devolved into a raucous party and jam session which was then relocated to Trailer Happiness after we got chased out of the Proofing Room. Yet I remember this rum so well, even without the tasting notes. It showed that English Harbour’s Catch of the Day rum from 2018 which I had also enjoyed and continue to regard as an underpriced steal, had been no accident.

So, to wrap up this overlong “review” let me sum up for those who like it brief. SBS’s 7 Year Old 2015 High Congener Antigua rum is frikken’ phenomenal and I’m just annoyed with myself for not grabbing the damned bottle out of Indy’s hands when I had the chance. He might have decked me, and maybe I would have left the bar with head held high and feet held higher…but man, it would have been worth it to get this thing.