Rhum Mia is the product of a small distillery in Vietnam’s Ho Chi Minh City, run by two expatriate Frenchmen and which opened for business around 2017. I’m interested in eastern hemisphere rhums as part of my overarching fascination with all the branches of the rum tree, and while aged rums and rhums and rons not unnaturally get all the attention, the white rhums from that region are gradually beginning to gain more traction, and they exert a powerful fascination.

A few years ago I was gifted a sample by Reuben Virasami (the showrunner of Roob Dog Drinks which is well worth visiting) from this small outfit in Vietnam. I spent a fair amount of time on it and the backstory of the distillery, which I’ll add down below: but suffice to say, they continue to issue small batch cane juice rhums on their small column still, and these are then aged – I use the term carefully – in clay pots called chum which are also and traditionally used to hold local rice liquors during fermentation.

Clearly if there is any residual effect of these vessels, it would result in a taste profile that presents at an angle to more familiar agricole-style rhums, whether aged or unaged. I am not fully conversant with the way in which clay vessels impact the taste of a rum, since serious experience is lacking here, but at the least I would expect many of the herbal, grassy, “green” notes to be retained. The initial 2018 expression did have those but seemed too weak for its purpose, no matter how unusual and unique it was, and to some extent that continued a year later with the 2019 release which came into my hands via John Go in the Philippines (he writes most of the rum reviews for Malt-Review).

The rum retained the makers’ tradition of being bottled at 45%, and there were many similarities with the previous year’s rhum: the smell continued to reek of glue, bookbindings, and the newly cracked pages of a glossy French fashion magazine, rubber and plastic. But there was a rather unpleasant scent of damp cigarette smoke – the way it hangs in the air on a cold winter day, or smells when adhering to the latex gloves of your least favourite proctologist – and this did little to enthuse. It was only after some minutes that I could discern some sugar water, cucumbers, gherkins in light vinegar and one anaemic pear, and a curious minerally smell. Overall it seemed less a rhum than a spirit with some rummy components.

On the palate, that cigarette ash note never really went away, though thankfully it remained subtle, joined by damp drywall, glue and dust for a few minutes, and then fading gently away. From that point on, the dominant flavours were watery fruit – pears, watermelon, white guavas, kiwis, ripe soursop minus the “sour”, and yoghurt. Melons, papaya and some lemon-flavoured sugar water raised the profile a bit, though there was also an odd minerality sensed here and there, something along the lines of licking wet granite. The finish was all right – light watery fruits, a touch of lemon zest, some grassy notes, and a touch of rosemary and dill. 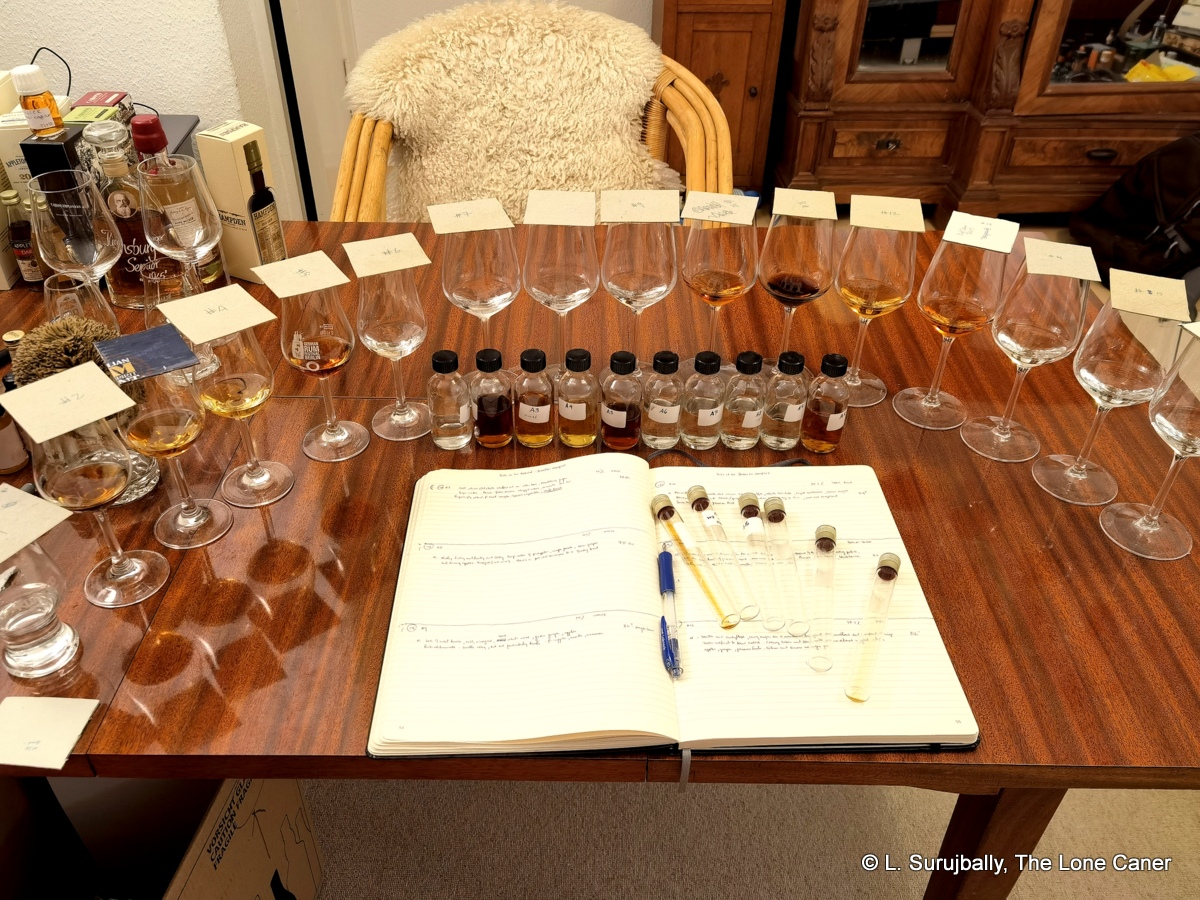 Second to last glass on the right…..

After this experience, I hauled the Rhum Mia from the previous year out of the sample box in the basement and tried it again. The notes were pretty much on point and my memory had not failed: that one was intriguing but not really exceptional and scored on the median, and because it was an early variation, it held the promise of improvement as time passed and experience was gained. Alas, the 2019 edition is more of a disappointment. It wasn’t as if it lacked interest, was bereft of originality and even some punch: not at all, it had what it had and was a touch more distinct than its predecessor…it was just not as pleasant to drink. Somehow the herbal grassiness and tart fruit part of the profile had been dialled down while allowing less interesting notes to make up the difference. That, I’m afraid, was not to the rhum’s benefit…or to mine.

Saigon Liquorists — the name of the small company behind the Mia brand — is the formally incorporated enterprise of two expatriate Frenchmen Clément Jarlier and Clément Daigre, who saw the cane juice liquor being sold on the streets in Ho Chi Minh City and smelled a business opportunity. The fact that one was involved in spirits distribution in Vietnam while the other had both broker experience and knew about the distillation of cognac helped establish things, cince they already had some background in the industry.

Sourcing a 200-liter single column still in 2017 from China, they obtained fresh cane, then the juice, experimented for three months with fermentation, distillation, cutting, finally got the profile they were after, and rolled out the first Rhum Mia in October that year at a charity gala. In their current system, the sugarcane comes from Tien Giang in the Mekong Delta, just south of Ho Chi Minh City. The sugarcane is peeled (and that peel is discarded), and pressed once to get the first juice. That is then vacuum-packed in 5L bags and loaded into refrigerated trucks (this slows down fermentation), which transport the bags the 70km to the distillery.

There fermentation is begun and lasts about five days, before being run through the small column still – somewhat more heads than usual are cut, which reduces the flavour (but also the hangover, apparently), and what comes out the other end is around 77% ABV. The rum is rested in inert, locally-made traditional clay vessels (chums, used in rice liquor fermentation in Vietnam) for eight months and then slowly diluted with water over the final two months to 45% – a strength chosen to appeal to the local market where Mia’s initial sales were made.