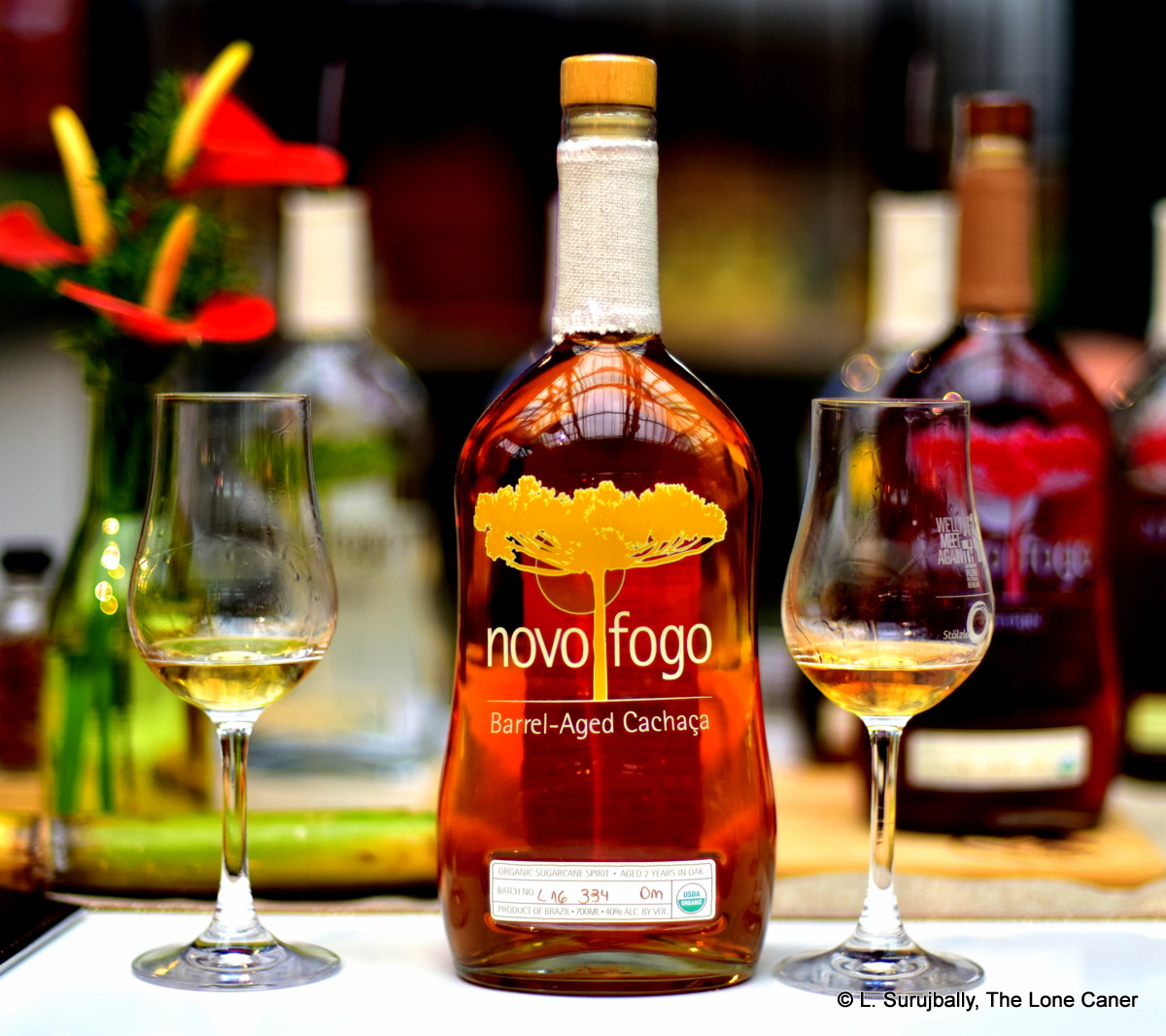 Last time around we discussed a Brazilian cachaça from the environmentally astute company Novo Fogo which they called “Chameleon” — it was aged about a year and meant to quietly blend in to the various mixes for which it was destined (hence the name). I felt it succeeded reasonably well on its own grounds, and the next step up the food chain, the “Barrel Aged” version that is the subject of today’s review, also follows in that tradition — though in my opinion, less successfully.

The details are pretty much the same with respect to the company (I’ve added it below the review to save needless repetition). Novo Fogo is based in the southern state of Paraná in Brazil, has a strong organic and environmental ethos, and makes a trio of cachaças ranging from the “Silver” to this young barrel aged iteration: the three are the more accessible, more familiar portion of their range because they are aged — when they are aged at all — in American ex-bourbon barrels: these are sourced from the Haven Hill distillery in this instance, taken apart, sanded and charred. 1 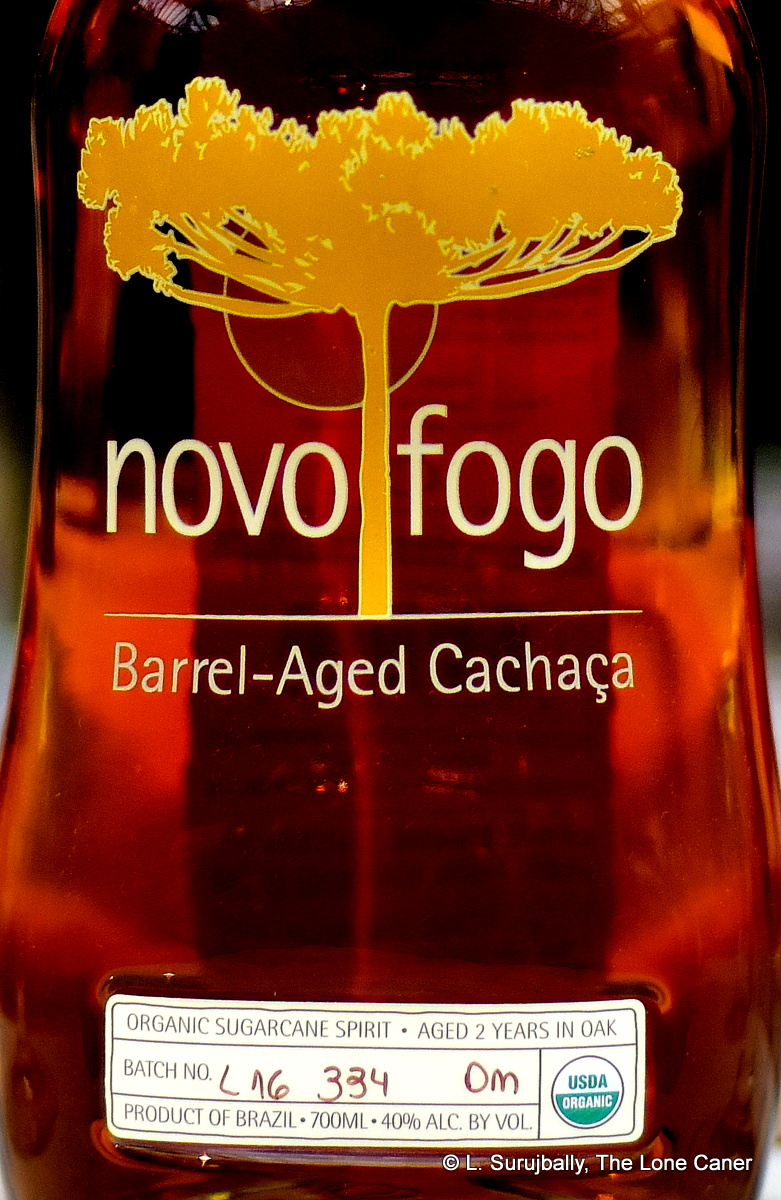 That combo of charring the American ex-bourbon barrels and longer ageing within them, has resulted in the most rum-like cachaça I’ve ever tried. None of the slightly bitter, off-kilter amburana aromas here, no sharp juddering teak notes. Instead, initial scents of vanilla, minerals and cold campfire ashes combine uneasily with more “traditional” caramel, brown sugar, and soft fruits. One can sense the brininess, olives and more pungent hints of a pot still distillate that processed a cane juice wash, but dialled way down and wafting away before one can properly come to grips with it. It’s 40% ABV and that’s part of it, of course, because the 43% Chameleon showed more character, even though it was younger.

The palate is better: it’s tasty on its own terms, and interesting, but ultimately a weak tea that once again fails to provide anything we have not already had from various lightly aged añejos, ambres or gold rums. Biscuits, cereal, whipped cream, plus sugar water and a few spices. A soft hint of peaches, maybe cherries. The few rummy flavours the nose had promised have headed for the hills like the Road Runner, leaving nothing behind but a thin dissipating dust cloud which promises all sorts of nice goodies – black tea, fruit loops cereal, a flash of orange peel, spices and herbs – and leaves your palate twitching…but there’s no follow-through and they dissipate quickly. The finish is pretty much more of the same: short, clean, light, mostly sugar cane sap and frassy, herbal notes. Nothing specific, nothing to remember, nothing that stands out, and all gone too quick.

Aged cachaças are somewhat less popular and perhaps less well known. This is hardly surprising, since the purpose of a serious cachaça is to boost a caipirinha, and the wilder the profile of the cachaça, the better the caipirinha is supposed to be. That sort of crazy comes best from unaged spirits, as evidenced by the strong blancs making better ti’ punches in the French islands.

None of that off-the-reservation individuality is in evidence here. The barrel-aged cachaca Novo Fogo made seems almost shy, as if embarrassed to display anything so vulgar as an actual character. It is touted as a step up from its cousin (possibly based on the fallacy that more age = better rum), but smells muted and muffled, with most of the interesting stuff bleached out…and then whatever remains has agreed to a non aggression pact. While rum-like enough to appeal to someone looking into the standard-strength Brazilian spirits market to see what the fuss is all about, I feel it lacks the decent low-level complexity which marked the Chameleon. In this case, the cheaper product gets my money. 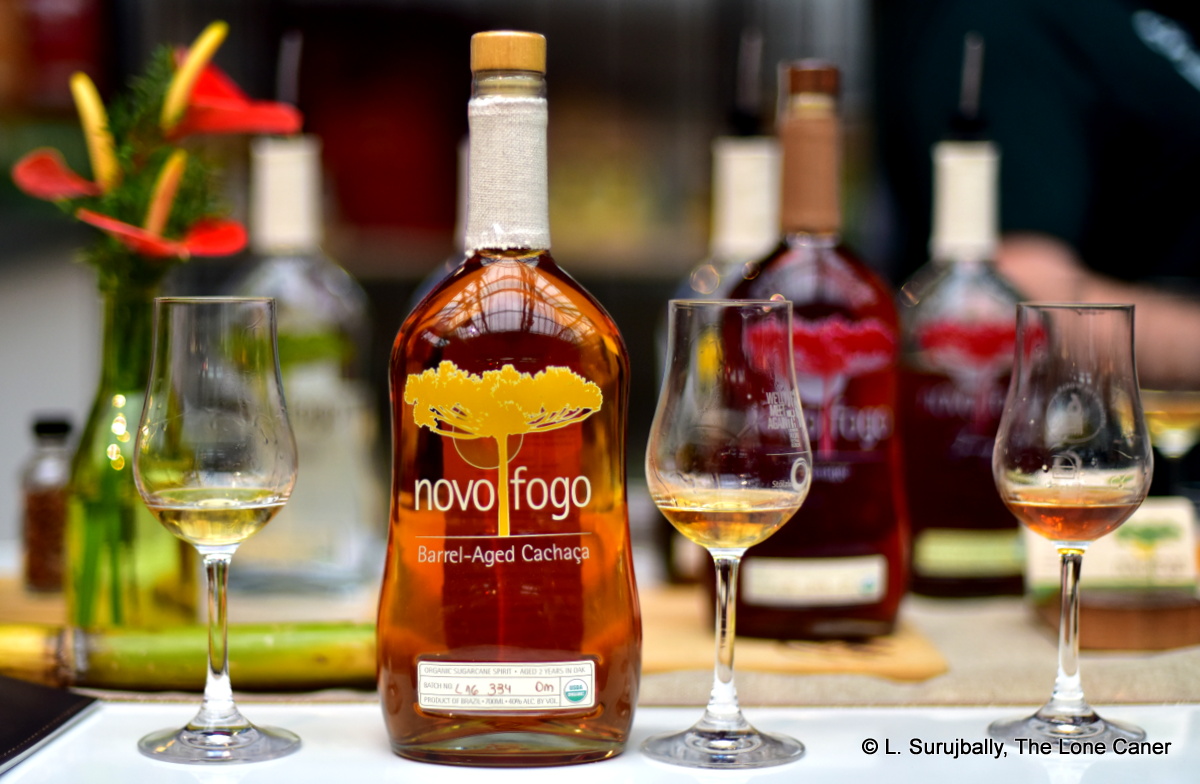