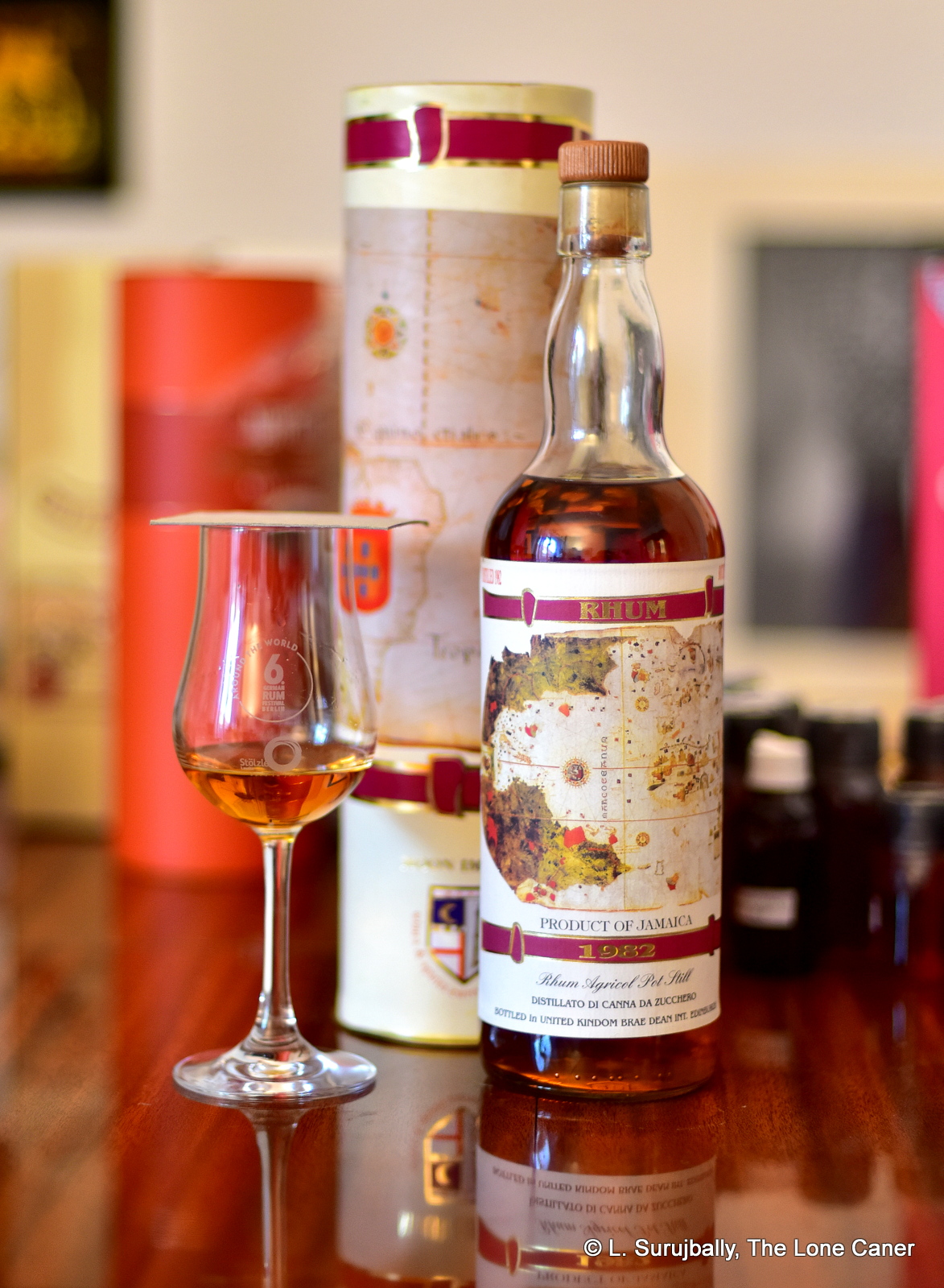 It’s unclear to me what Moon Import thought it was doing back in 2004 when they blended this rum. They had done blends before, something of a departure from other Italian independents who since the 1970s had thought to bootstrap their expertise with single cask whisky selections into commensurate skill with single cask rums … but few except maybe Rum Nation (which was formed nearly two decades after Moon Import) took blends seriously.

Even when released as such, for the most part rums made that way tended to be multiple barrels of a single distillery, usually a particular year and age, so that more bottles of something exceptional could be wrung out. Moon, while certainly adhering to that philosophy when it suited them, also played around with blends more than most, particularly with Jamaican rums and here they mixed up stock from four different distilleries: Innswood, Long Pond, New Yarmouth and Monymusk, from what were undoubtedly barrels aged in Scotland. One wonders how come Hampden and Worthy Park were not considered for inclusion…perhaps they were too aggressive and didn’t play nice.

For originality at least, kudos to Moon – at that time the various operating distilleries in Jamaica were not very well known, so to take these four and combine them took some courage — to mention them individually at all was unheard of. Too bad they ballsed it up on the labelling – they spelled the name wrong on one of them, then added insult to injury by calling it a “Rhum Agricole”, just as they did with the Demerara 1974 released the same year.  They mentioned which bottle in the series it was…but not the total outturn. Moreover, they noted year of production (1982)  and year of bottling (2004)…then said there was a 25 year old hiding in one of them. Clearly quality control and fact checking were unfunded areas of endeavour in the labelling department back in the day. 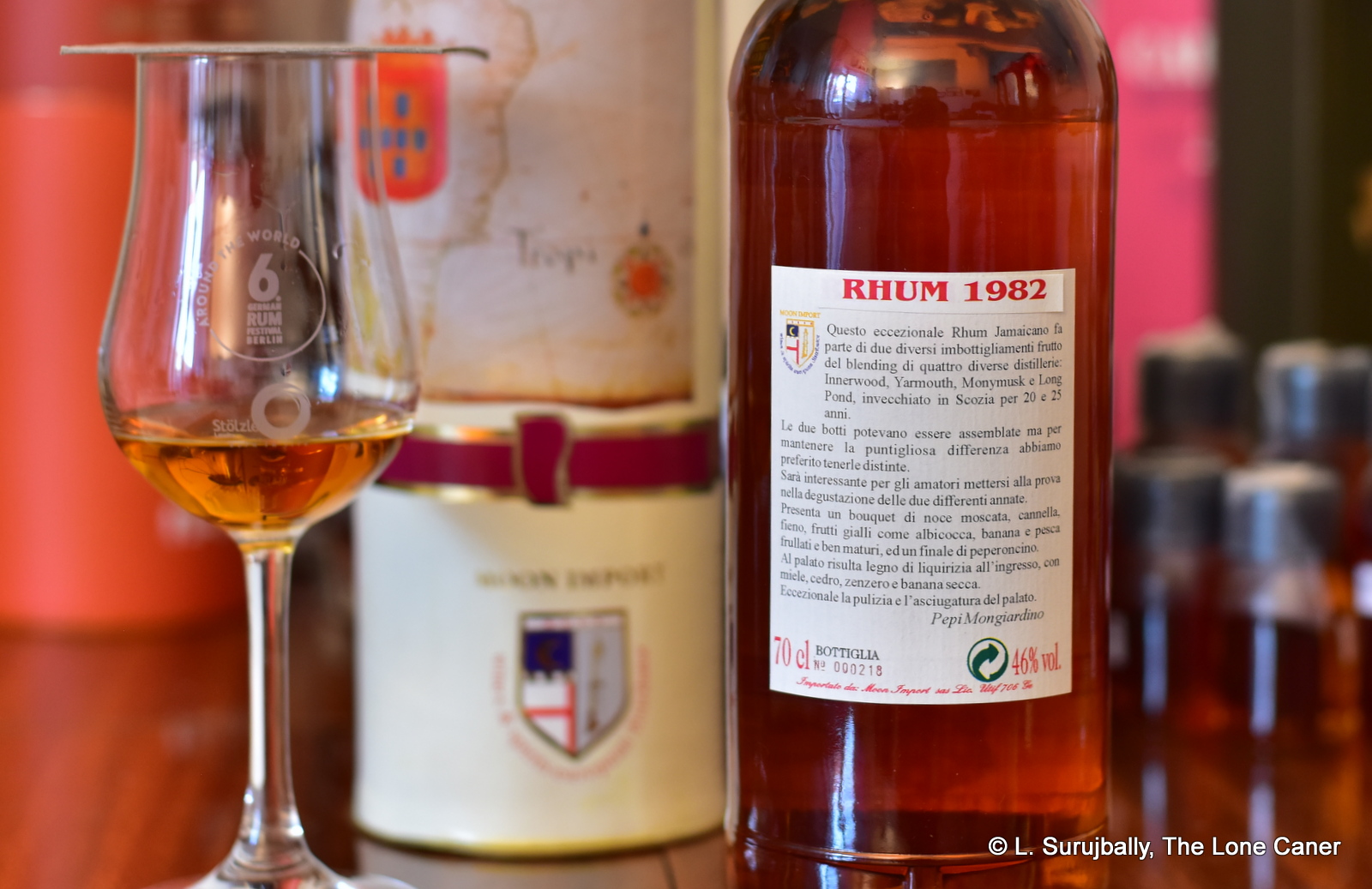 But that aside, the rum had its points that its shoddy labelling could not entirely hide. Bottled at the 46% commonly used by small independents at that time, it smelled of wax and sugar water plus a bit of unsweetened yoghurt, and stoned fleshy fruits like cherries and peaches just starting to go off a little.  It presented like “Jamaica lite”, a sort of gently funked-up rum which today would be thought of as “meh” but back then was probably considered scandalous. I liked it, not least because that nose really took its time coming out and even a quarter hour later I was writing down things like “old paper”, “sweet and dry” and noted how the light clarity of green apples and citrus combined nicely with the softer aromas. 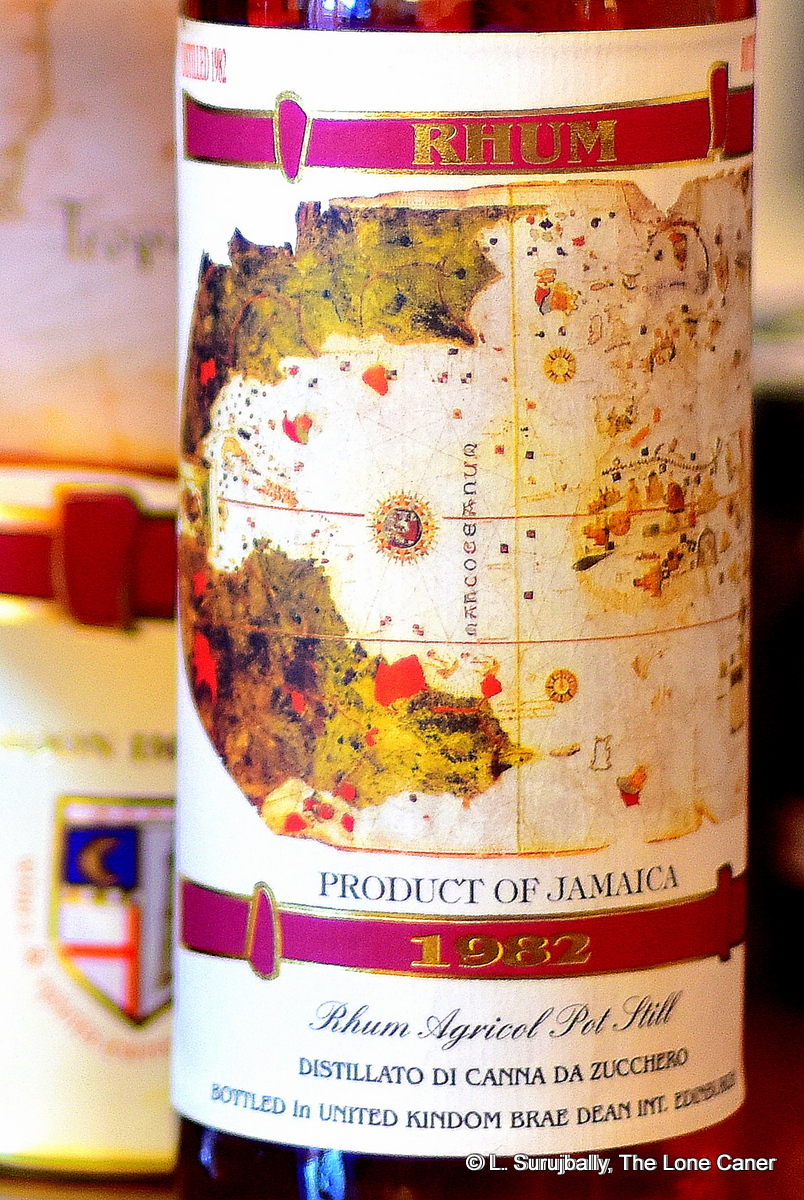 Tastewise, I would have to say it was somewhat indeterminate: it was hardly Jamaican at all by this point. Oh the flavours were there: the questions is, what were they? The rum was dry, almost astringent, and presented tastes of faint, dry smoky spices like masala, paprika and tumeric. There was some fruity ruminess – raisins, figs, dates, caramel, vanilla, and cinnamon, and yes, there were fruits hiding behind those, but it was curiously difficult to come to grips with them because they kept ducking and bobbing and weaving. Still: fruits, florals, black tea, spices, and a nice cleanliness ot the experience.  It all wrapped up in a finish that carved its way down with firm clarity, leaving behind memories of vanilla, nuts, light caramel, raisins, aromatic tobacco and peaches.

So what to say about the rum? Well, it was a good drink and a tasty dram. It was nice and complex, good nose, excellent palate, worked well as a sipping rum — after twenty plus years of ageing the rough edges had been gently sanded down to smoothness. I liked it, and I think you would too, in spite of its mild I’m-not-sure-I’m-a-Jamaican character.

The combination worked, and the four distilleries made for an interesting blend. I’m just left with a nagging sense of incompleteness, as if there was more in there we were missing. Bottling each distillery’s rum as a quartet might have done more to highlight their qualities than mixing them all together and forcing them to give up their individuality in the soft merging of variant profiles.  It is to Pepi Mongiardino’s credit that he made a rum that skated past such concerns and came out the other end as a product worth getting. And so, while it does Jamaica no dishonour at all, I think you’ll also find that it inflames rather more desires than it quenches.