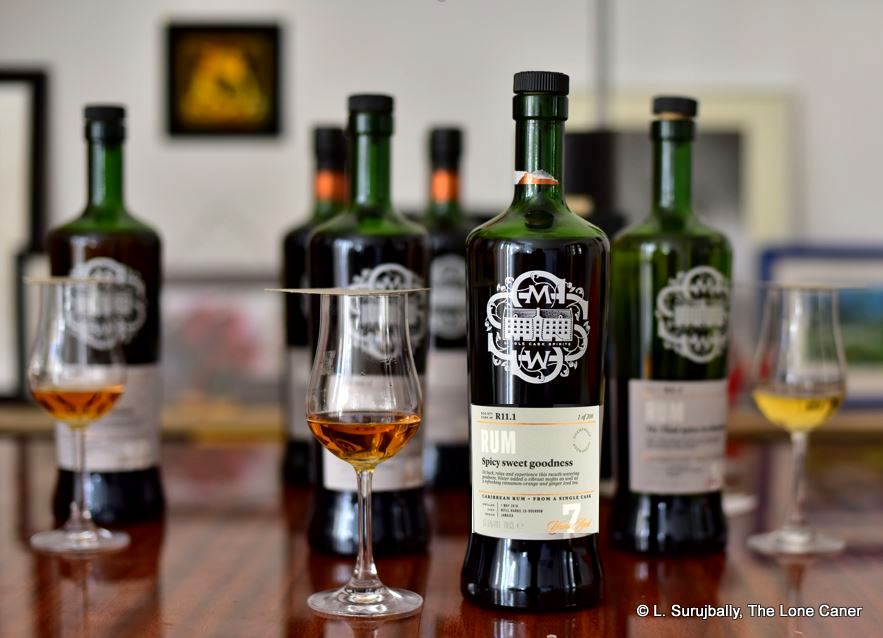 The Scotch Malt Whisky Society is no longer, as outlined in the brief biography of the organization, quite any of those things, not really. It has offices way beyond Scotland, it’s not restricting itself to bottling malts, has moved past releasing only whiskies, and can just barely be considered a society (more of an independent bottler). This is especially so since they have begun to not just buy aged casks from whisky producers but also new-make spirit so they can age their own.

This last development has not yet occurred in the fields of their rums, though it wouldn’t really influence my purchasing decisions – I’ve been a fan for years, ever since I was fortunate enough to snap up three of their rums in Canada in 2013. That’s around the time when they started to take rums even marginally more seriously than before, and now in 2020, they have 13 different distilleries’ rums, of which the R 11.1 represents one of the New Jamaicans many fans are currently salivating over.

The Society is no stranger to Jamaica – the very first release R1.1 was a Monymusk, and thereafter they added R5 (Longpond, from 2012), R7 (Hampden, from 2016) and in 2017, they scored with Worthy Park as R11. And since I’ve unconscionably ignored the ‘Park for quite some time, I think I’ll begin the slow accretion of SMWS rum reviews with them – also because they’re pretty damned good. This one is a relatively young 7 years old, bottled in 2017 at a firm 57.5% (308-bottle outturn) and has the evocative title of “Spicy Sweet Goodness”, which is very much in line with the Society’s equally amusing and puzzling label descriptions that many have drunk themselves in to stupors trying to understand or follow.

Nose first. Yep, it’s definitely a Worthy Park and a pot still rum, such as I remember with such fondness from the Compagnie des Indes’s two 2007 WP editions, the 7YO and the 8YO, both of which were really good. It’s sweet and crisp and snaps across the nose with a light and sharp esteriness: my first written notes are “fruits, flowers and honey on white bread, wow!” But there’s also a light glue background, some cereals, ginger, cumin, lemon peel and pineapple all coming together in a very precise amalgam where each note is completely distinct. It has the freshness of a newly sun-dried white sheet with the sunshine still aromatic upon it.

This is one of those rums where the taste is even better than the nose. What it does is settle down a bit, and if it loses something of the initial clean clarity that nose displayed, well, it gains a bit in depth and overall complexity. The white bread has now been toasted, the cereal is almost like Fruit Loops, but the honey (thankfully) remains, golden and tawny and thick. These core notes are joined by brown sugar, toblerone, almonds, fleshy fruits like papaya, peaches, apricots and ears, as well as a peculiar background of beef bouillon, maggi cubes and crackers and (if you can believe it) powdered laundry detergent, y’know, like Tide or something. The light citrus (it really does remind me of Fanta at times) is there to balance everything off, acting as something of an exclamation point to the palate. The medium-lasting finish is surprisingly simple in comparison to the smorgasbord we just waded through, but it is elegant and has the main food groups well represented – fruity, sweet, salty and tart, all at the same time.

Well, this was quite something. I liked it a lot. I have no idea how so much was stuffed into the ex-bourbon barrel the rum was aged in, especially given such a young age and what was (I believe) a continental ageing regimen. There are discordant bits here and there (minor ones) in the way the flavours don’t always harmonize completely; and sure, you can taste the youth in its brash liveliness and the initial sharply crisp attack – yet I’m not convinced that a few more years would have done much more than enhance it marginally.

Most of the rums I’ve tried from WP are relatively young, and relatively good — it seems to be a real peculiarity of the estate to produce rums that other companies ageing their rums for twice as long would have been proud to bottle. In fine, the SMWS R11.1 is a jaunty young rumlet, made with verve and style by an outfit which seems somehow to regularly put out single-digit aged rums – for themselves and for others – which are consistently and uniformly better than conventional wisdom says they should be. To do that is to Worthy Park’s credit. To recognize it and bring it to us, is that of the SMWS.