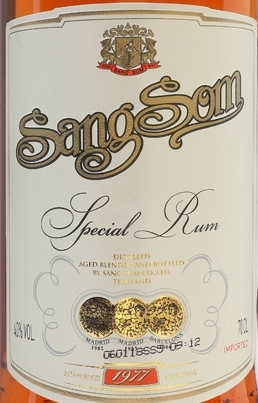 Like most rums of this kind, the opinions and comments are all over the map. Some are savagely disparaging, other more tolerant and some are almost nostalgic, conflating the rum with all the positive experiences they had in Thailand, where the rum is made. Few have had it in the west, and those that did weren’t writing much outside travel blogs and review aggregating sites.

One of these is the Thai Sang Som Special Rum, which has been around since 1977 and has supposedly garnered a 70% market share for itself in Thailand. This is a rum made from molasses, and apparently aged for five years in charred oak barrels before being bottled at 40% ABV. Back in the 1980s it won a clutch of medals (Spain, 1982 and 1983) and again in 2006, which is prominently featured in their promo literature…yet it’s almost unknown outside Thailand, since it exports minimal quantities (< 1% of production, I’ve read). It is made by the Sang Som company, itself a member of Thai Beverage, one of the largest spirits companies in the world (market cap ~US$15 billion) – and that company has around 18 distilleries in the region, which make most of the rum consumed in and exported by Thailand: SangSom, Mangkorn Thong, Blend 285, Hong Thong, and also the Mekhong, which I tried so many years ago on a whim.

The rum doesn’t specify, but I’m going out on a limb and saying, that this is a column still product. I can’t say it did much for me, on any level – the nose is very thin, quite sweet, with hints of sugar cane sap, herbs, dill, rosemary, basil, chopped up and mixed into whipped cream. Some cinnamon, rose water, vanilla, white chocolate and more cream. Depending on your viewpoint this is either extremely subtle or extremely wussy and in either case the predominance of sweet herbal notes is a cause for concern, since it isn’t natural to rum.

No redemption is to be found when tasted, alas, though to be honest I was not really expecting much here. It’s very weak, very quiet, and at best I can suggest the word “delicate”. Some bright ripe fruits like ripe mangoes, red guavas, seed-outside cashew nuts. Coconuts, flowers, maybe incense. Also lighter notes of sugar water, watermelon, cucumbers, cinnamon, nutmeg – Grandma Caner said “gooseberries”, but I dispute that, the tartness was too laid back for that rather assertively mouth-puckering fruit. And the finish is so light as to be to all intents and purposes, indiscernible. No heat, no bite, no final bonk to the taste buds or the nose. Some fruit, a little soya, a bit of cream, but all in all, there’s not much going on here.

All due respect for the tourists and Asians who have no issues with a light rum and prefer their hooch to be devoid of character, this is not my cup of tea – my research showed to to be a spiced rum, which explains a lot (I didn’t know that when I was trying it). It’s light and it’s easy and it’s delicate, and it requires exactly zero effort to drink, which is maybe why it sells so well – one is immediately ready to take another shot, real quick, just to see if the next sip can tease out all those notes that are hinted at but never quite come to the fore. The best thing you can say about the matter is that at least it doesn’t seem to be loaded to the rafters with sugar, which, however, is nowhere near enough for me to recommend it to serious rumhounds who’re looking for the next new and original thing.