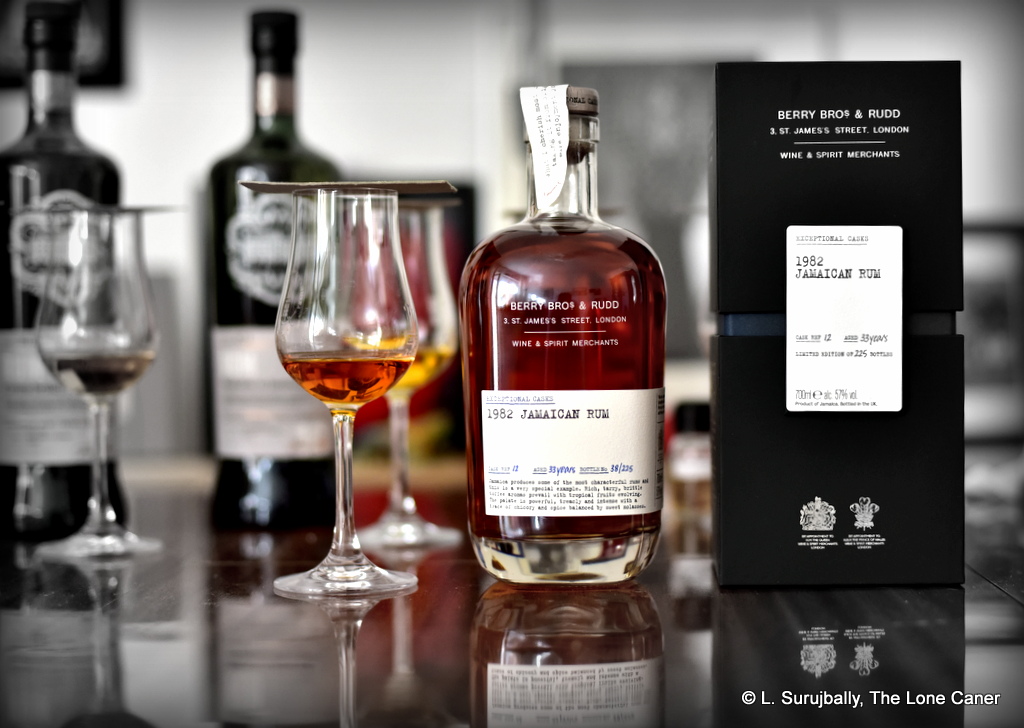 The stats and the label speak to a rum that can almost be seen as extraordinary, which usually fills me with dread as a reviewer: for, how could any rum live up to that? I mean – from Jamaica in the 1980s, 33 years old, a cousin to another really good rum from there, bottled by an old and proud indie house…that’s pretty impressive, right? Yet somehow, against my fears, Berry Bros. & Rudd have indeed released something special. The initial tasting notes could come from any one of a dozen rums, but as it develops and moves along, it gains force, and we see a great original product coming into focus, something we have perhaps tried before…just not often done this well.

BBR, you will recall, issued the 1977 36 Year Old Jamaica rum which was one of my more expensive purchases many moons back, and it was a great dram. Fast forward a few more years and when this 1982 33 year old “Exceptional Casks” old rum – also from an unnamed distillery – came on the market, I hesitated, hauled out my cringing wallet and then took the plunge. Because I believe that the days of easily and affordably sourcing rums more than twenty years old (let alone more than thirty) are pretty much over, and therefore if one wants to own and try rums that are almost hoary with age, one has to snap ‘em up when one can….as long as the purse holds out. 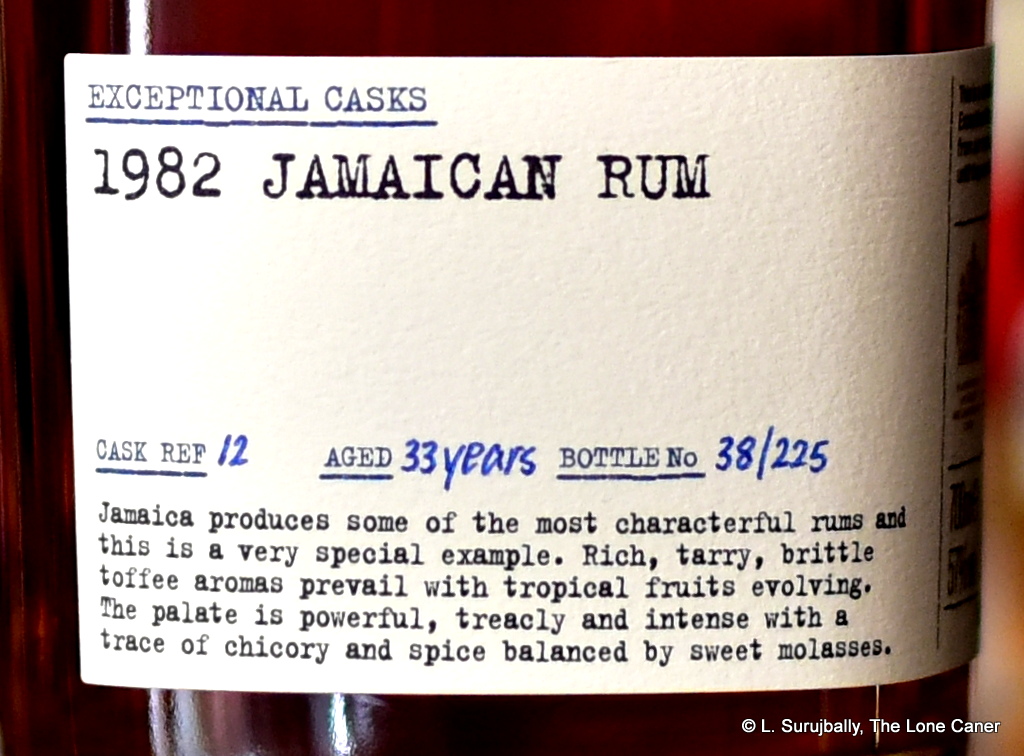 So, what do we have here? A dark amber rum, 57% ABV, one of 225 issued bottles, in a handsome enclosure that tells you much less than you might wish. Pouring it into a glass, it billows out and presents aromas of dark fruits, well polished leather, pencil shavings, prunes, pineapples, and a whiff of fresh, damp sawdust. This is followed by a delectable melange of honey, nougat, chocolate, molasses, dates, figs and light red olives, and as if that wasn’t enough, it burped, and coughed up some very ripe apples, raisins and the musky tartness of sour cream….an hour later. Really complex and very very aromatic.

The real party starts upon tasting it. It’s smoothly and darkly hot, begins quite sharply, revving its engine like a boss, then apologizes and backs off from that dry and heated beginning (so sip with care at the inception). You can taste leather, aromatic pipe tobacco (like a port-infused cigarillo), combined with softer hints of brine, olives, and dark unripe fruits. Not so much funk or rancid hogo here, quite tamed in fact, which makes it a phenomenal sipping drink, but in that very subdued nature of it, it somehow feels slightly less than those feral Jamaicans we’ve started to become used to. It’s got really good depth, lots of flavour and to mix a rum this old and this good is probably an excommunicable sin someplace.

Lastly, the finish does not let down, though it is somewhat subdued compared to everything it showed off before – it was initially hot and then calmed down and faded away, leaving behind the memory of pineapples, ripe cherries, brine, sweet olives, raisins, with a last touch of molasses and caramel lurking in the background like a lower case exclamation point.

To my mind, it is very likely from the same stock as the other 1977s that exist (the other BBR and for sure Juuls’s Ping 1977) because much of the profile is the same (and I know that because I went downstairs and fetched them out of mothballs just to cross-check). Facts say the Ping is from Long Pond and scuttlebutt says the BBR is as well, which may be true since the hard-edged profiles of the high-ester Hampden and Worthy Park rums don’t quite fit what I was sampling (however, the question remains open, and BBR aren’t saying anything, so take my opinion here with a grain of salt).

Both rums were aged in Europe and while I know and respect that there’s a gathering movement about favouring tropical ageing over continental, I can only remark that when a rum aged in Europe comes out the other end 33 years later tasting this good, how can one say the process is somehow less? It stands right next to its own older sibling, bursting with full flavours, backing off not one inch, leaving everything it’s got on the table. What a lovely rum.