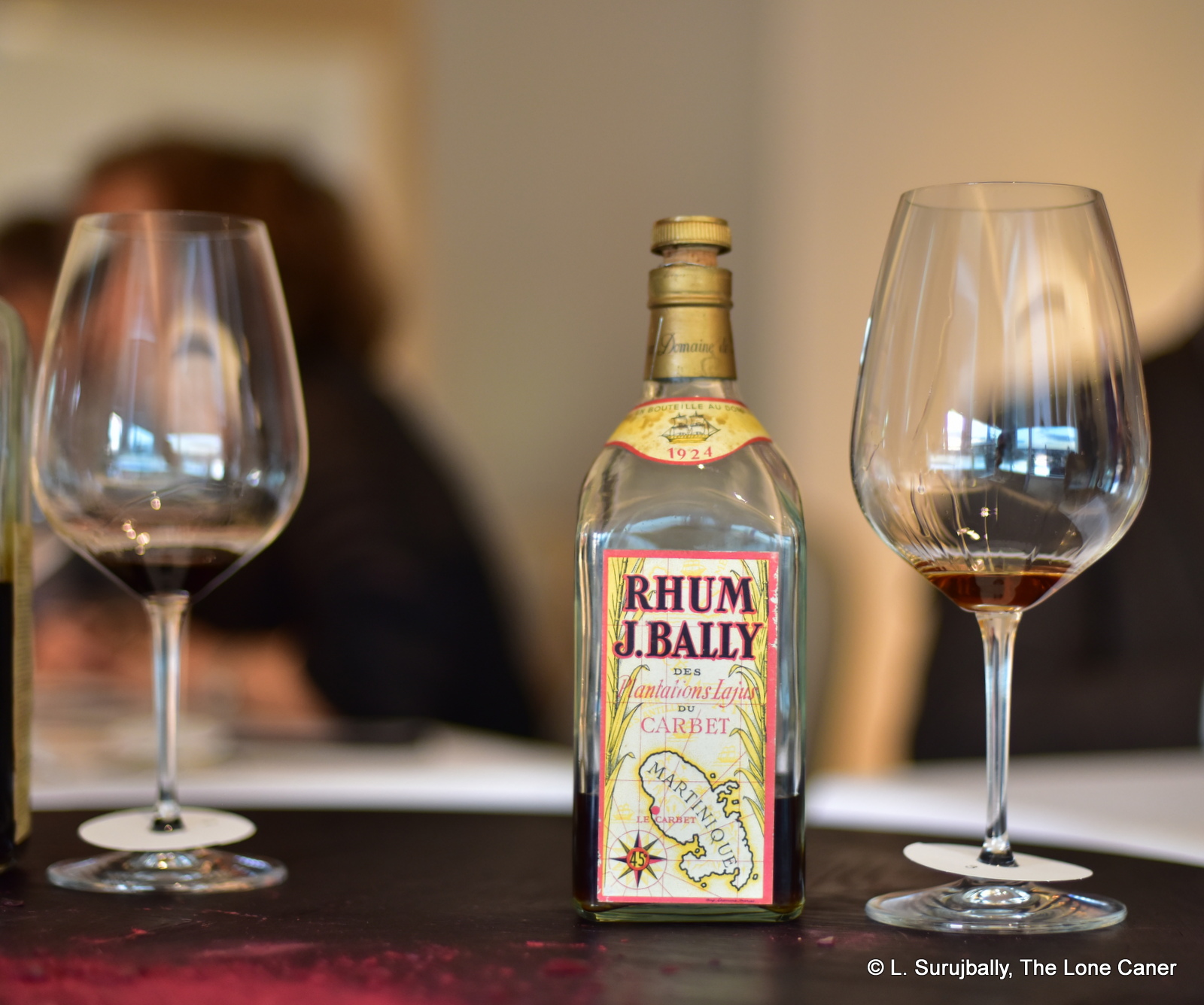 Few are unaware of the existence of the J. Bally 1929 – for those who troll the online shops it remains one of the few very old bottlings from inter-war Gilded Age times to remain available…if one has over two grand kicking about to buy it.The Bally 1924, on the other hand, is a whole lot rarer – I can’t remember the last time I saw one coming up for discussion, let alone sale. And one could argue that its heritage is much more gold-plated – it’s the first vintage from J. Bally. I’ve tried quite a few from this bottler, one dating back to the 1960s, but to try the very first? That might be worth a kidney right there.

This bottle being such a piece of heritage, a little history is in order. J. Bally was named after Jacques Bally, a graduate of a top engineering school in Paris, the Ecole Centrale des Arts et Manufactures (ECP, founded in 1829) – he snapped up the Lajus Plantation on Martinique in 1917, a mere fifteen years after Mount Pelee erupted, when memories of that disaster were still fresh and land prices were cheap (Lajus, founded in 1670, was already in foreclosure, having gone bankrupt after the 1902 disaster). By 1920 he had installed new steam engine, fixed up the salvageable equipment he could and (legend has it) pretty much built his own column still from scratch. In that same year the nearby Habitation Dariste owned by the the Gronier family went bankrupt and Bally bought it in 1923 and moved the distillery equipment to Lajus to augment his own machniery. In 1930, by which time he was already laying away rum stocks to age, he also had a hand in designing the signature pyramidical and square bottles which became so associated with Bally in later years. The rhums Bally made were very popular, sold well, and the company remained in business until the 1980s when Remy Cointreau acquired it, at which point production was shut down at Lajus and moved to Domaine du Simon where (as far as I know), it’s still being made, with cane from Lajus. Note that in 2003 La Martiniquaise bought out Saint James and Bally (to add to their rum portfolio which already contained the brands of Depaz, Dillon, Negrita and Old Nick) which is why the Remy Cointreau’s webpage makes no mention of either one now.

Aside from being made so long ago, what makes the 1924 special is that it was the initial release of an aged rhum from Bally, and one of the first of its kind in the French West Indies, if not the first. Jacques Bally took inspiration from cognac and eau-de-vie makers in France and was apparently the first to consider ageing Martinique rhums in oak. This provided the initial release of his rums in the 1920s with a depth of quality that made them extremely popular and well-known, and one can just imagine all the other distilleries on the island rushing to copy the idea. The inevitable question arises, how old is the 1924 vintage? “More than six years,” said Luca in a text to me, and that makes sense if the bottle that houses it was only designed and made in 1930. We can leave it there with only one other great unknown, and that’s how many bottles were released – and nobody knows that any longer, sorry. I hit a brick wall on that one.

Enough of the pedantic stuff. How was it to taste, eliminating all the baggage of history and heritage and rarity the rhum came with? It’s one thing to sing high praises because it’s from so far back, but a cold review is somewhat more challenging, especially considering the august company in which I tried it – the Tasting of the Century in September 2018. You can bet that I was paying real close attention and took a long time with my glass on this one, if only so I wouldn’t be embarrassed when real writers came out with their own notes.

Nose first: nice! For all its age, the Bally 1924 could have come off the line last year and you’d never know it. It smelled of fresh squeezed apple juice, pears with oodles of sweet light aromas, flowers, sugar water and watermelon, out of which emerged a nice melange of crushed walnuts, fanta, lemon zest, crisp yellow mangoes and cumin. If you were tasting it blind you’d swear this was an agricole you could pick up online for some reasonable coin – like the Harewood 1780, it presented a profile not a hundred miles removed from something produced today.

Bottled at 45% ABV, the Bally 1924, for all the noble pedigree granted by being made so far back, in many ways resembled Bally rhums from past decades’ that I went through three years ago. It was slightly sharp on the palate, and as clean and clear as any of its descendants. Apples, cider, brine and olives came smoothly off the assembly line, bolted on to emergent flavours of pears in syrup, green grapes, spices, more lemon zest, leather, a touch of vanilla and nougat and a vague hint of grass, black tea, earthy musk, and rosemary. The overall balance, cleanliness of the mouthfeel was excellent, and the ageing had definitely sanded down any rough edges – it was quite simply a pleasant drink to have, fading easily into a smooth finish that provided little that was new, just a languorous recap of the highlights – peaches, pears, mangoes, lemon zest, watermelon and sweet flowers and herbs and a pinch of cumin. A neat and near-perfect little agricole, coming together beautifully.

Well. How to score something like this? Well, I’m going to give it a solid endorsement — not that this means anything given its mythical near-unicorn status. But I should note in passing that for all its quality, the Bally 1924 strikes me more as an essay in the craft of agricole than a completely finished product that stands the test of time. It shows what they were before the snapped into focus in the last few decades of the AOC regs.

Perhaps it’s unfair to rate a rhum made nearly a hundred years ago to the standard of today when so much has changed in the interim — and for sure others around the table that day loved it (Matt rated it as his personal favourite for the evening). To round things up: the Harewood 1780 presented a startlingly modern profile that went in its own brilliant direction way, strong, forceful, distinct; the Skeldon 1978 couldn’t rise above its elder brother but was still quite an amazing drink; and the Saint James 1885 was a rum made in a style quite different from agricoles as a whole, unique and interesting. The Bally is caught in a limbo between the modern versions of the spirit, and the old ways of the 1885 – that’s in no way a failure, just that the competition is more fierce because we’ve had so many rums that are so similar to it.

But you know, whatever the score, there’s a certain cachet, even honour, in having been able to try a quartet of such grail-quest rums, so old, so rare, so absolutely stinking of rum history, so generously shared. The Tasting of the Century might one day be exceeded (though I can’t for the life of me imagine what rums would comprise version 2.0); but whether that happens or not, I’ll always be happy to have tried the Bally — because it was one of those rhums that pointed the way to the modern era of cane juice rhums, so exactingly made, so proudly issued, so excellent to drink. The Saint James 1885 might be the doddering grandaddy of the French island rhum style, but the 1924 with its crisp and clear profile taking us back to the beginning of the modern era, is surely its godfather.