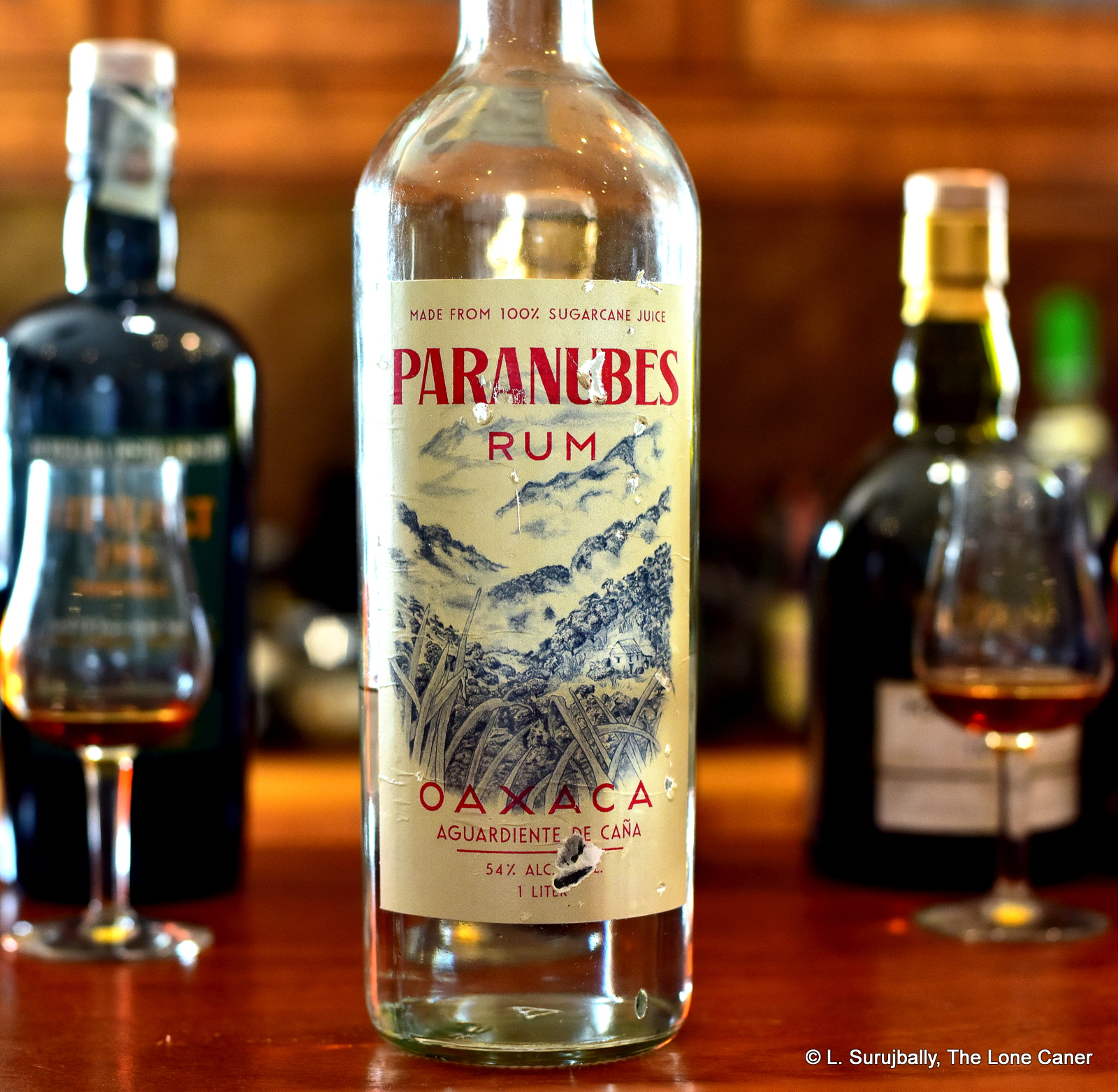 Almost without warning and with little fanfare, Oaxaca went from being a small geographical region in Mexico to the source of a fast moving blip in the rumiverse, the Paranubes white rum. Although there have been occasional comments on the various Facebook rumclubs on the Oaxaca-region blancos before this, my feeling is that the June 2017 Imbibe Magazine article on Paranubes, followed up by the April 2018 Punch article “Hunting for Rum in Oaxaca’s Cloud Forest” was in a large measure responsible for the upsurge of interest in the region, this particular company, and this rum. That, and the fact that like Rivers Royale, Haitian clairins or Cape Verde grogues, they represent a miniscule, almost vanished proponent of natural rum making, of a kind we don’t see much of nowadays…which is exciting much interest in the rum soaked hearts of the ur-geeks who are always on the lookout for something new, something potent and something pure.

Mostly unknown in the wider world, Mexican white rums like the Paranubes share DNA with agricoles and cachacas – the source of the spirit is fresh-pressed sugar cane juice – but in manufacture and distribution, if the terms could be used for something so relatively grass-roots, they are closer to the Haitian clairins. Locally made by unregistered, numberless small mom-and-pop roadside hoocheries and tiny distilleries (called trapiches), using local materials and old equipment, a different one around every corner and in every region, they are called aguardiente de caña there and are back country white lightning which (again like clairins) is consumed mainly in the neighborhood. There are several other small trapiches in the neighborhood: the story goes that the co-founder of Mezcal Vago, Mr. Judah Kuper was running around Oaxaca with a load of mezcal (and tasting roadside aguardientes as a sort of personal hobby) when he happened to try that of a local distiller and businessman called Jose Luis Carrera, was not just impressed but blown away, and approached him with the idea of exporting it. This has led to the Paranubes brand being formed. 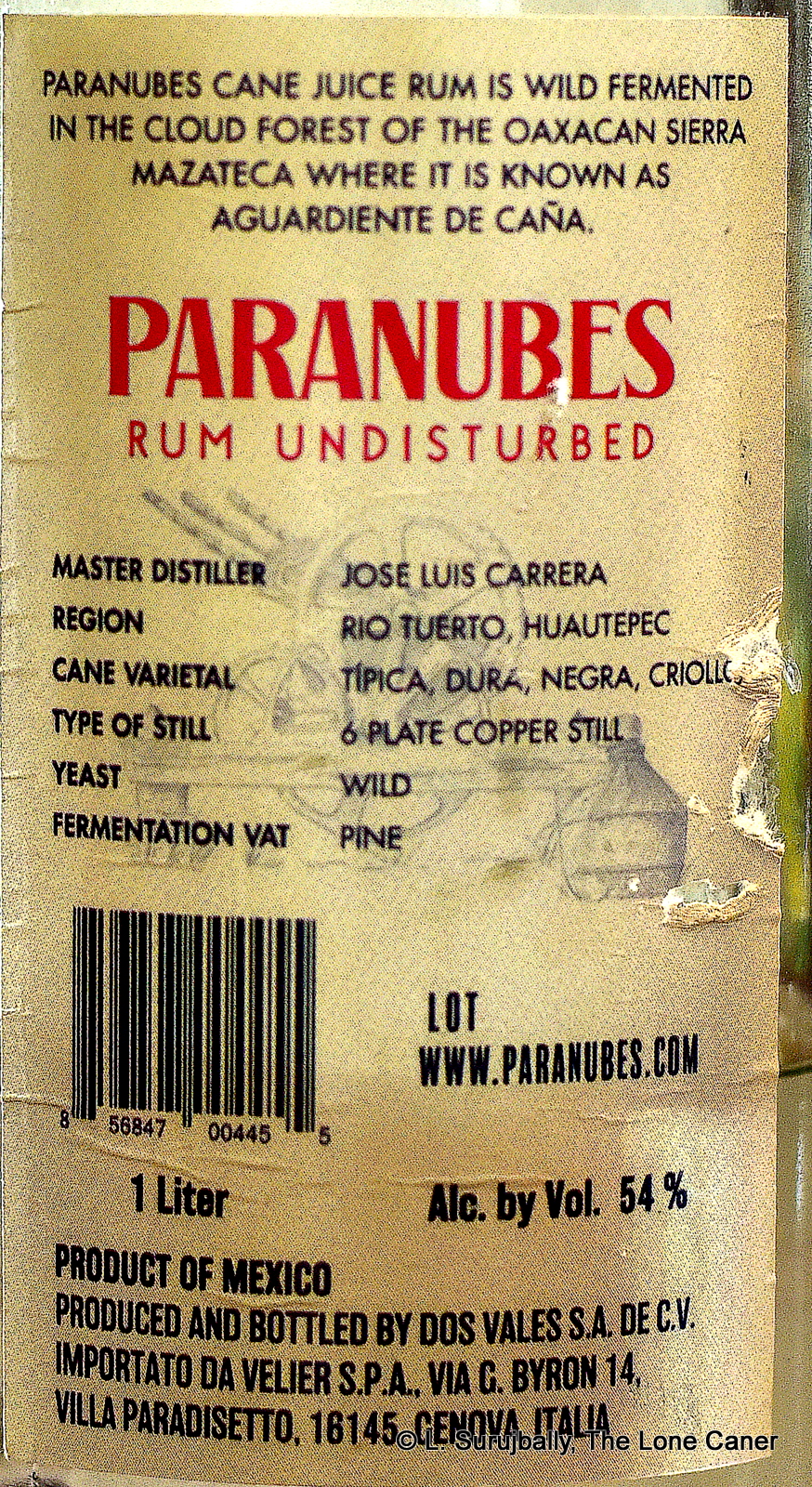 Mr. Carrera’s little distillery has been in existence for decades, using different varietals of sugar cane free of pesticides and fertilizers, lugging the cane to the trapiche by donkey power and after crushing, fermenting the juice with wild (naturally occurring, not added) yeast and a sort of boiled mesquite bark mix in a couple of 1100 liter pinewood vats (but occasionally a pineapple or two is used in the same fashion of bark is not available – these guys take the meaning of “batch production” seriously). Every day Mr. Carrera takes half of one of the vats and chucks it into the small copper column still (which holds 550 liters) – and then refills the vats in the afternoon. What this means is the vats are a mix of very old and very young fermenting liquids, and since they are only completely emptied three times a year, they end up producing an enormously flavoured spirit that conforms to few markers of the rums with which we are more familiar.

That part is key, because I said that in origin it’s like an agricole, in manufacture like a clairin, but let me tell you – in taste, it’s like those were spliced to an out of left field Jamaican with a steroid-addled attitude. And even then it seems to exist in its own parallel universe, adding its own distinctive originality to the pantheon of the whites. It started off, for example, with one of the most distinctive series of smell notes I’ve ever experienced: wet ashes from a campfire, rain on hot baked earth, mixed with pickles and gherkins. The oily saltiness of a tequila but without the muskiness. It’s also vinegary, citrus-y, sharp, acidic, and beneath all that is sugar caned sap, very light fruit, vegetable soup, olives and more brine. And plastic. I mean, wow. Newbies beware, experts be warned – this rum is not the kind that makes sugar cane turn up at your door demanding its juice back.

As if dissatisfied with its own aromas, the rum seemed to feel it had to add even more notes to the tasting when drunk. So, many the above smells made a re-appearance on the palate – ashes (I swear this is almost like licking a stone), olives and brine, lemon rind, gherkins in vinegar to start – before the brininess retreated and additional varnish and turpentine hints emerged, which went right up to the edge of being gasoline. The sugar cane sap thankfully mitigated that, adding lighter swank, watermelon and lemon to the mix, miso soup, sweet soya and a ton of veggies. It was, really quite a collection of different tastes, and even the finish – long, lingering, with sweet and salt, acetones, cigarette tar and more herbals – completed what was a rum of startling, almost ferocious originality.

All these tastes aside, what did I actually think of it? Well, as noted, I think it may be one of the most unique whites I’ve tried in a long while. It’s different, it’s original, it hews defiantly to its own profile without genuflecting to anything else. It’s not trying to be a clairin or a Jamaican or a grogue or a cachaca, and has at best a glancing familiarity with the ester bombs of Reunion and Hampden and Worthy Park. Fruits are a bit lacking, sweet and salt combination is fine, and earthy, musky notes are bang on. “Traditional” may be how it’s made, but surely not in its overall taste configuration. It gets points for being one of a kind, yet be aware that it is not necessarily one you’d appreciate neat. This is a cocktail lover’s dream, one that would drive bartenders into ecstatic fits because it would wake up and make new any old faithful, or kickstart any creation they feel like coming up with.

Paranubes may be one of the first Mexican rums to make a dent in people’s perceptions that Mexican liquor is just mezcal or tequila (and rums like Bacardi, Los Valientes, Mocambo, Prohibido et al). Locals will know of aguardiente, and Americans and tourists who visit the back country will likely be familiar with it — now it’s the turn of the wider world, not least because it’s available in the US, and may start appearing in Europe as well, with the added cachet of artisanal production, traditional methods, and a taste that is quite simply in its own universe.

Is such pure rum-making an oncoming wave of the future for the independents? Ask Luca Gargano of Velier and you’d probably get a resounding yes, and if you look carefully at the rums with which he personally associates himself, you’ll see that old-school, artisinal, natural rums are his personal and pet passions – clairins, grogues, Rivers, Hampdens are just some of the varied rums he holds close to his heart. By that standard, he must be frothing at the mouth over the Paranubes. Me, I believe that this simply made, small-batch artisanal rum takes its place immediately in any list of tonsil-shredding whites as one of the most original, potent, pungent, and flavourful rums currently extant. It’s that interesting right out of the gate, and is tailor-made for those who are looking to dispel boredom, and want to explore the bleeding edge of rums that conform to no rational standard.