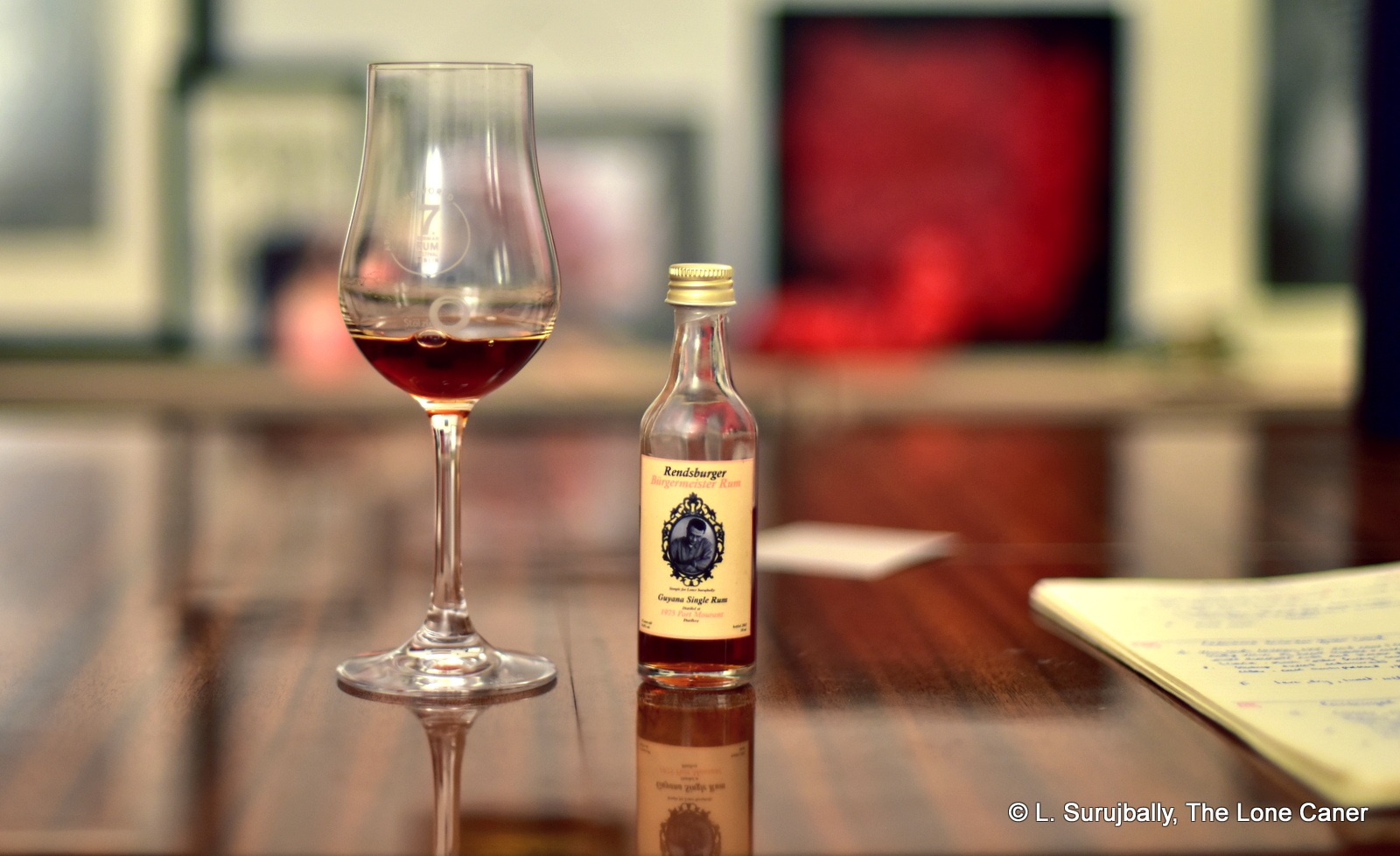 If you’re looking at this title and muttering to yourself “What the hell is Rendsburger?” you’re certainly not alone. Aside from Spirits of Old Man out of Germany or Norsk Cask from Denmark, they may be among the least known independent bottlers out there and before a bunch of samples drifted across my scope, I sure hadn’t heard about them either. Strictly speaking, Rendsburg is the north-west German town close to Flensburg in which the parent company Kruger – a small, family-run whisky and spirits specialist mainly known for its large whisky auction house – has its home. Therefore they have much in common with the makers of White Cat, the eminently forgettable white rum I looked at some time back and share some of the same centuries-old trading DNA which made the history of the White Cat more interesting than the rum itself.

By now many of us still-specific rum nifflers more or less agree that the 1970s were very good years for rum, especially the period 1972-1975 which is the source of many amazing products made by independent bottlers in the first decade of the new millenium and which at the time of issue were pretty much ignored. Rums like the Velier PM 1972 and PM 1974, the Norse Cask PM 1975, BBR 1975 PM, Silver Seal 1974 28 YO Demerara…the honour roll is long and distinguished, even if we can barely source them any longer and they’re drifting into “unicorn” status.

That a small outfit like Kruger – which doesn’t really “do” rums – could bring out something as excellent as this says a lot for the heritage stills DDL now has dibs on, and how far back they go (and perhaps, how underutilized they were as marques in their own right until quite recently). Kruger named its rums after the town in which they operate, slapped the picture of various mayors on the line of outturns of whiskies and occasional rums…and somehow in the middle of all that, managed to pick up a barrel the likes of which Velier would have been proud, issued a 56.9% 32 year old PM in 2007 and met with exactly zero fanfare and almost total indifference.

How this aged rum created nary a ripple in the wider rum world – even back in 2007 – is mystifying. It’s a real Port Mourant beefcake in all the ways that matter. Sniff this dark brown monolith and just revel in the deep, dark aromas: slightly bitter chocolate, licorice, backed up with salt caramel ice cream, a thrumming undercurrent of molasses, and that was just in the first sixty seconds. It let forth billowing fumes of anise, dark fruits – prunes, plums, blackberries, overripe cherries, raisins, to which were added (over some hours) sweet soy with just enough salt to add some character, faint citrus, smoke, leather and even a touch of vanilla. 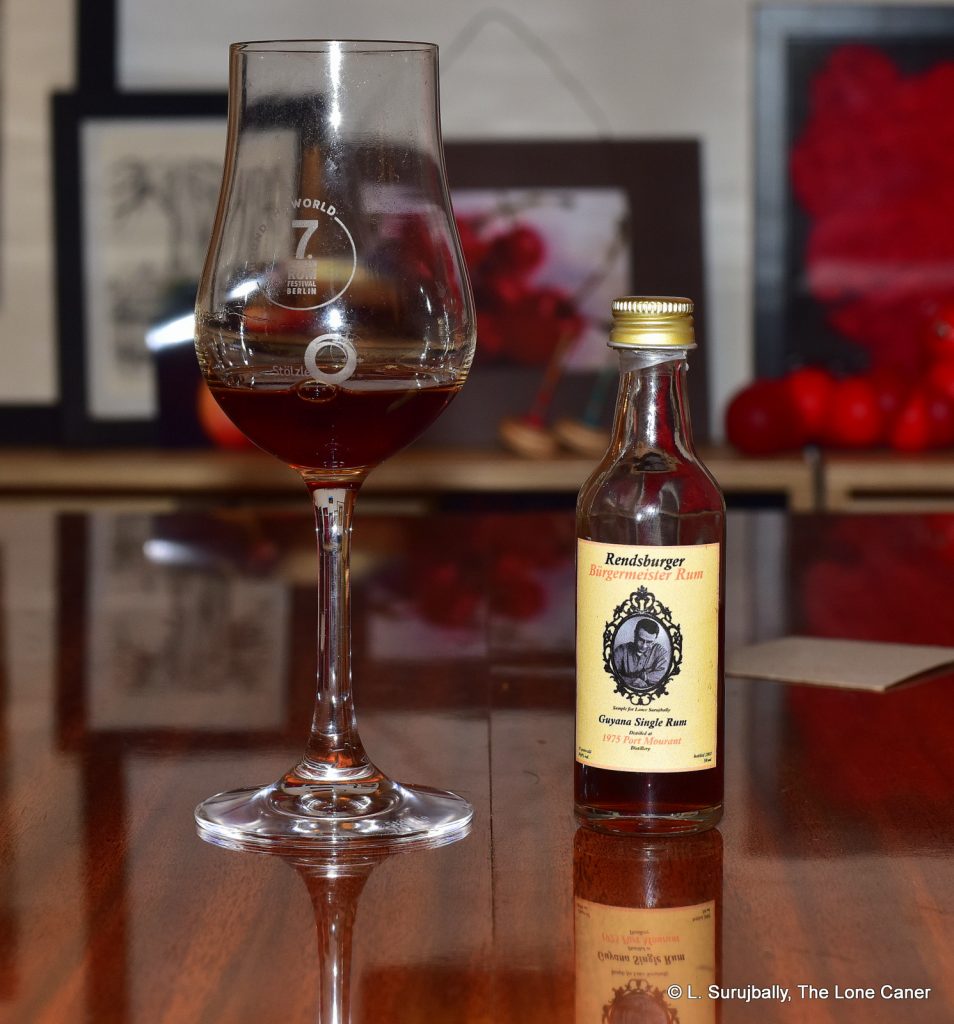 As for the palate, man, I’m in heaven, because I just found another 1975 to add to the pantheon. That same growling, thick richness of the nose segued to the tongue with no pause, no hesitation and no detours. The strength was near perfect – it gave strength without sharpness, allowing all the flavours to march solidly across the stage and present themselves one after the other: licorice, vanilla, caramel, bags of fruits, a little saltiness, biscuits and cereal. The whole thing was warm and thick with dark flavours that never seemed to want to stop showing off and even the oak, which at first I thought started to take on an unhealthy dominance after some minutes (I was actually writing “Mozart just exited the scene and is replaced by Salieri!” before crossing it out), retreated into the background, chilled out, and was (to my relief) content to be a part of the troupe rather than a scene stealing hog. The exemplary and traditional Port Mourant profile finished long, slow, voluptuously and with chocolate, coffee grounds, some oak, vanilla, raisins and anise, and overall, my take was it was simply one of the Grand Old Men of the plantation and the still.

Of course, when it comes to Guyana, Enmore and Port Mourant are the stars of the show, boasting well-known and oft-analyzed profiles, and name recognition nearly off the charts. Versailles rums, good as they are, often live in their shadow. What this means for deep-diving rum nerds, is that the PM profile may be one of the best known of its kind, its variations endlessly dissected, the minutest deviations pondered over by PhD students in rumology. Here, I submit there’s no need — the rum is superlative. It’s one of the best of the independent Port Mourants rums in existence and shows how high the bar has been set not only by the rums listed above, but by itself. It’s a bottle hungering to be cracked, has a cork demanding to be popped…an ambrosia begging to be sampled, drunk, enjoyed and, damnit, shared.

As I unhurriedly went through this rum, leaving many others to await their turn another day, I thought of W. H. Davies, who wrote in “Leisure”

What is this life, if, full of care

We have no time to stand and stare?

Here we do need to stand and stare, I think: because rums like this need to be savoured, to evoke dreams of old days gone by; not hurried over, or guzzled quickly and moved away from as the next hot-snot new bottling comes on the scene. It rewards not only patience but slow appreciation, and about the only regrettable thing I can say about it is how rare it is, how unknown. For rum junkies in general and Port Mourant lovers in particular, it conjures memories, exhilaration and, at the end, perhaps even a little sadness. It’s simply that kind of experience, and I’m glad I managed to try it.