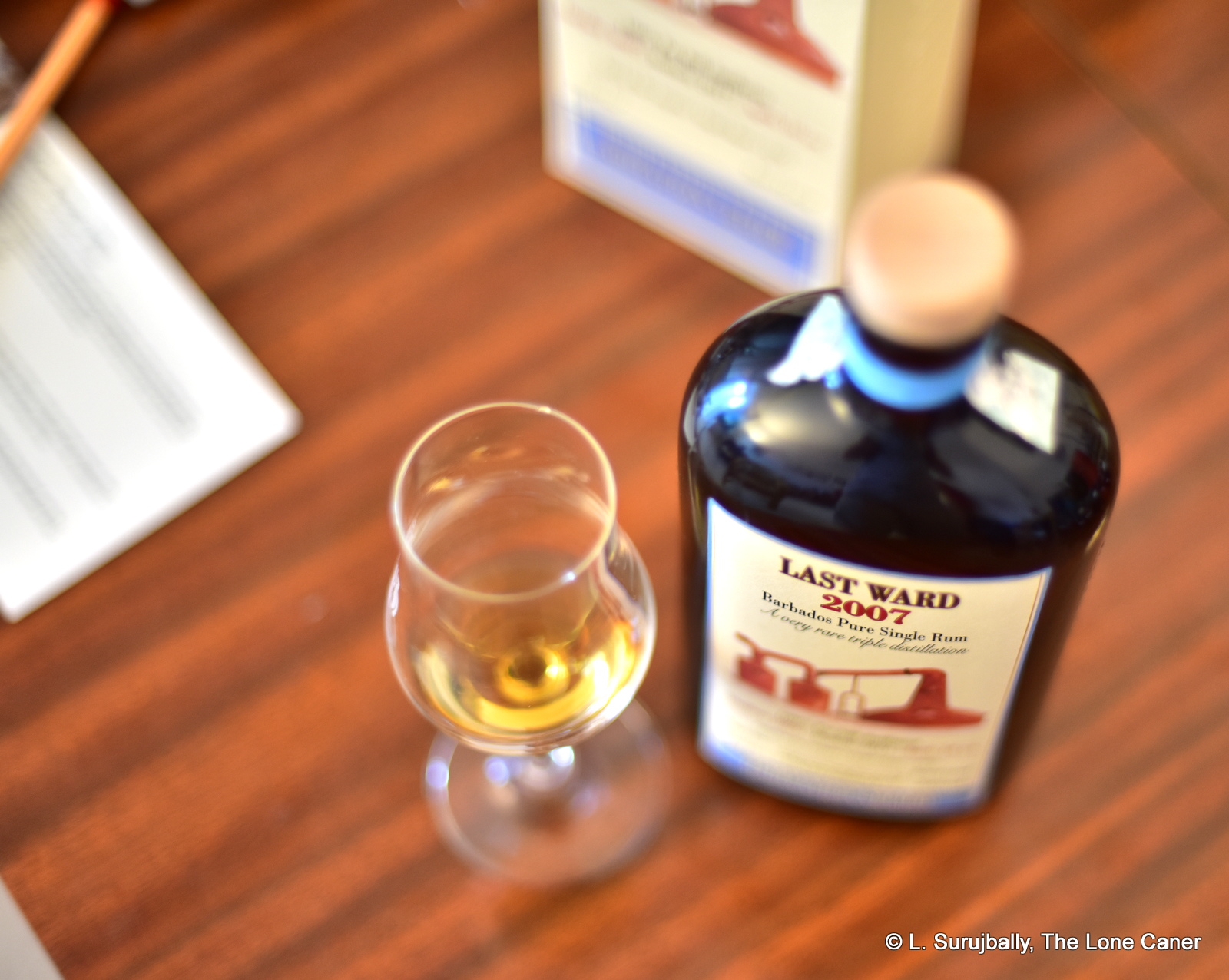 Velier’s Last Ward is an elegaic and haunting rum that evokes memories of old times and old places, yet is brought smack bang up to date for the modern connoisseur and rum lover. It is a summing up of all things Mount Gay that matter if you’re in tune with it, just a really good rum if you’re not, and is one to savour and appreciate and enjoy no matter what your state of mind or preference in rum. One can only wonder, with all the great distilleries that are represented in the independent bottlers’ more popular and better-known wares, how a small batch production like this one was ever conceived of, let alone made it out to the general marketplace. It is one of the best rums from Mount Gay not actually sold under the brand.

The “Last Ward” is about as evocative a title for a rum as I’ve ever come across. It breathes of Barbados, of history and of rum. It speaks to the Ward family who ran Mount Gay for over a century (Aubrey Ward acquired it in the early 1900s) and still appear to have involvement with the company which was officially in existence since 1703 (unofficially much before that) and acquired in 1989 by Remy Cointreau. Frank Ward started producing a brand called Mount Gilboa in 2007, naming it after the original plantation and distillery before it had been renamed in 1801 after Sir John Gay Alleyne, whom John Sober had inveigled to manage the new company when he had bought it in 1747.

Did all that history and age and heritage translate into a rum worth drinking? It’s not always the case, of course, but here the answer is a firm yes. It started with the nose, where the very first word of my notes is “Wow.” It was smooth and heated, handling the 59% ABV quite well, smelling of furniture polish, leather, light flowers, bags of white chocolate, nougat, toblerone, coffee grounds and salt caramel. It was aromatic enough to make me think of a warmer, softer Savanna Lontan, to be honest, and continued with almonds, pecans and vanilla, all of which harmonized into a nose one might not initially pick out as specifically Bajan, but which was definitely worth spending some time with.

The palate developed with somewhat more force, being sharp and intense without losing any of the aromatic character I liked so much on the nose. Oak took more of a leadership role here, and behind it coiled flavours of flowers, citrus and marzipan. Letting it stand for some time (and later adding some water) cooled it down and allowed other components to emerge – bon bons, more caramel, coconut shavings, bananas, white chocolate, tied together with a vague complementary sweetness which made the whole experience a very approachable one. The sharpness and intensity which began the taste was almost totally morphed to something quieter and by the time the finish arrived. And that was very pleasant indeed, long lasting, sweet, with caramel and vanilla walking a fine line next to orange peel and nuttiness.

Almost everything about the production details is stated clearly on the label in a fashion that shames brands who indifferently genuflect to the concept (like for instance the Dictador Best of 1977, remember that?): double retort pot still origin; triple distilled in 2007, aged ten years in Barbados with an angel’s share of 65%, no sugar, issued at a robust 59% ABV. About the only thing missing is in what kind of barrels it was aged in, but those are ex-bourbon, so now you know as much as I do. (As an aside for those who like such details, the still is made by McMillan from Scotland, who are still in business making copperware for distilleries the world over, and have been ever since their founding in 1867).

Mount Gay has now started producing its cask strength series of the XO (63%) which I thought was very good, a German indie called Rendsburger made a 1986 Rockley Still 18 year old rum I quite liked, and we’ve been trying various WIRD rums for years now — these demonstrated with emphasis and aplomb what could be done even if you didn’t hail from Foursquare…and this rum is as good as almost all of them. Just about everything works here, comes together right – it finds the intersection of a name redolent of memory, a presentation in quiet pastels, all married to a profile of strength, reasonable complexity, and, dare I say it? – even beauty. 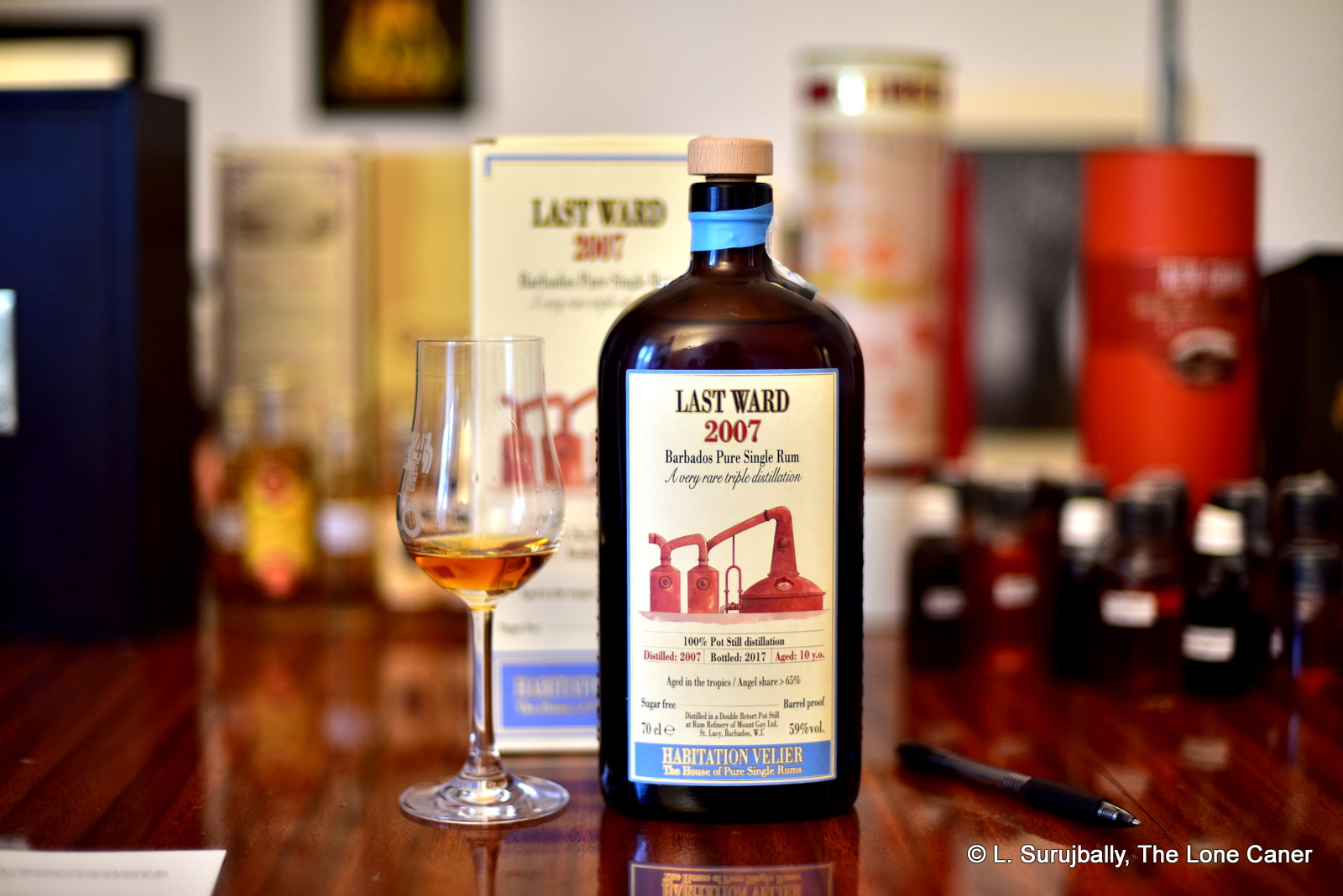 If I had any note of caution to sound about the matter, it’s that those who like fierce and brutal purity in their cask strength rums might not entirely appreciate one which is firm rather than sharply distinct, and rather more diffuse and melded together in a way that makes individual notes lack a certain clarity; and the pot still heritage is not as evident as I might have liked – but to me that’s a minor whinge….overall, this thing is good. The Last Ward is a like a WIRD rum taken out to left field and torqued up to just about the max, and represents a triumph of the imagination as much as the better known Foursquare Exceptional Cask series or Mr. Seale’s collaborations with Velier. It may not entirely beat the Foursquare 2006 10 year old, but believe me when I say that that is no reason to leave it on any shelf where you see it.

Both The Fat Rum Pirate and Single Cask Rum, whose reviews are also available, noted that it derived from 19 of the oldest barrels remaining. Luca got back on to me and aside from confirming the 19 barrel number, said the actual outturn was 4,746 bottles.