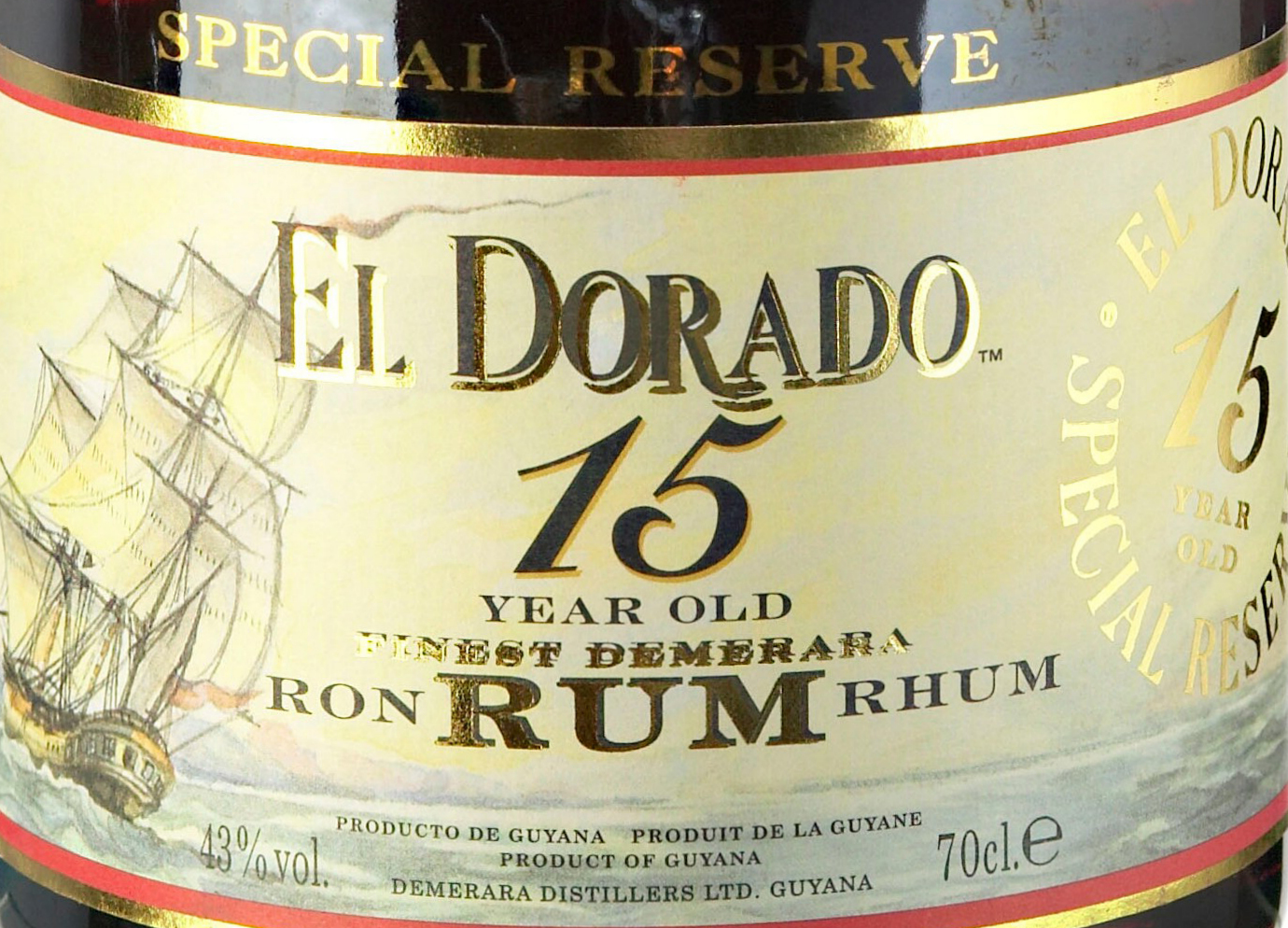 Seen over a span of decades, it is more clear than ever that the El Dorado 15 year old is a seminal rum of our time. “It is a bridge” I wrote back in 2010 in my unscored review, remarking that it straddles the territory between the lower end twelve year old and the 21 year old, and represents a sort of intermediary in value and price and age. The best of all worlds for El Dorado, you might say, and indeed it remains, even twenty five years after its introduction in 1992, one of the most popular rums in the world for those who enjoy the Demerara style. Any time a blog or website has a series of comments on favourite affordable rums, you can be sure it’ll find its way in there somewhere. It cannot be easily ignored, even now in the time of independents and cask strength Guyanese monsters aged beyond all reason.

That it succeeds at so effectively colonizing our mental map of good rums bottled at living room strength is a testament to its marketing, but also its overall quality. DDL themselves tacitly accept this by not only keeping the rum in production for over a quarter century, but chosing specifically that one to issue with a number of fancy finishes (and for a very good rundown of those, look no further than RumShopBoy’s complete analysis, and his separate conclusions, as well as the Quebec Rum’s (French) reviews the only ones available right now). My irascible father, no rum slouch himself, scorns all other rums in the El Dorado range in favour of this one. Many Guyanese exiles wouldn’t have their home bars without it. What the actual quality is, is open to much more debate, since all rumhounds and rumchums and rabid aficionados are well aware – and never tire of saying – that there is 31-35 g/L of additives in there (either caramel or sugaring, it’s never been definitively established), and by that standard alone it should, like the 21, be consigned to an also-ran.

But it isn’t. Somehow this rum, a blend of the PM, EHP and VSG stills – which is to say, all the wooden stills, with the PM dominant – keeps on trucking like the energizer bunny, and, love it or hate it, it sells well year in and year out, and has fans from across the spectrum. 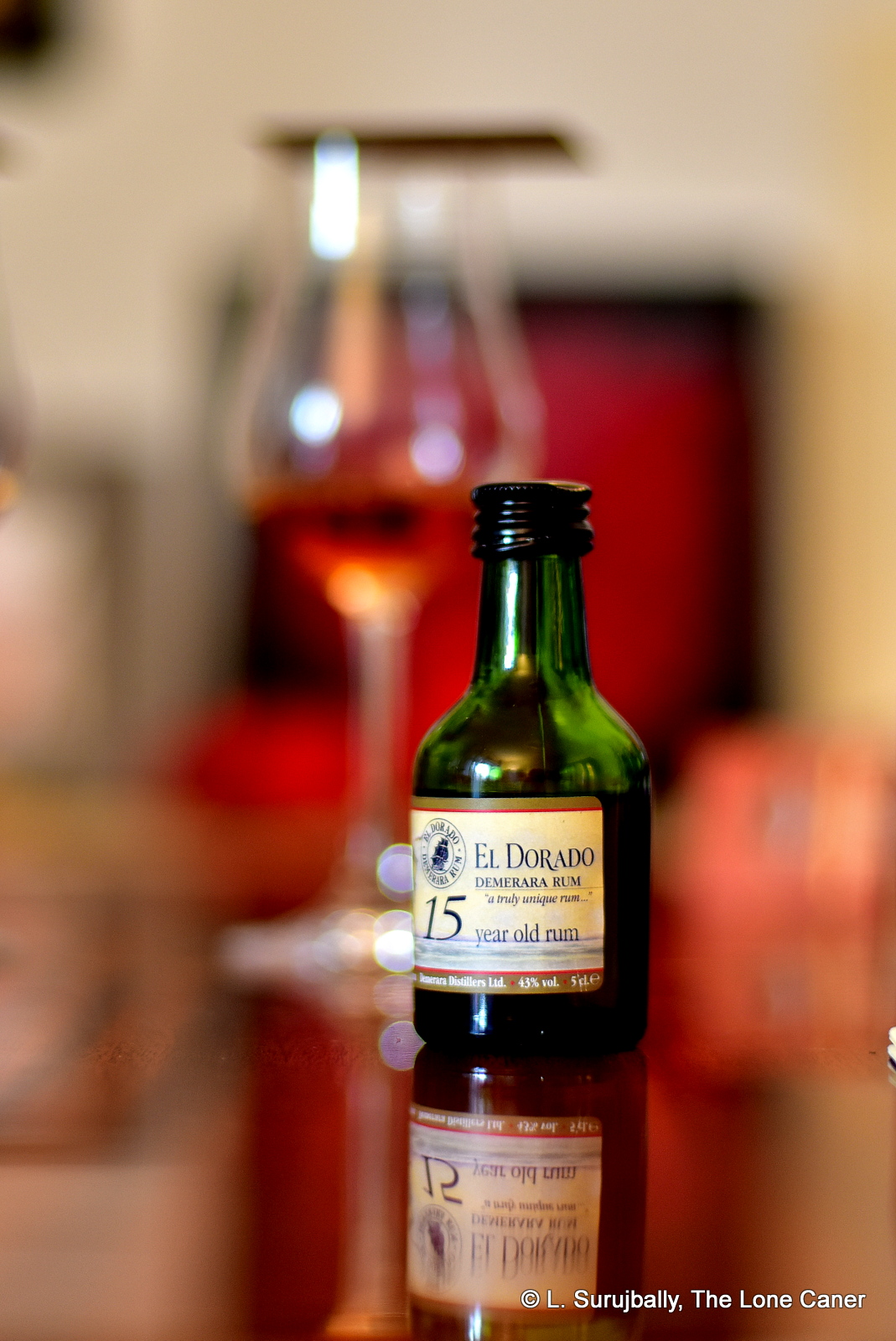 Tasting it in tandem with the 12 year old (I’ll do a revisit of this as well soon, though not as part of the Key Rums series) and the 21, it’s clear that it possesses a bit more oomph than it’s younger sibling, in all aspects. Not only in strength (43% ABV) and age (three years more than the 12), but also in overall quality. It noses quite well – licorice, anise, creamy caramel, bitter chocolate, leather and smoke. Orange rind. Some mustiness and vague salt – basically all the things that the cask strength indies demonstrate, with good complexity and balance thrown in…but somewhat more dampened down too, not as fierce, not as elemental, as what might have been the case.

The various hydrometer lists around the place have shown there’s adulteration going on in the rum, and there is no doubt that when you drink the 15 in tandem with clear, untouched rums, the softening effect of the add-ons are noticeable. What is astounding that even those levels don’t entirely sink the experience. Consider: it’s smooth and possesses depth and heat. It starts with licorice, and adds oak, some smoke, then slowly the dark fruits come into play – prunes, raisins, black olives, overripe cherries. There’s some honey and the faint molasses background of coarse brown sugar. In every way it’s a better rum than the 12 year old, yet one can sense the way the flavours lack snap and crispness, and are dumbed down, softened, flattened out – the sharp peaks and valleys of an independently issued rum are noticeably planed away, and this extends all the way to the finish, which is short and sleepy and kind of sluggish, even boring: sure there’s caramel, molasses, oak, licorice, nuts and raisins again, but didn’t we just have that? Sure we did. Nothing truly interesting here.

All that aside, I’d have to say that for all its faults, there’s a lot to appreciate about this particular rum. Much like the 21 it rises above its adulteration and provides the new and not-so-demanding rum drinker with something few rums do – a particular, specific series of tastes that almost, but not quite, edge outside the mainstream. It gives enough sweet to appeal to those who bend that way, and just enough of a distinctive woody-smoky-leathery profile to attract (and satisfy) those who want something heavier and more musky.

Now, let me be clear – a superlative demonstration of the blender’s art this is not. It is not one of the fiercely pungent Jamaicans, not a lighter, clearer, crisper agricole, nor is it an easy going Cuban or Panamanian, or a well-assembled Bajan. I think it’s eclipsed even by the single-still offerings of DDL What it really succeeds at being, is well-nigh unique on its own particular patch. Its success rests on great appeal to the masses of rum drinkers who aren’t drinking a hundred different rums a year, and who don’t take part in the Great Sugar Debate, who just want something tasty, reasonably well made and reasonably sweet, reasonably complex, that can be either sipped or swilled or mixed up without breaking the bank. It’s on that level that the El Dorado 15 year old succeeds, remarkably well, even now, and is a tough, well-rounded standard for any other rum of its age and proof and point of origin to beat. Or at least, in the opinions of its adherents.