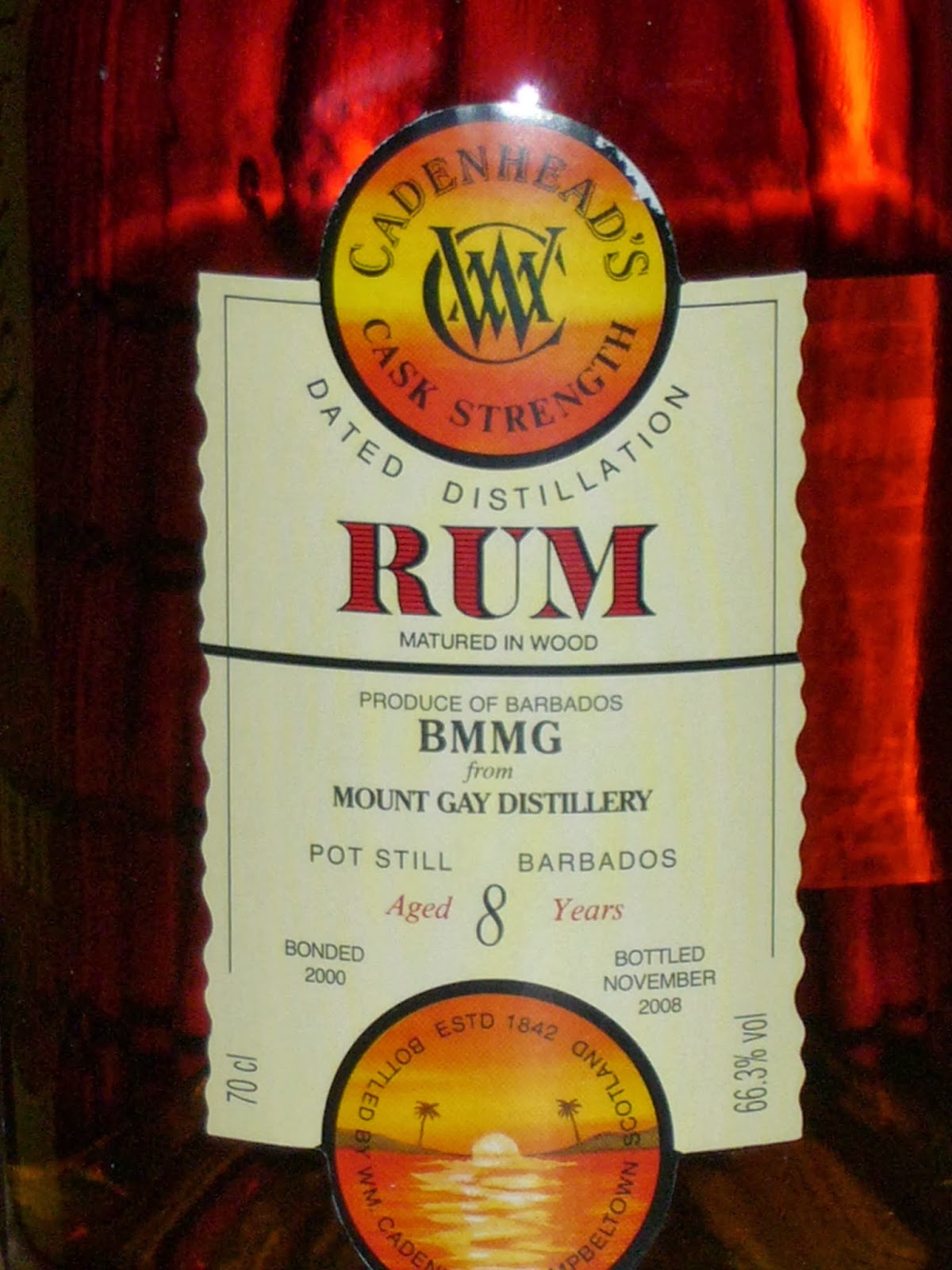 Mount Gay out of Barbados is somewhat in the background of Bajan rum-making these days, maybe feeling like Huzur in Satyajit Ray’s 1958 classic “The Music Room”. Understandable, since all the headlines these days are about the 2006 ten year old, the Criterion, Triptych and all the other amazing Foursquare releases. And that’s a shame because there are some interesting indie bottlings out there from the island, as well as Mount Gay’s own recent cask strength work which I’ll get to one of these days.

Today, then, let’s discuss the mastodon of the Cadenhead BMMG 66.3% which was pot-still distilled in 2000 and bottled eight years later…consequently, it somewhat predates the Golden Age of Cask Bottlings through which it could be argued we’re living – no doubt that’s why few who don’t follow Marco’s work or aren’t Cadenhead fans have heard of the thing. As is usual with Cadenhead, there’s no info on what the four letters mean, but since we’re all smart fellows here (anyone who braves my convoluted parenthetical phraseology almost has to be), I think we can hazard a guess that the “B” is for Barbados, the “MG” is for Mount Gay, which only leaves the mystery letter of the second “M” – and I’m going to suggest “Massive” as a reasonable identifier, because 66.3%, whew, that’s not exactly milquetoast now, is it? Oh and as usual, one can infer zero additives or other mucking about – that’s standard for the Big C. 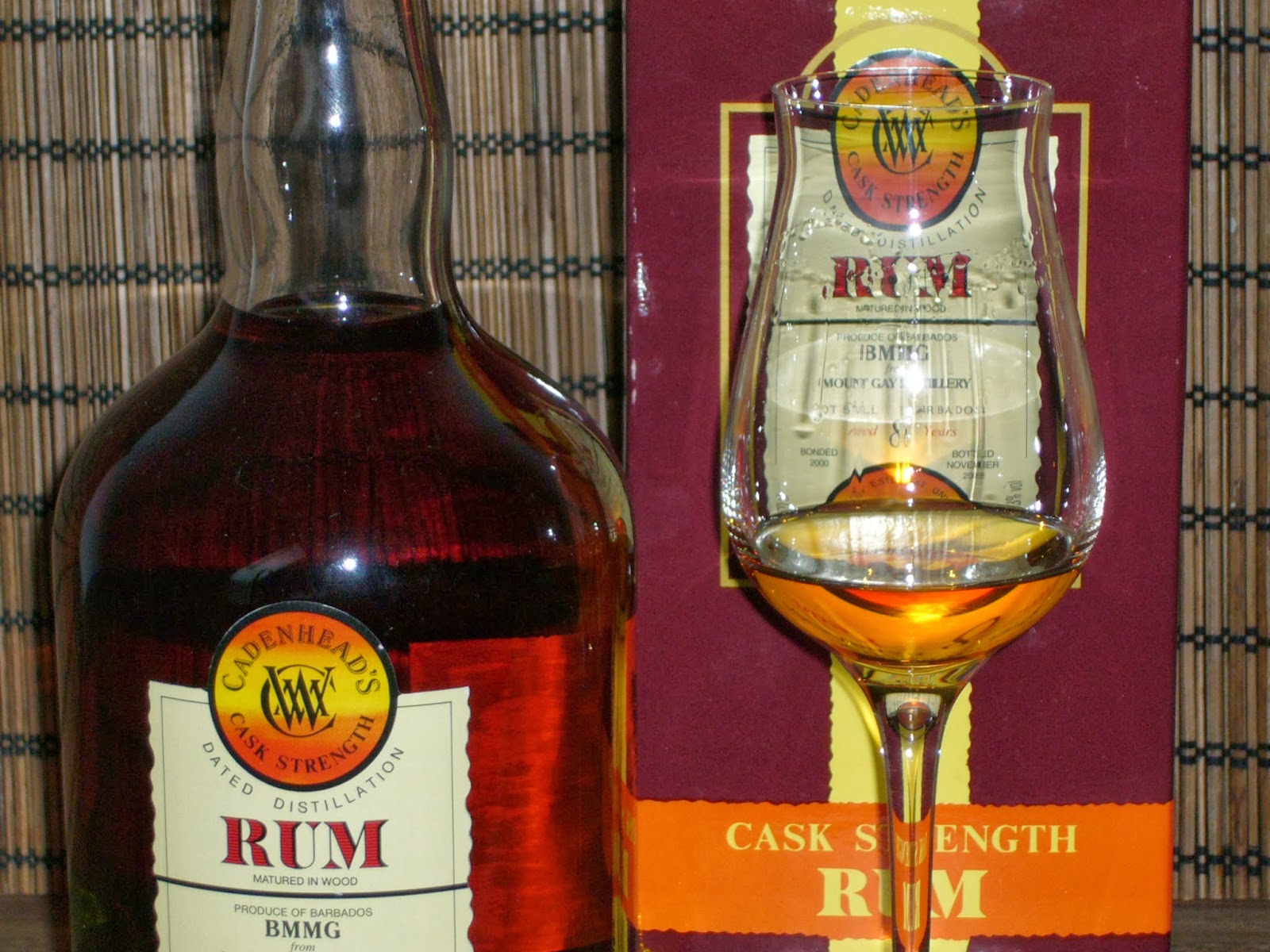 That out of the way, let’s dive right into the nose without further ado. At first sniff it was definitely not a Jamaican or a Guyanese rum – it was redolent of flambeed bananas, honey, nutmeg and peaches, rich and pungent…and that was a good thing, because at that strength it would otherwise have been way too serrated for anyone’s nose to take easily and even as it was, it really took some adjustment. This was one of those occasions where I added some water even before tasting to see what would happen, and this coaxed out some additional salty caramel and cherries in syrup at the back end, plus oak and faint licorice, mangoes….and coffee, which surprised me, since it’s not an aroma I commonly associated with Little England.

As for the palate, well, sharp is sharp and this one carved its way down my gullet with intent to rearrange my insides. There were bananas and caramel, vanilla, nutmeg and oak, those were easy takeaways – one had to get past the power to find more, and here again water did help. Once it settled down (or I did), I sensed more coffee, fruits – mangoes, papayas, cherries for the most part, clear and distinct at first but then they took a backseat and caramel, almonds, nutmeg and slightly sweeter coffee notes took center stage. Although it sort of worked, it just seemed, overall to be a bit too jagged, too raw – it was hard to decide whether dialling down the volts would have made it better, or ageing it for longer, because continental ageing for a “mere” eight years doesn’t exactly smooth out the rough notes, the way an equivalent in Barbados might have. This was more clear on the finish, which one really had to be careful with because it was long, and quite intense, very hot, leaving us with vanilla, some oak, yet more coffee and some background off-key nuttiness which didn’t blend well, and was fortunately not there for a long time.

Lonely, austere and brutal as an Edward Hopper painting, this is not a rum for the weak-kneed, proof-challenged or saccharine inclined. It’s frenziedly, almost rabidly assertive, and though I am giving it a guarded recommendation, I must also point out that somewhere along the line the balance was a bit off and the tastes didn’t play that well together. Part of the issue (surprisingly, for a cask-strength lover like me) is the strength – here 66.3% really is a bit much. Intense and powerful for sure, with all that this implies — but we must guard against the notion that just because some 65-70% juggernauts are so great, that high proof automatically confers great quality without question. This is not a rum that walks up to you and then sits down for a chill on the beach waiting for your inevitable appreciation…on the contrary, it’s a furious frontal assault of proof on the senses, and afterwards, picking oneself off the floor, one might be left wondering whether something less strong, something slightly older, might not have been better, and more easy to come to grips with, after all.