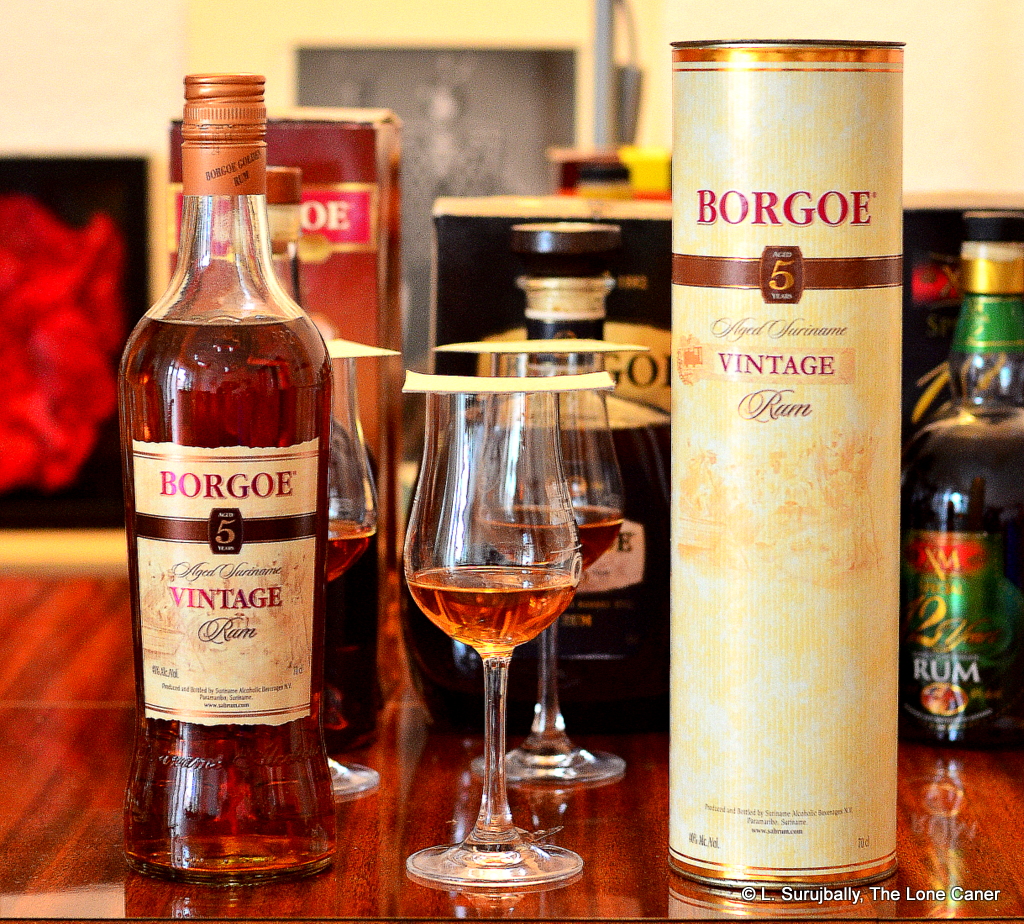 Agricoles and pot still rums aside, one does not usually expect too much from a three year old blended rum such as is the Borgoe Extra Gold we looked at earlier– although they retain their capacity to surprise — and so I had higher hopes for the five, since such lightly aged rums are often the solid pillars upon which many rum makers support the edifice of all their older (and sometimes even younger) rums. When well made, they may even edge into sipping territory, serve as the first firm introduction to the ethos of the company and can sometimes be a nice bridge between a cocktail agent and something to have by itself (with or without ice). Agricoles and pot still rums are particularly noted for such quality

To some extent this is the case with the Borgoe “Vintage” 5 Year old from Suriname, made by the same bunch of guys who did the “Extra”. There is, alas, very little hard information to go on here, over and beyond what I’ve already mentioned in the Extra review: it’s a primarily column-still rum issued at 40%, the molasses are sourced from Trinidad (Angostura), there may be some pot still distillate meandering in the blend somewhere, and the whole thing is aged in American oak. Beyond that standard information, both my contacts and the official webpage are silent. Still, in a way that’s an advantage since it forces us to simply address what’s on show without any extraneous material unconsciously cluttering up our minds. And overall, there’s little that’s bad about the Vintage expression. If I had to use a single word to summarize this five year old, it would be “inoffensive”, or with two, “happily uncomplicated.” 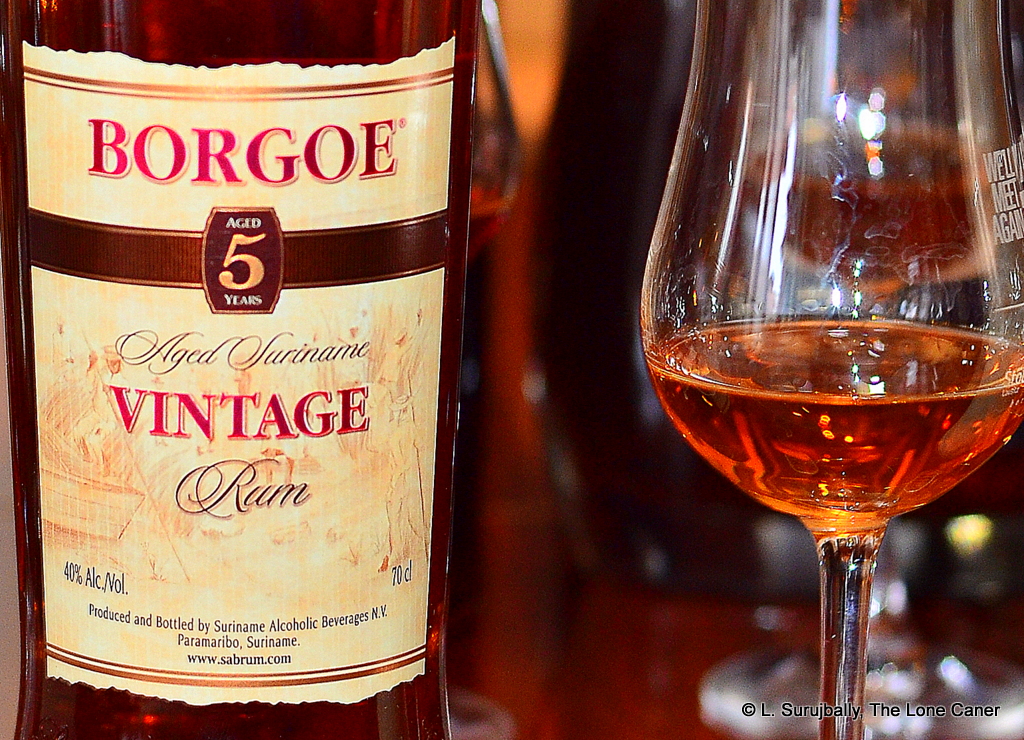 That might be damning it with faint praise, but not really. The nose gives an indication of what’s in store: it meanders out calmly and easily, warm and without bite, a little creamy at first; it presents as somewhat sweet, though not overly so – and after settling down, if one takes one’s time with it, there are additional and faint background notes of breakfast spices (nutmeg and cinnamon, perhaps a clove or two), plus cereals, nuts, a little vanilla and some flowers. It’s certainly not reaching for the stars and seems content to stay with simplicity for effect.

The palate demonstrates more of that placid nature: again it was warm and not altogether spicy or sharp, and although it did seem somewhat thinner than one accustomed to more powerful drinks might appreciate, it was also reasonably smooth, and a rung or two up the ladder from the Extra. Crème brulee, caramel and molasses were the dominant notes at the inception, with vanilla and some oaken tannins bringing up the rear. Setting it aside for some minutes is probably a good idea for those who want more: after a while, subtler flavours crop up, citrus, flowers, guavas, a few watery pears and a sharper slice of green apple in the mix there someplace. I particularly enjoyed the languid French toast and honey that shyly danced in the background, and again the breakfast spices were there, not as distinct as the nose suggested they might be. The finish, short and faint as it was, was at least aromatic, with the fruits fading fast now, and mostly showing off some sweet tangerines and caramel.

All right then, let’s sum up. For one used to aggressive young agricoles and fullproofs of any age, this is probably a rum to avoid, since everything is very much dialed down with a feather blanket, and it might work best in a delicate mix that others know more about than I do. It’s pleasant and inoffensive, as noted above, and I find it too bland to appeal to me personally. Perhaps its real issue – one that would not lead to parades of rabid aficionados cluttering up whole Facebook pages with songs of praise – is the fact that is still somewhat generic, and seems have no problem in being an agreeable but indeterminate rum, one that simply exists. Rather than anything particularly Surinamese, it reminds me of a Botran 15 Solera, a Cacique 500, or a Tres Hombres rum. It’s light, easy and uncomplicated enough to take by itself, but this comes at the expense of some originality and were I to come back to it sight unseen a month from now, I’m not entirely sure I’d remember it clearly.

For the kind of quality I was looking for, I had to go up to the 8 and 15 year old expressions, which we’ll look at next time.