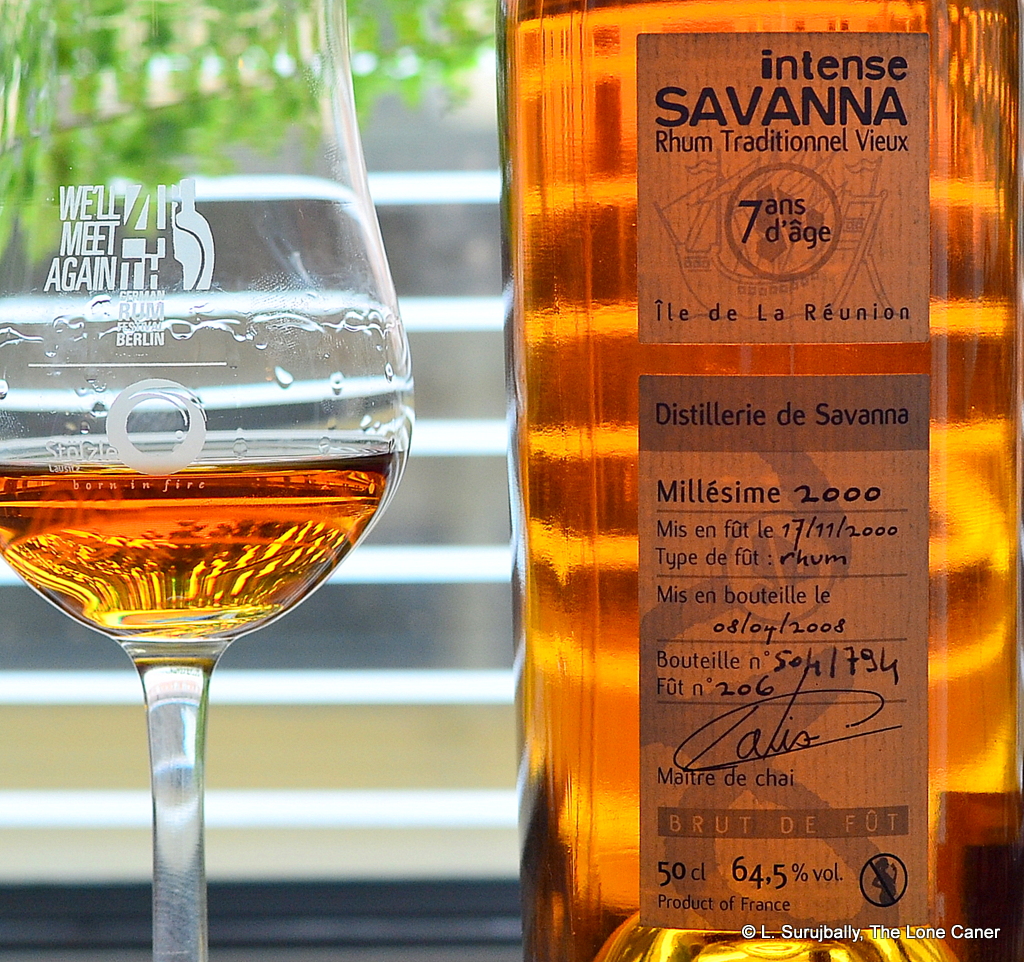 Our global rum travels have moved us around from Japan, Panama, Barbados, Guadeloupe, Brazil, Nicaragua, Jamaica, Antigua, Laos and Mauritius (and that’s just within the last eight weeks); so let’s do one more, and turn our attention to Île de la Réunion, where, as you might recall, three companies produce rums – Rivière du Mât, Isautier, and Savanna, with Isautier being the oldest (it was established in 1845 and is now in its sixth generation of the family). If one wants to be picky Savanna has existed for far longer, but the company in its modern form dates back only to 1948 and lest I bore you to tears with another historical treatise, I refer you to the small company bio written as an accompaniment to this review.

Savanna is unusual in that it makes both agricoles and traditional, so it’s always a good idea to check the label closely – the French word “Traditionnel” refers to a molasses-based product. And take a moment to admire the information they provide, which is quite comprehensive (bar additives, which I somehow doubt they have). The rum I tried here was quite a beast – it was a seven-year-old year 2000 millésime distilled in November 2000 and bottled April 2008 with an outturn of just under 800 bottles, and issued at a whopping 64.5% – and that’s not unusual for them, as there are quite a few of such cask strength bruisers in their lineup. I’m as courageous as the next man, but honesty compels me to admit that any time I see a rum redlining north of 60% my spirit quails just a bit…even as I’m consumed by the equal and opposite desire (perhaps a masochistic one) to match myself against it. And here I’m glad I did, for this is quite a nifty product by any yardstick. 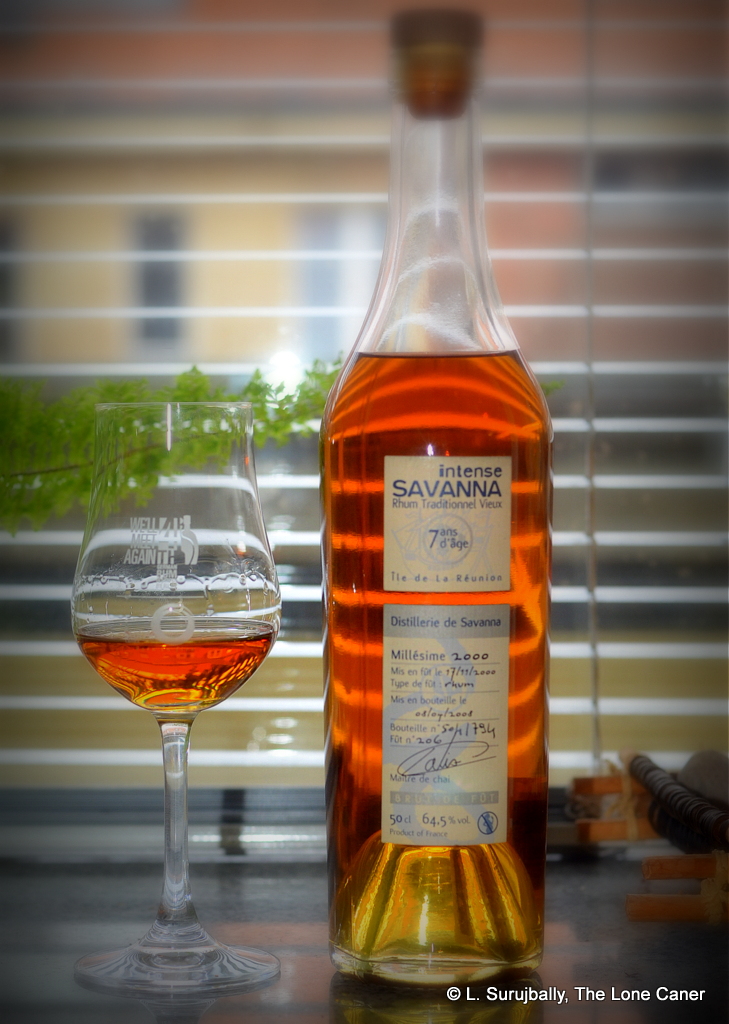 On the nose it was amazing for that strength – initially it presented something of the light clarity we associate with agricoles (which this was not), before turning deep and creamy, with opening salvos of vanilla, caramel and brine, vaguely akin to a very strong latte….or teeth-staining bush tea. It was weirdly herbal, yet not too much – that surprising vegetal element had been well controlled, fortunately…I’m not sure what my reaction would have been had I detected an obvious and overwhelming agricole profile in a supposedly molasses originating rum. And yes, it was intense, remarkably so, without the raw scraping of coarse sandpaper that might have ruined something less carefully made. I don’t always add water while nosing a spirit, but here I did and the rum relaxed, and gave additional scents of delicate flowers and a hint of breakfast spices.

The palate lost some of the depth and creaminess, becoming instead sharply crisp and clean, quite floral, and almost delicately sweet. Even so, one had to be careful to ride the shockwave of proof with some care, given the ABV. Frangipani blossoms, bags of tart fruits (red guavas, half-ripe Indian mangos and citrus rind) and vanillas were the core of the taste, around which swirled a mad whirlpool of additional, and very well balanced flavors of green grapes, unripe pineapples, more mangos, and peaches, plus some coffee grounds. It was powerful yes, and amazingly tasty when taken in measured sips. It all came down to the end, where the finish started out sharp and dry and intense, and then eased off the throttle. Some of the smooth creaminess returned here (was that coconut shavings and yoghurt I was sensing?), to which was added a swirl of brine and olives, grapes, vanilla. The way the flavours all came together to support each other was really quite something – no one single element dominated at the expense of any other, and all pulled in the same direction to provide a lovely taste experience that would do any rum proud.

So far I’ve not tried much from Réunion aside from various examples of the very pleasant ones from Rivière du Mât (their 2004 Millésime was absolutely wonderful). If a second distillery from the island can produce something so interesting and tasty in a rum picked at random, I think I’ll redirect some of my purchasing decisions over there. This is a rum that reminds me a lot of full proof hooch from Guadeloupe, doing much of the same high wire act between the clear cleanliness of an agricole and the deep and growly strength and flavour of the molasses boyos. It’s a carefully controlled and exactingly made product, moulded into a rum that is an utter treat to inhale, to sip and to savour, and I’ll tell you, with all that is going on under the hood of this thing, they sure weren’t kidding when they called it “Intense.” It’s not a complete success, no, but even so I’m annoyed with myself, now, for just having bought one.

Note: This intriguing 7 year old interested me enough to spring for another >60% beefcake from the company, the High Ester Rum from Reunion (HERR). The entire line of high-ester Grand Arôme rums made by Savanna is supposedly a bunch of experimental flavour bombs, so can you imagine what a cask strength version of that is like?