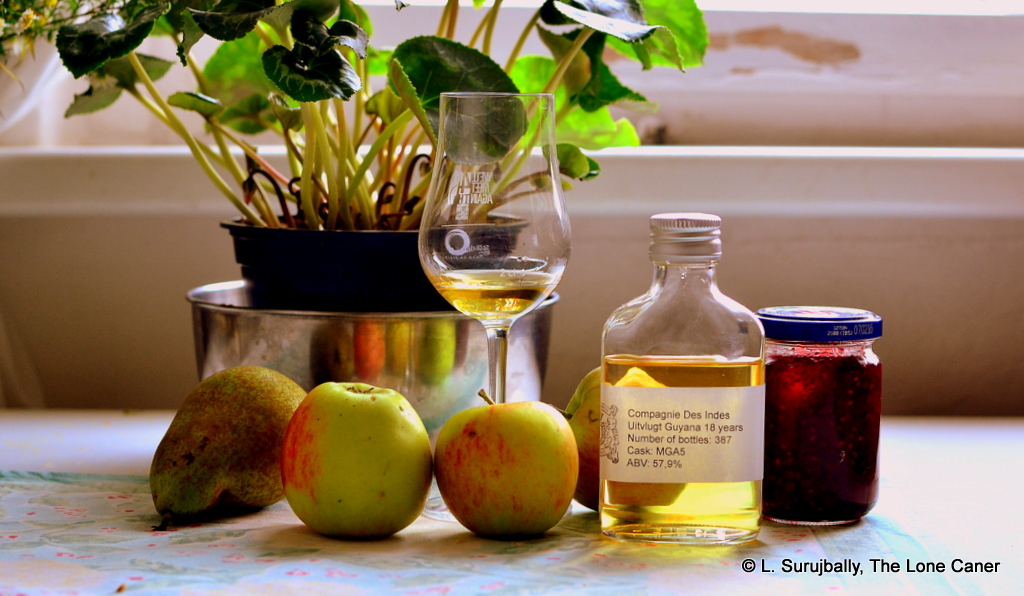 All grog-blog hoodlums and Danes know the story, and somewhere out there you can just bet the Danes are smirking.  Back when Compagnie des Indes was a new independent bottler just starting out, selling their initial 46%-or-so editions around Europe, the rum lovers from Denmark shook their heads and said they wanted cask strength rums.  Y’know, the real stuff, the ones dosed with huge quantities of whup-ass, coming with battleaxes taped to the bottle, not frilly pink cupcakes for the weak-kneed. Florent shuddered a little at the thought of a bunch of intoxicated rum-loving vikings turning up in France demanding their hooch in person, and hurriedly advised them that if they wanted that, they’d have to buy the entire barrel; after some haggling it was agreed and a whole bunch of cask strength rums were shipped north.  These proved to be so popular (and not only with the lucky folks for whom it was made) that they sold out in next to no time, left the rest of the world grumbling about how come they didn’t get any, and were the impetus behind the subsequent release of the Cask Strength editions by the Compagnie, beginning in 2016.

Having said all the above, the Uitvlugt outturn from Guyana is somewhat less well known than its brawnier cousins from the wooden stills which have formed a part of every navy rum ever made for literally centuries.  The Uitvlugt marque derives from the four-column French Savalle still, which was originally two two-column stills joined into one since their migration to Diamond, and according to DDL, can produce nine different types of rum (light to heavy).  Still, if you believe for one moment that a column still rum in general, or one from Uitvlugt in particular, is in some way less, then you have not tried the best of them all — the UF30E — or many of the other craft bottlings issued over the years.  And you can believe me when I tell you, this eighteen year old full proof rum that the Compagnie put out the door is no slouch either, and is just a few drams short of exceptional.

So, brief stats for the number crunchers: an eighteen year old rum, 1997-2016, 387 bottle outturn from cask #MGA5.  This is not the cask strength variation of the 45% 18 YO finished in Armagnac casks as far as I am aware, but a straightforward 57.9%.  And all the usual assurances of no additives, dilutants and other creepy crawly weird stuff that results in abominations like the Don Papa.  Also, it is pale yellow, which is a resounding response to all those who believe darker is somehow older.

None of the musky anise and dark fruits such as accompany the PM and Enmore marques were on display here, of course, but attention was drawn immediately to acetone and pencil erasers, underlaid with the strong smell of rubber laid down by a hot rod on a fresh made highway under a scorching summer sky.  Once this burned off – and it never really did, not entirely – the rum displayed a plethora of additional interesting aromas: mint leaves, wet cardboard and cereal, the tartness of fresh ginnips, and a deep floral sweet scent that was far from unpleasant, though here and there I felt the integration was somewhat lacking.

The palate, now here was a profile that demanded we sit up and take heed. Petrol and fusel oils screamed straight onto the tongue.  It was immensely dry, redolent of glue and fusel oils and bags of dried fruit, feeling at times almost Jamaican, if that isn’t stretching credulity too much.  For all that the rum had a real depth to the mouthfeel, and as it opened up (and with some water), lovely distinct  fruity flavours emerged (cherries, peaches, apricots, mangoes), mixing it up really well with lemon rind, brine and olives.  Even after ten minutes or so it was pouring out rich, chewy tastes, leading to a smooth, hot finish that was quite exceptional, being crisp and clean, giving up last notes of olives in brine, tart apples, teriyaki sauce, and a nice mix of sweet and sour and fruits, something like a Hawaiian pizza gone crazy. It wasn’t entirely successful everywhere – there were some jagged notes here and there, and perhaps the body would have been a little less sharp (even for something south of 60%)…but overall, a really well done piece of the rumiverse.

Bringing all this to a conclusion, the Uitvlugt is a powerful achievement, a delicious, strong, well balanced rum of uncommon quality that succeeds in almost every aspect of its assembly, falling down in only minor points.  It goes to show that while the Port Mourants and the Enmores of Guyana get most of the headlines and are far better known (and distinctive, don’t ever forget that), Uitvlugt may just be the little engine that could, chuggin gamely ahead, year in and year out, producing capable little world beaters every time.  If the UF30E or the 1997 Velier or the other rums from that still made by CDI didn’t convince you already that great stuff could come from this place, well, here’s another to add some lustre to the company, the still and the estate.