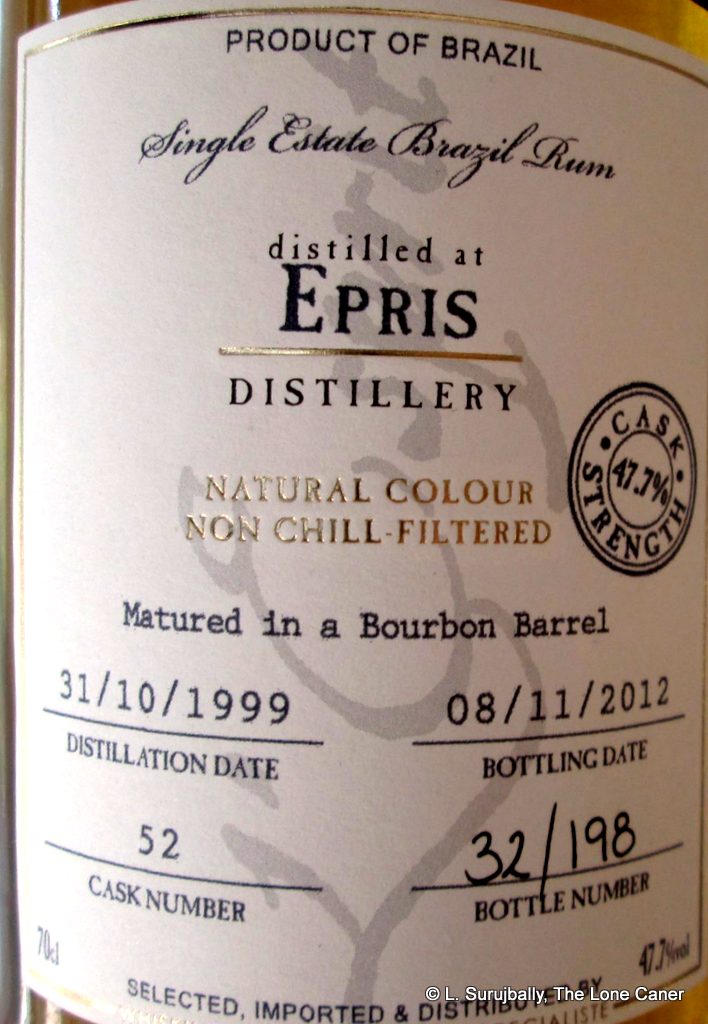 If originality and straying off the beaten path of the rumworld is your thing, wander no further. The thing is just a few stops short of being stunning.

This is one of the rare occasions where I tasted a rum blind, knowing absolutely nothing at all about it before I started…really, absolutely zilch. Not the country, not the company, not the distillate. I blame this on the pad I crash at in Berlin which has no wi-fi, no internet, no elevator, and what passes for hi-tech is an East-German era rotary dial phone. So the situation when I tasted this rum was kinda interesting, and allowed me to dispense with any preconceived notions and just tell you what it was like to drink. Short version? It isn’t half bad, and just a step removed from superlative.

Before all that, let’s speak briefly about the company. L’Esprit is a French bottler and distributor based in Rennes, in the Brittany province of France. They do all the usual importation and distribution of old favourites from old countries (or islands) which we know better, but have also branched out into independent bottlings from all over the map – Barbados, Guyana, Panama, Guadeloupe, Nicaragua and so on, all uncoloured, unmessed-with, unadded-to. (A more comprehensive biography is available).

This is a column still cane juice product. Bottled at 47.7%, the rum (I’ll call it that, even though, y’know, it confuses me, and it may actually be a rhum….or not) was light yellow, one of 198 from the single cask, and matured between 1999 and 2012 in an ex-bourbon barrel: it’s a hair over thirteen years old. It’s not, strictly speaking, an original – Bruichladdich (Renegade) and Cadenhead have both issued rums from Epris before. Epris, for what it’s worth, is a distillery located just outside São Paolo in Brazil, and they apparently also distill for Bacardi (as usual, their website is massively uninformative on their product lines). 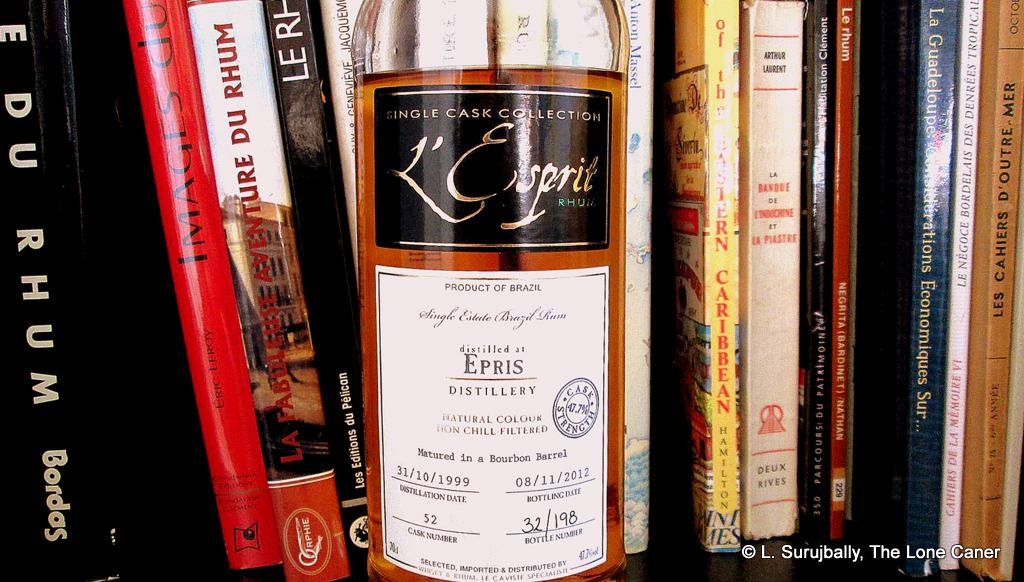 Brazil may be something of an afterthought for L’Esprit (or not). Doesn’t matter. It’s great. There’s very little that’s wrong with the spirit, and much that they got absolutely right. Consider first the aroma: Vegetal, sweet and easy to sniff, quite warm. Initial notes of cardboard, creamy nougat touched with some lemon zest. There was a musty kind of background here, like dried hay in a sunlit field, but also the clean, crisp sweetness of a good Riesling. After a while additional notes of peaches, soft ripe mangos, green grapes and then the slight tartness of soursop, ginnips and green apples came to the fore. Really cool stuff, honestly.

That slight lip-puckering tartness didn’t go away on the taste either, which I think was a good thing. It was oily and pleasant, a little fuller than the light yellow colour might have implied, and was both a little sweet and a little briny at the same time. The vegetal hay-like notes (complete with dusty dry hints) stayed along for the ride, with citrus emerging gradually from the background. Somehow the rum managed to balance both the creamier tastes of brie and toblerone with sharper citrus and soursop into a melange I quite enjoyed. With water these tastes came into fuller focus, but I can’t pretend anything new or more original came out, except perhaps some smokiness and well-oiled leather.

The finish was also quite excellent – somehow L’Esprit managed to dampen down the sharper and more acidic citrus notes, and allow the deeper, fruitier closing aromas (plus a last surprising licorice hint) to take their turn on the stage in a fade of medium length which closed things off just right. All in all, it was just sweet enough, just strong enough, just fruity enough, just salty enough; and displayed a quality to both delight and impress.

Clearing away the dishes, then, the rum had real character and originality, and I enjoyed it a lot – it was one of those samples that has sent me running around looking for more. I think that agricole aficionados would greatly enjoy it, and even traditional molasses rum lovers would have little to complain about here – L’Esprit have found an intersection of heavy and light, warm and sharp, fruity and tart aspects here, that left me admiring as hell, wondering if I shouldn’t get more into Brazilian products. In reviewing the Ron Veroes Anejo, I said of it that it should have had more edge, more oomph, more complexity, more daring. Here’s an example of the rum about which I was thinking.