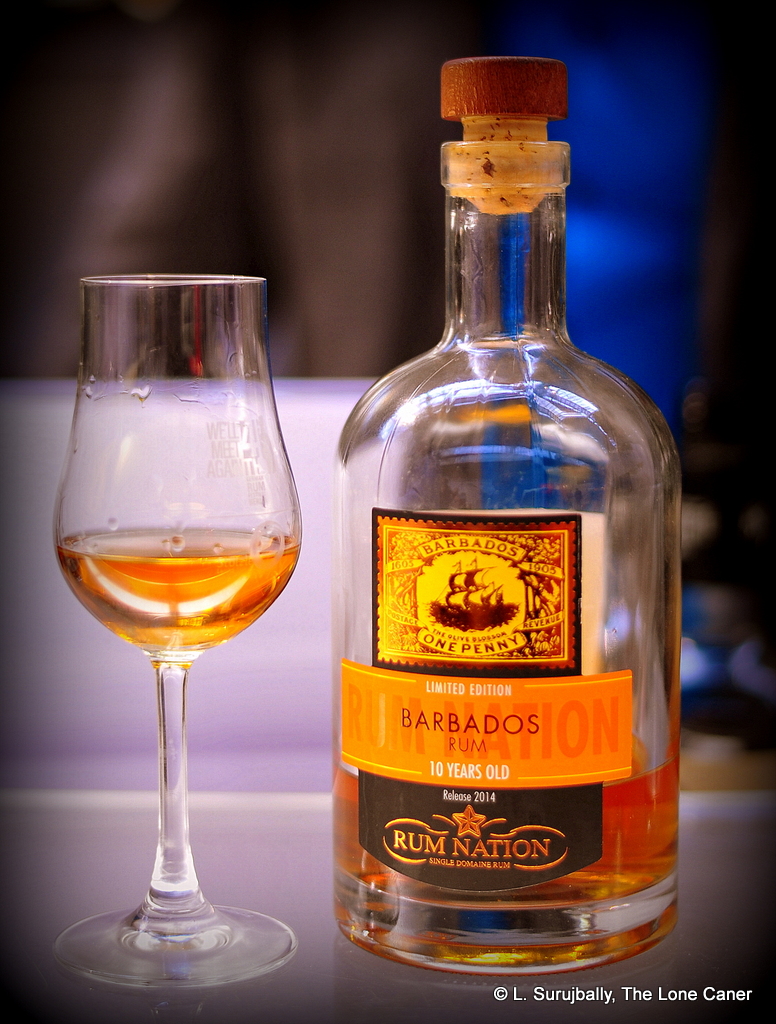 Sweet enough to appeal, smooth enough to enjoy, complex enough to admire. Solid, succulent Bajan rum from 2003, a cut above the ordinary, just like its 2001 brother.

Why Fabio Rossi, the gentleman behind Rum Nation, keeps referring to his Bajan offerings as “entry level” is beyond me. ‘Cause like Mr. Gump, I may not be a smart man, but I know what entry level is. This is a few notches higher, and that it can do what it does with what for me is a relative anemic 40% strength, is no mean achievement in a pantheon dominated by R.L. Seale, Mount Gay, Cockspur and St. Nicholas Abbey.

That said, it does lack some of that distinctive complexity of character that would make me rank it higher. Consider first the nose of the orange-brown rum: like many of Rum Nation’s products there is that olfactory sense of sinking into the soft ease of a plush chesterfield, with which which any consumer of Barbados rums would be quite happy. Bananas, brown sugar and taffy, some crushed hazelnuts, almonds, and an odd spray of cough drops stealing through the back end (cough drops?…I tried again, and yes, that’s what it nosed like).

To taste, that depth of lushness continued, though the rum presented as a somewhat lighter, even “Spanish” style of mouthfeel. It moved away from the brown sugar and caramel, and provided initial flavours of smoke and vanillas that the oak had imparted; yet also more sweetness and smoothness here, like running our spoon through a ripe papaya. Some kick of not-quite-ripe apricots, a bit of green grape, kiwi fruit, aromatic pipe tobacco, a bit of dry must…overall, a very unaggressive, quite friendly rum, extremely accessible. The finish was not too shabby for a standard strength rum: shorter than I might have wished for, but still impressively redolent of caramel, burnt sugar and smoky notes.

You could mix the rum, I suppose, though with something this easy-going, I question why. It has few of the jagged edges that a cocktail might seek to smoothen out, or enhance. I think it’s fine to have neat – its strength (or lack thereof) makes that no chore at all. In any case, Rum Nation has never really hewed to the elemental brutality of full proof rums issued by the Scots, or Velier, or Samaroli. They strike me as closer in philosophy to Plantation, with their finishing strategy, dosage. and slightly more voluptuous profiles. In that sense, to me, it is better than the rum many use as their Bajan baseline, the Mount Gay XO, and for sure I enjoyed it more than the Cockspur 12. It actually has more in common with some of FourSquare’s rums, but that’s just me.

According to Mr. Rossi, the rum is derived from Barbados molasses distilled in a column still, aged in American oak barrels in the Caribbean — no mention where, I suppose we can assume also in Barbados — before being shipped off to be finished for 18-24 months in Italy, in ex-Spanish brandy casks before bottling. As a point of interest, unlike the 2001 RN Barbados 10 year old, this rum did not come from the West Indies Refinery, though you’d be hard pressed to put the two side by side, taste them blind, and know which was which. Although not eplicitly mentioned anywhere, I was told that it was from Mount Gay.

Like Plantation, Rum Nation has been catching some flak recently for adding sugar to their rums. I guess people are having some difficulty marrying the generally positive reviews out there (mine among them) with the mere suggestion of saccharine inclusion. Now I acknowledge the influence that sugar has in making this rum what it is (and that’s not a negative opinion), but am also aware this is a deliberate choice to create the final product, not to make a silk purse out of a sow’s ear, or deliberately tart up and obscure an inferior piece of crap – I’ve spent too much money on, and sampled too many of, RN’s rums, old and young, to believe that for a moment.

In any event, I can tell you that here Rum Nation has produced an affordable, pleasant and drinkable spirit, one I enjoyed thoroughly and would happily buy again. I may ultimately prefer my high-end aged agricoles and full proof twenty-plus year old taste-bombs, but that is no reason not to give this softer, younger Bajan a whirl. Even if you believe, as its maker does, that it’s “just an entry level rum.”

Because that it isn’t, not really.