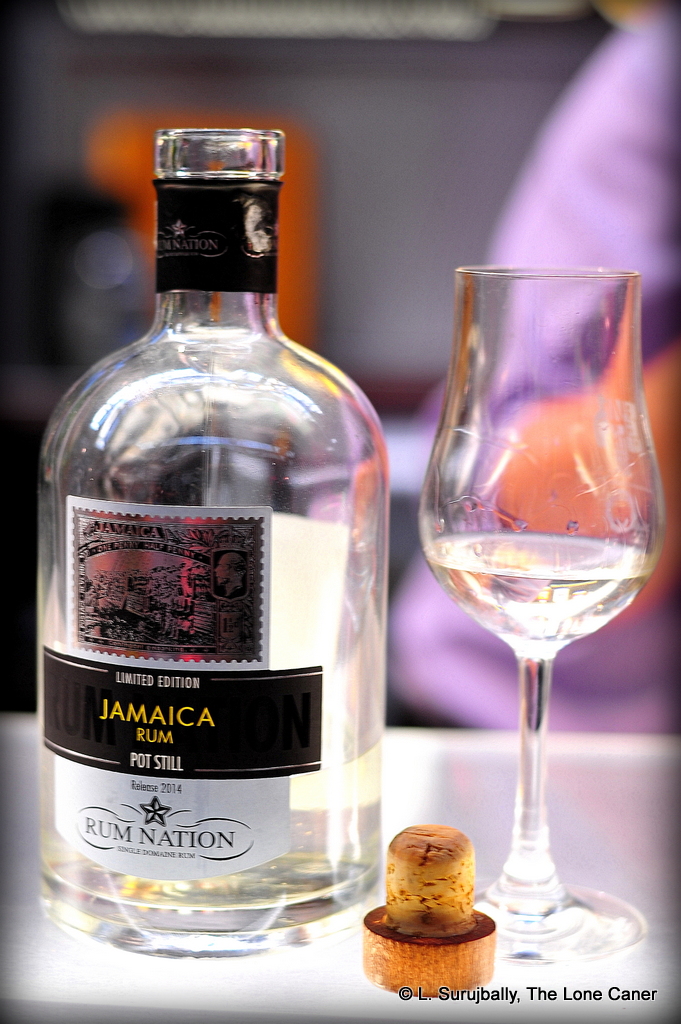 The 57% pot still Jamaican rum from Rum Nation represents a departure for the company in a number of ways (not including the bottle shape, introduced for the 2014 season). It is the first rum the company has produced that is over 100 proof, it’s the first rum they’ve not aged at all, and it is the first white rum they’ve ever made. Long accepting that the Supreme Lord series from Jamaica is one of their best made rums, I was intrigued to see where this one was coming from, and what it was like. Though if experience has taught me anything, it’s that any white full- or over-proof rum should be approached with some caution…no matter who makes it.

Presentation was fine: cork, plastic tipped, solid, all good. I liked RN’s new fat squat bottle with broad shoulders, and appreciated the simple label design (always loved those British Empire stamps – I used to collect them in my boyhood, much as Fabio did). And in the bottle, that clear liquid so reminiscent of DDL’s Superior High Wine, J. Wray’s white overproof, or any local white lightning made for the backdam workers, innocent looking, inviting…and appropriately well-endowed. I can just see the boys in Trenchtown (or my father’s friends in Lombard Street) sipping this neat in cheap plastic tumblers, calling for a bowl ‘ice, the dominos and taking the rest of the week off.

This rum was absolutely in a class of its own, for good and ill. It snarled. It growled on the nose, as if it had been stuffed with diced sleeping leopards; it packed a solid punch, even on the initial sniff. Yes I’d been on a full proof bender for some time, but this rum’s nasal profile was something way out to lunch. It was so…full. Full of grass, lemon peel, fresh sap bleeding from a mango tree. It didn’t stop there, but opened into tar, licorice, cinnamon…and then did a radical left turn and dived into the smells of aniseed oil, fresh furniture polish…even glue, like an UHU stick. I mean…wtf?

At 57% you could expect it to be strong, spicy, peppery…and it was. Sweet, too (I wasn’t expecting that). The mouthfeel was remarkable, not entirely smooth, yet not a blast of sandpaper either – in fact, rather pleasant in its own way, if you factor out the proofage, and heavier bodied than you’d have any right to expect. Cinnamon, crushed leaves, that wood polish again, followed by a briny note akin to black olives, and the scent of a capadulla vine bleeding watery sap. As for the fade: excellent, long lasting, flavourful – it was the gift that kept on giving, with closing notes of green tea and glue and unripe bananas. This is a rum that you absolutely should try on its own just to see how nutso a pot still rum can be when a maker lets the esters go off the reservation. I mean, I drank it at the RumFest and bottles trembled on their shelves and drinkers’ sphincters clenched involuntarily. The rum is badass to a fault. 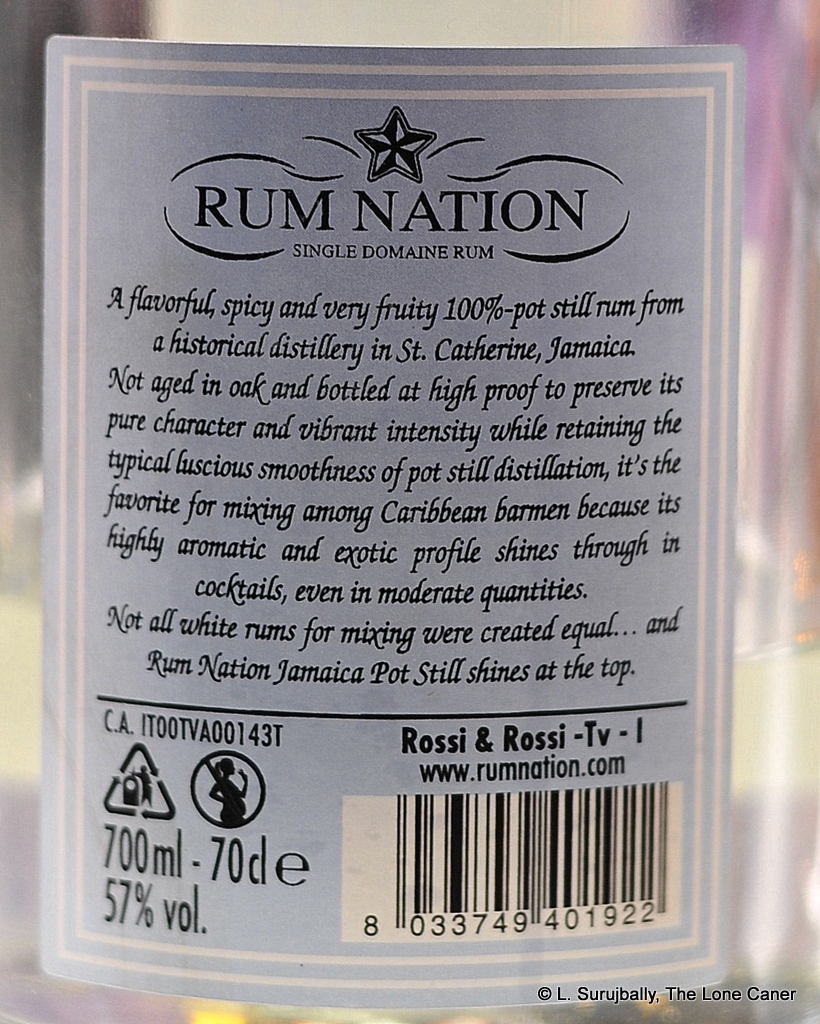 The thing is, for all its eccentricity, the thing is damned well made. I liked it a lot. I always got the impression that in the main, white rums – the really strong ones, the 151s, not the tame Bacardi mixers and their ilk – are really lesser efforts, indifferently tossed off by their makers in between more serious work, and often not widely or aggressively marketed internationally, known more to barkeeps than barflies. Rum Nation in contrast, and judging by this one, took the same time to develop this rum as they have in many of their other products, and with the same seriousness. That’s what makes the difference, I believe, and why I score it rather well. For that and the sheer uniqueness, the chutzpah, the daring of it.

So, summing up, then: a shudderingly original piece of work from La Casa di Rossi. A set of strong, clear tastes and scents. It’s a white, clear, savage, full proof which is redolent of new furniture and fresh chopped cane, and which can be drunk on its own without inflicting permanent damage. I think we should appreciate this one. Because the Jamaica Pot Still is an absolute riot of a drink — a rum to have when you want something that marries the sumptuousness of Italian art to the braddar fun-loving insouciance of a West Indian at a really good, and very loud, bottom-house party.