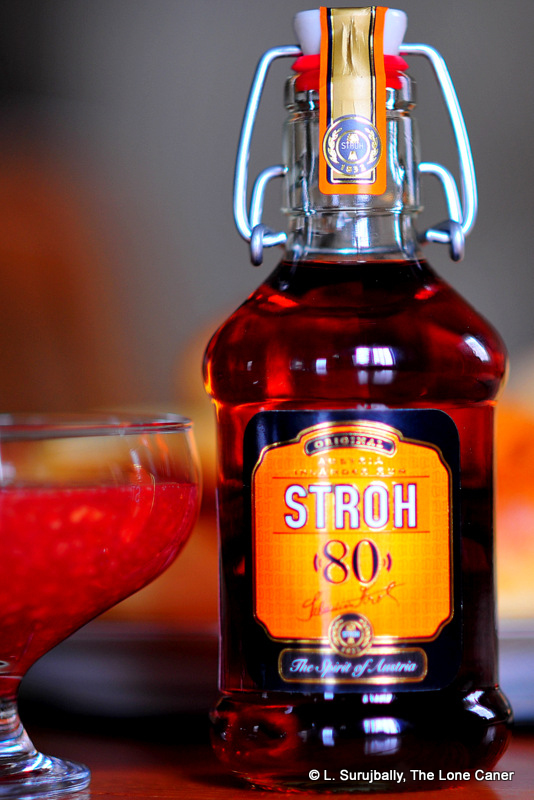 A spiced Rumzilla. Interesting taste, lacking the cheer and laughter of the 151 proofers, and has nothing of the insane charm of the SMWS Longpond 81.2%

Few “rums” scare me like the Stroh 80 does. It’s like a Tuzemak on steroids, with much of the same obscurely vegetal and spiced choice of flavour profile, boosted by the resident blast bunny to a massive 160 proof that’s as comfortable on the nose and tongue as a prostate exam given by Captain Hook. Stroh’s drone-delivered plastique of an overproof has always has been, to me, as self-aggrandizing as the suicide wings served with waivers I have to sign at my local bar. It is an absurdly large proof driving a rum that is to sophisticated tippling as a sledgehammer is to stone-carving — a tool way too crude to do anything more than destroy everything in its path.

It fails as a sipping rum of course, entirely because of its strength (even though that’s is how I had to try it). In fact, some argue it fails as a rum period, because it’s not made directly from sugar cane juice or molasses. Mixing this rum is not only recommended, but encouraged, because if you have it by itself, it’s a bit like choosing a triple espresso instead of a single latte. It makes your drink just a shade … savage.

The Stroh 80 is a spiced, unaged spirit and not a spiced, aged rum – therein lies something of my disdain for it as a rum. One could reasonably ask what’s the difference, my response being that a rum is not made from sugar beets (as Stroh is reputed to be), is aged (even if only for a year), and Stroh’s lacks anything of the character all rums possess. I mean, observe the nose – after the initial blast of characteristic overproof plastique and plasticine and rubberized fumes dissipate and you recover some of your sanity (and find your nose again), what you’ll get is not caramel or burnt sugar or anything remotely resembling what you may be used to – but cinnamon, root beer, ginger and christmas cake spices, wrapped up in a hellacious burn.

And on the palate, it’s so strong it’s like getting a tattoo done on your tongue with a rusty set of needles by a guy who’s already high on this stuff. Your tongue will numb and turn into pterodactyl hide on the spot and your throat will feel it’s been savaged by a velociraptor. Sure you’ll get strong, amazingly intense sensations of black tea, ginger snaps, Tanti Merle’s christmas spices, some dried fruit (raisins and cherries for the most part), and a blast of cinnamon off the scale. It’s also oddly buttery, creamy, which is kind of interesting, and unusual. You may enjoy this. But at end, the titanic nature of the drink just overwhelms: as I also noted in the SMWS Longpond 9 year old, 160 proof is simply excessive and serves no sane purpose beyond bragging rights (though the Sunset Very Strong 84.5% seemed to have found a way to work around that). The finish is about all I find truly epic, because, like with all overproofs, it’s the gift that keeps on giving, and is surprisingly pain free (perhaps because I had already completed my writhing pain dance and had nothing left to scream about) – it’s heated and so long that one sip did me for ages. I kept thinking I’d been pilfering Santa’s cookies an hour later.

Stroh is an Austrian spirit, made by the Klagenfurt company since 1832, and available in variations ranging from 38% through to 80%. It was probably made from sugar beets deriving from an ethanol base to which spices were added because Austria-Hungary had no tropical colonies of its own to provide the raw stock. I’ve read that currently they use sugar-cane derived ethanol, yet when I was doing the Stroh 54 review some time back, I was advised by a reader that it’s still sugar beet based, so there may be some clarification required here. In any event, Stroh is sold as such and meant primarily as a cocktail ingredient to make Flaming B-52s, jagertee, traditional Austrian pastries, and other strong punches where some oomph is required. And of course, it’s great for chest puffing exercises by all Austrians.

What do I think on balance? Well, I sure wouldn’t drink this sucker neat for anything except to write this review: it could be weaponized with too little additional effort. On the other hand, I do like that creamy, spiced up profile for its uniqueness, yes; and the finish is biblical. And to be fair, Stroh’s is quite clear that they don’t make this as a sipping, er, rum. But if you’re feeling like you need to impress the fraulein over in the ecke, and try drinking it that way, be warned: Stroh 80 really does dislike you, does not want to be taken solo, and it will hurt you. My recommendation is simply to leave it in the punch bowl for which it was made, and not risk damage to your liver by guzzling it on its own.