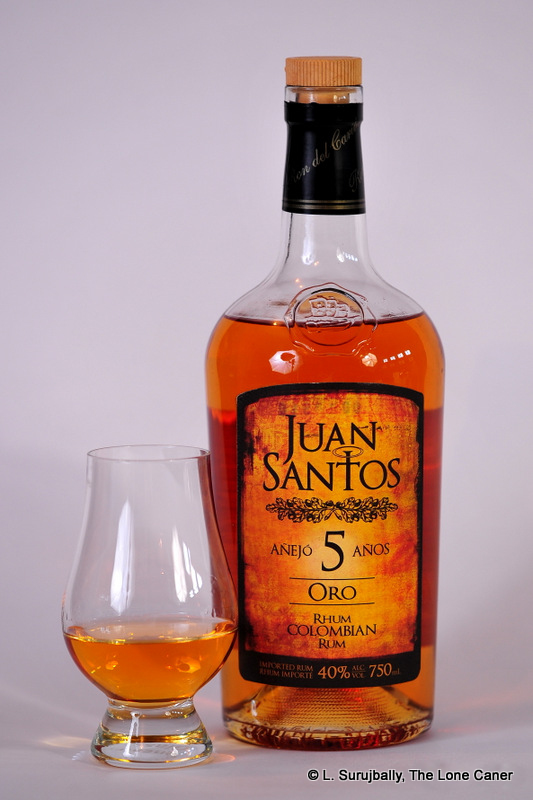 Too light for a five year old, and almost too delicate to be a rum at all.

It says a lot for my collection and where I store it that occasionally, in pawing around searching for a possible Friday night sundowner, I run across a bottle I forgot was there and which is not even opened, let alone reviewed. Such is the case with the Juan Santos 5 year old, which is the last of the Colombian rums from this lineup yet to be addressed (the others are the Café, the 9 year old, 12 and 21).

Five year old rums can be considered as good introductions to a maker’s rum range, because they are not cheap mixing blends that have an indifference to their ageing bordering on the contemptuous. On the contrary, they are aged for the requisite five years, some care is taken in the blend of fives that make the final product, and they serve as useful, low-level introductions to the better rums up the scale (though some argue that they are in many cases excellent and even better rums in and of themselves, more so than the pricier products). Think of five year olds, then, as the spiritous equivalent of a decently tricked-out Toyota Corolla…it’s cheap, it’s reliable, it works well, it’s extremely versatile, and you can go up or down the value chain from there.

The flip side of this last comparison is that a Corolla is, let’s face it, just a bit bland. There’s no oomph to the thing, no exhilarating who’s-your-Daddy-now moment. The Juan Santos 5 was a bit like that, and if you doubt me, just nose the hay-coloured, medium bodied spirit. There is almost nothing here to be analyzed at all, and when I did so four or five times, the scents were so light that about all I could pick out were traces of vanilla, faint burnt sugar notes, and the barest hint of cinnamon. The upper ranges of the this line shared similar issues, yet in those there was a sense of underlying structural complexity where firmness of taste had not been eviscerated as much, and that presented in the sort of fine noses which this one seems to be still searching for.

On the palate things weren’t redeemed much: the lightness of the medium bodied rum noted above carried over into the general mouthfeel — which, while gentle and almost soft with just the faintest bite of youth to it, gave practically nothing back to the taster. Citrus zest, the same sly vanilla hint, and barely a trace of what one might loosely term a “rum profile.” It presented some briny notes at the end, but my contention is, so what? The rum faded well and long, was a bit heated and spicy, with that salty trace persisting, but again, no new tastes or sensations emerged even at this last stage of the game, beyond those already identified.

I confess to being disappointed. It was too bland to be a sipper, too tame, too difficult to tease tastes from, and while mouthfeel and fade were good, the lack of clear complex flavours sink this baby for me as a sipper. So, can it be a decent mixer? Well, maybe – whatever additional ingredients are added had better be the equivalent of pastel shades, because clear and strong cocktail additions would shred the subtle tastes the rum does have. A cola would probably terminate the poor thing with extreme prejudice.

I’m going to give this rum 74 points, primarily for aspects which I think are cool and work well (relative smoothness, good fade, lovely mouthfeel for something so young are high points). But given the quality of other members of the food chain – five year old rums in general and older members of the Juan Santos line in particular – to me that’s damning it with faint praise. I went in really wanting to praise the Juan Santos Five (not least because I loved its older relatives), but alas, stayed only long enough to bury it.

Juan Santos rums are produced by Santana Liquors out of Baranquilla, a free trade seaport zone in the north of Colombia, on the Caribbean Sea. The company also makes various brands for other markets, like the somewhat better-known La Hechicera and Ron Santero labels (Ron Santero is the US brand name for Juan Santos, the latter of which is only sold in Canada). Their website and Forbes notes that they started operations in 1994 when their founders – assumed to be the Riascos business family – brought over some rum makers from Cuba, and an article in el Tiempo notes they are the only family owned (private) rum company in Colombia — all others are apparently part of the Colombian government monopoly.

However, it does not appear that they are actually in the business of distilling themselves, not are they primary producers of anything. They have no sugar cane fields, nor a refinery nor a distillery – at least not that they promote on their own materials and company websites – unless it is the winery they also own and operate, which is where their barrels of rum are aged. What they do, appears to be to act as third party blenders, much as Banks DIH does in Guyana. La Hechicera, their companion brand now distributed by Pernod Ricard who bought a stake in 2021, is often spoken about in rum circles as sourcing barrels and stocks of rum from around South America and then blending and bottling them in Colombia as “Colombian” rums. But they certainly don’t make anything of their own on a distillery.

As an additional note, Juan Santos rums no longer appear to be available in primary markets and online web shops – it has been almost a decade since I sourced mine, so sometime in the mid-2010s I suspect it may have been discontinued.