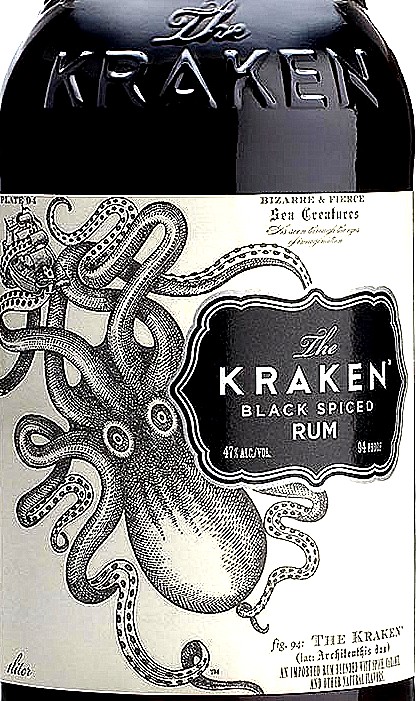 Kraken Black — the selection for the June 2010 Book Club session — is a victory of advertising over the reality of what it is, of style over substance for those who are ok with it, a low-to-middling value (~$28 Can) wrapped up in a presentation that would have you believe the price is an undiscovered steal. A lot of people are going to drink this thing, wax loquacious at the spice, admire the darkness and say “wow!” I’m afraid, though, that’s just knee-jerk, because you take Kraken apart, and it just can’t live up to the hype.

Fair is fair: I liked the bottle, and the presentation was cool. I enjoyed seeing a rum with the stones to put a mythological creature that’s created to do a Godzilla on ancient Greece right there front and center. The small handles I thought were affectations, but hearkened back to old seafaring days, so what the hell: points for that. Points also for that inky black swirling rum which is by far the darkest I’ve ever seen, and therefore for sheer originality, this rum sitting on a shelf is sure to get your attention.

The rum sits in the glass and soaks up the light, letting just some dark brownish red glints through – decent middling legs, nothing special. It’s a blend, this one, a new addition to the market (Proximo Spirits from NY, which also markets Matusalem, distributes this), and bottled at 94 proof…47% ABV. And it supposedly has something like eighteen different spices added to it.

The nose is problematic – caramel had to be added to get the colour this dark and that comes through, but so does, vanilla and toffee and chocolate…and a medicinal odour remniscent of cough medicine that is both jarring and unwelcome, and no, I do not attribute it to the 47%. Even a Glencairn glass the Hippie provided could not save the schnozz from being skewered by that hospital reek.

The taste is better. The caramel is not dominating, and lets other flavours like licorice, cinnamon and maybe nutmeg through, but for the most part all I got is a musky cloying taste of too much molasses left in (and that weird chocolate texture) that destroyed the fine balance a spiced rum needs. But I must make note of this: for a 47% rum, it’s damned smooth going down, and so I think a lot of people are going to love this rum in spite of the cough medicine taste that persists and just ruins the whole thing for me. The finish goes on for longer than expected (a definite plus) but what it does is permit the very things you don’t like to persist.

My suspicions are that with the recent resurgence of interest and popularity in quality rums, a lot of lesser wares are flooding the market in an effort to mine the vein. Nothing else explains why so many American and Canadian companies are buying all these Caribbean raw stocks and blending and distributing the results themselves (not always to the benefit of our palates, alas). When Bruichladdich, Cadenhead or A.D. Rattray put their resources and acknowledged street cred behind a rum, I’ll acknowledge the effort and result, but I can’t yet give the same cachet to the (supposedly Angostura-owned) Lawrenceburg distillery in Indiana, sorry.

So I’ve said it fails for me, but fails as what? As a sipper or a mixer? As a sipper, yes but not by as much as you’d think: it’s smooth enough and intriguing enough – cough syrup crap taste aside — for me to not to mark it below the Young’s Old Sam, or Bundie or the Coruba: though none of these has pretensions to grandeur the way the Kraken does, and if you doubt me, just compare the websites and the forum chatter among all these. As a mixer I have to be more careful – remember, the purpose of the mix is to either fill the weaknesses of the rum, enhance the diluter, or create a synthesis of rum and additive(s) which is greater (and weaker) than the sum of its parts. Put like that, this rum shows its dichotomy and in trying to be both cocktail and sipper, pleases neither. It’s too spiced, too medicinal – too cloying – to work well as a mixer, for coke, ginger ale or others.

And so my recommendation would simply echo old Zeus, call in Harryhausen, and issue the command to (what else?) — release the Kraken.