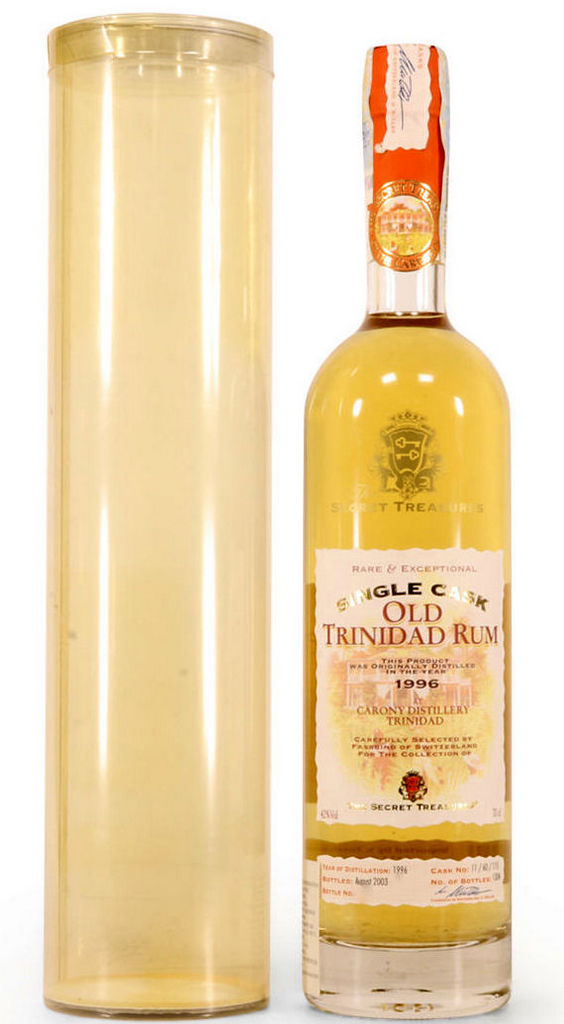 In the maelstrom of ongoing indie releases coming at us from every direction almost every month, it’s easy to overlook some of the older rums, or even some of the older companies. Secret Treasures is one of these — I had discovered their charms on the same trip where I found the first Veliers, all those long years ago, at a time when the concept of independent bottlers was a relatively small scale phenomenon. Back then I bought the company’s Enmore 1989, and both Grandma Caner and I liked it so much we polished off the thing in under a week, and started looking around for more.

Over the years I bought a few others, got a few samples and reviewed the few I scored, and then ownership changed. The last rums Haromex (the new distributor) put out the door before they changed the ethos of the brand was the twin St Lucian John Dore and Vendome pot still rums in 2014 and subsequent releases were radically different. The company and the Secret Treasures brand has faded from view since then, and few consider their rums great finds (when they consider them at all) as other, newer indies jostle for the place it once held (for a more complete historical picture, see below)

This is where I’m supposed to make some nostalgic Old Fart kind of comment where I wax rhapsodic about the long forgotten and unappreciated rums of yore, undisovered steals and diamonds in the rough which weren’t appreciated at the time by the aggressive young rum pros of today, blah blah blah. Unfortunately, that’s not the case here. The rum – a Caroni, one of a few released – fell unaccountably short of the high bar set by Velier and other independents, and remains a forgotten, forgettable curiosity, noted more for the associated name than any intrinsic quality it possesses itself.

Let’s do the tasting, then, to demonstrate why somehow this thing falls down flat. The nose gives a promising indicator of things to come, but which don’t. It immediately reeks of the characteristic petrol, tar and road asphalt in hot weather which so defines Caroni. It is dry and sere and surprisingly hot for a near-standard-proofed rum (42% ABV), dark and with notes of sugar water, rubber, acetones, fruits – unripe red cherries and strawberries, pears and ripe green apples. There is also a touch of vanilla and light molasses, but nothing strong or overpowering. 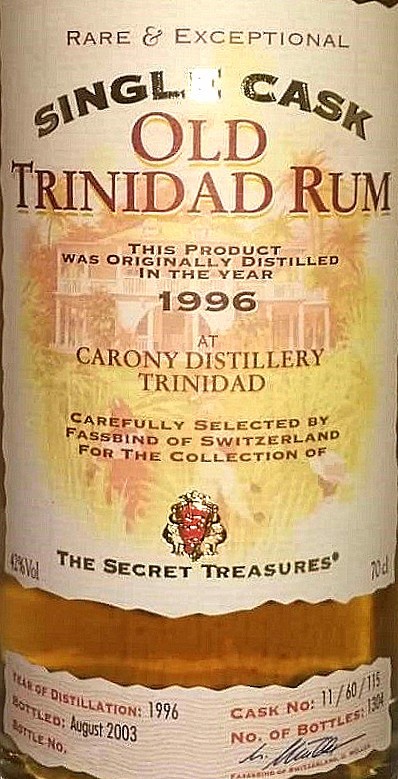 A salty sweet sugar water greets the tongue with warmth and firmness. All the fleshy and watery fruits we’re familiar with parade around – pears, watermelons, white guavas, papaya, kiwi fruits, even cucumbers all take a bow. A trace of olives and occasional whiff of strawberries and petrol are barely noticeable, so one can only wonder where, after such a promising beginning, they all vanished to. Eloped, maybe. Certainly they bailed and left the rum with nothing but memories and a good wish to lead to its inevitably disappointing denouement, which was short, breathy, light and watery, and barely registered some vanilla, brine, a fruit or two and exactly zero points of distinction.

Secret Treasures did put out a few really exceptional rums — their lack of marketing, lack of visibility and lack of distribution mostly relegated them to obscurity (the Enmore 1989 mentioned above is a case in point) — and as is usually the case with small volume bottlers, the outturn of the original line was somewhat hit or miss, and not everything they bottled was gold. This Trini rum was something of a waste of time, for example, weak, unfocused, undistinguished, practically anonymous. Oh it was a rum all right, identifiable as a Caroni, just not much of one. Perhaps it should have been left in the barrels a few more years. Many more years. And then finished in sherry casks. And then spiced up. Then it might have had a profile I’d actually notice. But then again, maybe not.

Initially Secret Treasures was the brand of a Swiss concern called Fassbind SA (SA stands for Société Anonyme, the equivalent to PLC – the wesbite is at www.Fassbind.ch) — who had been in the spirits business since 1846 when when Gottfried I. Fassbind founded the “Alte Urschwyzer” distillery in Oberarth to make eau de vie (a schnapps). He was a descendant of Dutch coopers who had emigrated to Switzerland in the 13th century and thus laid the foundation for what remains Switzerland’s oldest distillery.

They make grappa, schnapps and other spirits and branched out into rums in the early 2000s but not as a producer: in the usual fashion, rums at that time were sourced, aged at the origin distillery (it is unclear whether this is still happening in 2021), and then shipped to Switzerland for dilution with Swiss spring water to drinking strength (no other inclusions). In that way they conformed to the principles of many of the modern indies.

Fassbind’s local distribution was acquired in 2014 by Best Taste Trading GMBH, a Swiss distributor, yet they seem to have walked away from the rum side of the business, as the company website makes mention of the rum line at all. Current labels on newer editions of the Secret Treasures line refers to a German liquor distribution company called Haromex as the bottler, which some further digging shows as acquiring the Secret Treasures brand name back in 2005: perhaps Fassbind or Best Taste Trading had no interest in the indie bottling operation and sold it off as neither Swiss concern has any of the branded bottles in their portfolio.

Certainly the business has changed: there are no more of the pale yellow labels and sourced single barrel expressions as I found back in 2012. Now Secret Treasures is all standard strength anonymous blends like aged “Caribbean” and “South American” rum, a completely new bottle design and the Haromex logo prominently displayed with the words “Product of Germany” on the label. 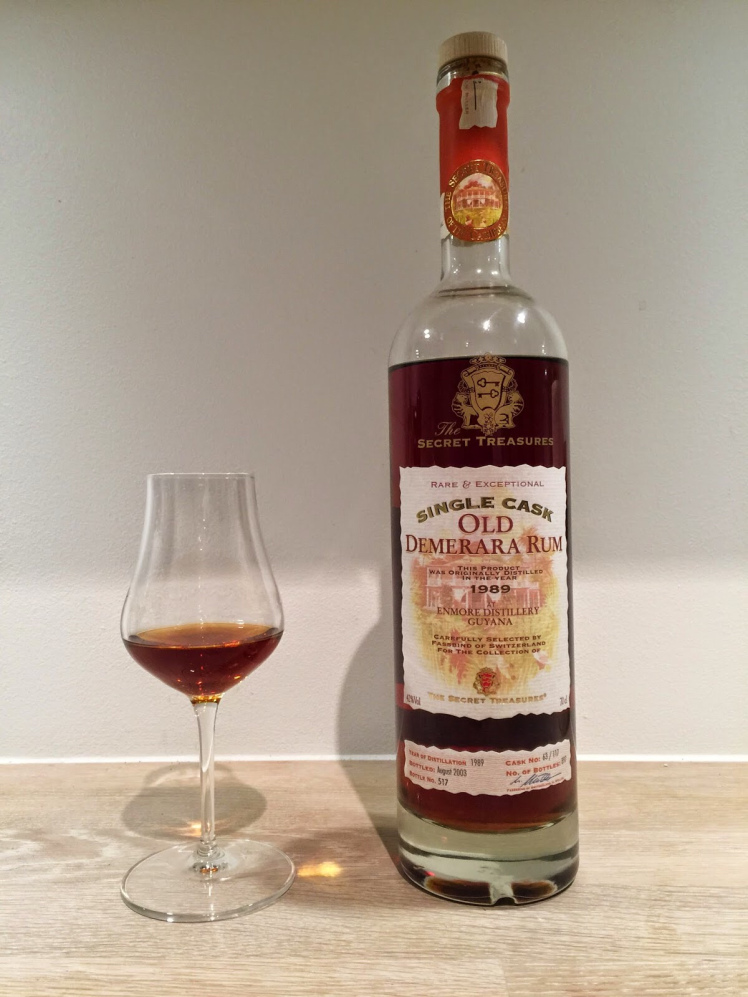