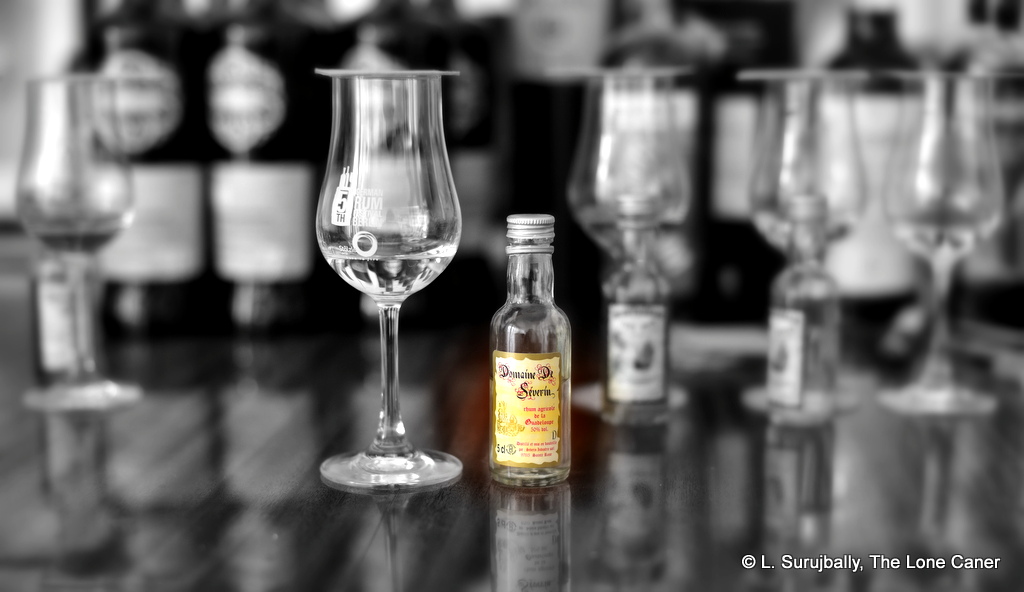 As noted in the biography of the Domaine de Séverin, what we’re getting now from the new owners is not what we were getting before. The company’s distillery changed hands in 2014 and such rums as were made back in the day immediately became “old”, and more obsolete with very passing year. From the old style design of the labels, I’d hazard that this one came from the 1990s, or at the very latest, the early 2000s, and I have no background on ageing or lack thereof – I would imagine that if it slept at all, it was a year or less. Over and beyond that, it’s a decent blanc, if not particularly earth shattering. 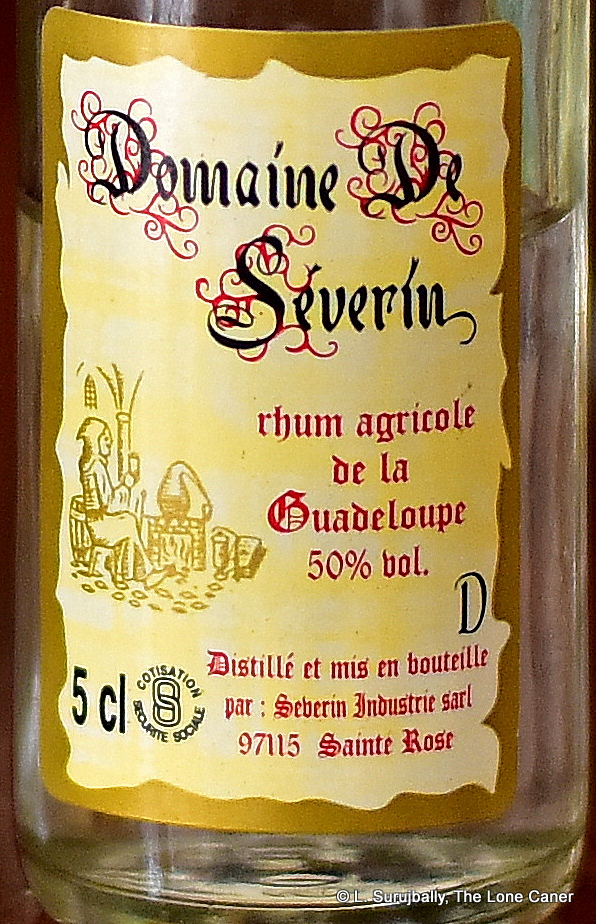 Nose – Starts off with plastic, rubber and acetones, which speak to its (supposed) unaged nature; then it flexes its cane-juice-glutes and coughs up a line of sweet water, bright notes of grass, sugar cane sap, brine and sweetish red olives. It’s oily, smooth and pungent, with delicate background notes of dill and cilantro lurking in the background. And some soda pop.

Palate – The rhum does something of a right turn from expectations. Dry and dusty, briny and sweet. Vegetable soup and maggie cubes mixes up with herbal / fruity notes of cucumber, dill, watermelon juice and sugar water. Somehow this crazy mish-mash sort of works. Even the vague hint of caramel, molasses and lime leaves at the back end add to the pungency, with the dustiness of old cardboard being the only off note that doesn’t belong.

Finish – Warm, smooth, light, oily, a mix of sugar water and 7-up which is the faintest bit dry.

Thoughts – Guadeloupe is free to mess around with molasses or cane juice, not subscribing to the AOC that governs so much of Martinique, and the bottle states it is a rhum agricole, implying cane juice origins. Maybe, though those odd commingling tastes do make me wonder about that. It’s tasty enough and at 50% almost exactly strong enough. But somehow, through some odd alchemy of taste and preference, the odd and uncoordinated way the sweet and salt run apart from each other instead of providing mutual support, it’s not really my glass of juice.

Séverin is a small distillery in the north of the left “wing” of Guadeloupe (called Basseterre), whose history can be divided into three parts: 1800-1928 when different owners held the small estate and grew various agricultural crops like pineapples and sugar, 1928-2014 when the Marsolle family held it and created the marque of Domaine de Séverin for their rhums, and the post-2014 period when the distillery (but not the whole estate) was sold to a local businessman called Jose Pirbakas. Although there was a cessation of operations after the takeover due to differences in management and operational philosophies (for one thing, all rhum prices were jacked up by 45% in 2014), rhums from Séverin are now once again available, primarily in France, and sporting a new, redesigned bottle and label.

That label is key, since the older ones such as on the bottle I had, are no longer in use and therefore serve as a useful determinant as to whether one is buying a pre-takeover rum (which is a Rumaniacs candidate), or a post 2014 version, which is not.

While it is not explicitly stated on the label, the Vieux is about three years old. Séverin have always played around with different casks in their aged rhums (cognac for the most part), but in this case it is very likely that standard oak barrels were used to age the rhum, which itself derives from a creole column still.

Nose – Clearly Séverin, like many producers on Guadeloupe, played around with both molasses and cane juice for its raw material. Here, the deeper aromas of molasses, coca-cola and nougat steer us towards molasses as the base. There were hints of cinnamon and light coffee grounds, some smoke and vanilla, quite easy-going but also reasonably aromatic.

Palate – A very pleasing profile, if not quite as sharply distinct as anything you’re getting from Martinique with its strict AOC guidelines. Coke, molasses, bitter chocolate and nougat charge out from the gate. There is also some brine, olives and coffee, and coiling around in the background are some vague floral and light fruity notes which provide a pleasing backdrop for the heavier flavours

Thoughts – Reminds me somewhat of rums from Mauritius or the Seychelles. I like these indeterminate products that steer an interesting line between a pure molasses product and one made from juice – it’s like they take a bit of the characteristics both without leaning to either side too much. That makes them good rums to drink, though this one is not so exceptional that I’d want it on my top shelf. Still, it was made recently enough that I suspect one can still find it, and if so, it’s worth picking up for more than just historical value.