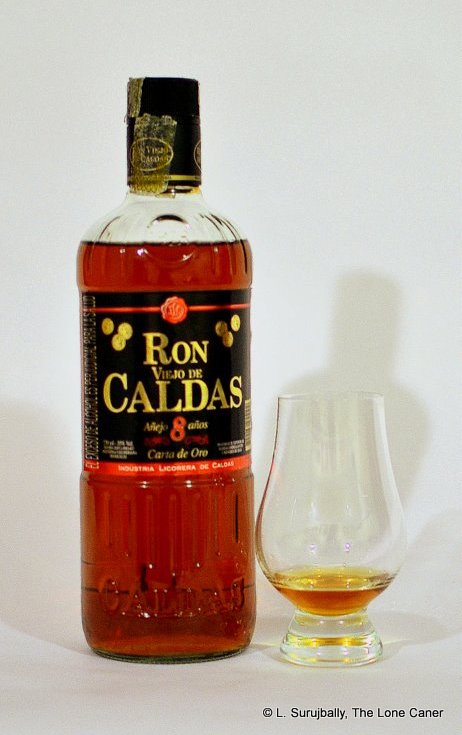 A low proof rum that is impressive right out of the gate, suggests quality and subtlety past compare, and then gives up and runs full tilt into the wall. What this rum might have been with some extra strength….

Right off the bat I have to state my preferences: I am not a fan of underproofs. They have a fake air of smoothness that has less to do with a blender’s art than with a low alcohol content. Spirit imparts depth and character to a rum (as I have observed with overproofs from time to time), and the lack thereof forces the distiller all too often to make up for the shortfall with additives.

With the Colombian Ron Viejo de Caldas 8 anos (bottled at 35% according to the label), however, I may have to revise this assumption, since not only did the Colombianos age this for eight years as if in defiance of all conventions for a rum less than 40%, but the thing is actually quite a decent drink which, because of its relative weakness, can be had as is without embellishment. I can’t say this makes me an instant convert…but it does make me less of a detractor.

Ron Viejo de Caldas is made by the Industria Licorera de Caldas from Colombia. It started small, as a little known artesinal rum from the provinces, but clever marketing and its own quality have made it a more internationally known brand than heretofore. It was created by a Cuban Don Ramón Badia at the behest of the Caldas Fine Perfume and Rum company in 1926 (not as unusal as it may sound, since a good nose is key to both) and in 1959, boosted by good sales, a distillery was set up; in 2009, the company produced 25 million bottles of various rums. Nowadays, the brand is produced in Manizales, the provincial capital of Caldas, 7,200 feet above sea level. Located in the shadow of the Nevado del Ruiz volcano, the distillery is now equipped with column stills and sources its sugar cane syrup from the Cauca River Valley, where sugar cane is cultivated all year round.

On the nose the first impression one gets is a kind of supple fruitiness: peaches, citrus, nectarines and maybe a ripe mango or two. Raisins and cinnamon and maybe nutmeg can barely be made out. The aroma is rich and deep and actually reminds me a bit of a good bourbon, or a rye (just a sweeter one). And upon opening up, the brown sugar notes start to dominate in a very pleasant burnt sugar I always love.

The dark copper liquid has a pleasantly heavy body, and is smooth and a shade sere: there is less sugar and and molasses on the taste than the nose suggested, and this might be because the rum is not made from molasses, but from sugar cane syrup. The ageing in bourbon barrels certainly left its mark in a slight woodsy note at the back end, and this was not unpleasant, just distinctive…a bit of character added to the gene pool, so to speak

The fade might be the weakest part of the rum, and this is where the low alcohol content shows its true colours and abandons your snoot — just as you expect a lingering smooch from what you may have thought was a lovely undiscovered gem you alone have sampled, it…disappears. No seriously. It has one of the shortest finishes of any rum I’ve ever had, and that’s something of the character that’s missing along with the true 40% or greater ABV content.

All things considered, I just don’t get why this rum had to be an underproof at all (unless I got a variant that’s not commonly exported). It has a lovely body, a terrific nose, a good tart and tasty palate, and then, just like Dick Francis’s horse all those years ago, it just falls flat on its belly and skids to a sudden sharp stop without explanation or apology. The 40% variation I did not have won a bronze medal in 2007 and a gold in the 2009 Ministry of Rum tasting competition for premium rums, but fellas, all I can say is that good as that may make it, ensure you check the label for the proof before you buy this in a duty free shop someplace, or you might be a little disappointed

I’m giving this baby 77 points on the strength of its great opening act, and had it not been for the weak conclusion, it would surely have topped 80. It reminds me of unadorned rums, subtle, complex and not too burdened with noticeable additives of any kind. I just wish I knew what the real forty percenter was like – on the strength of this one, it must be quite something.