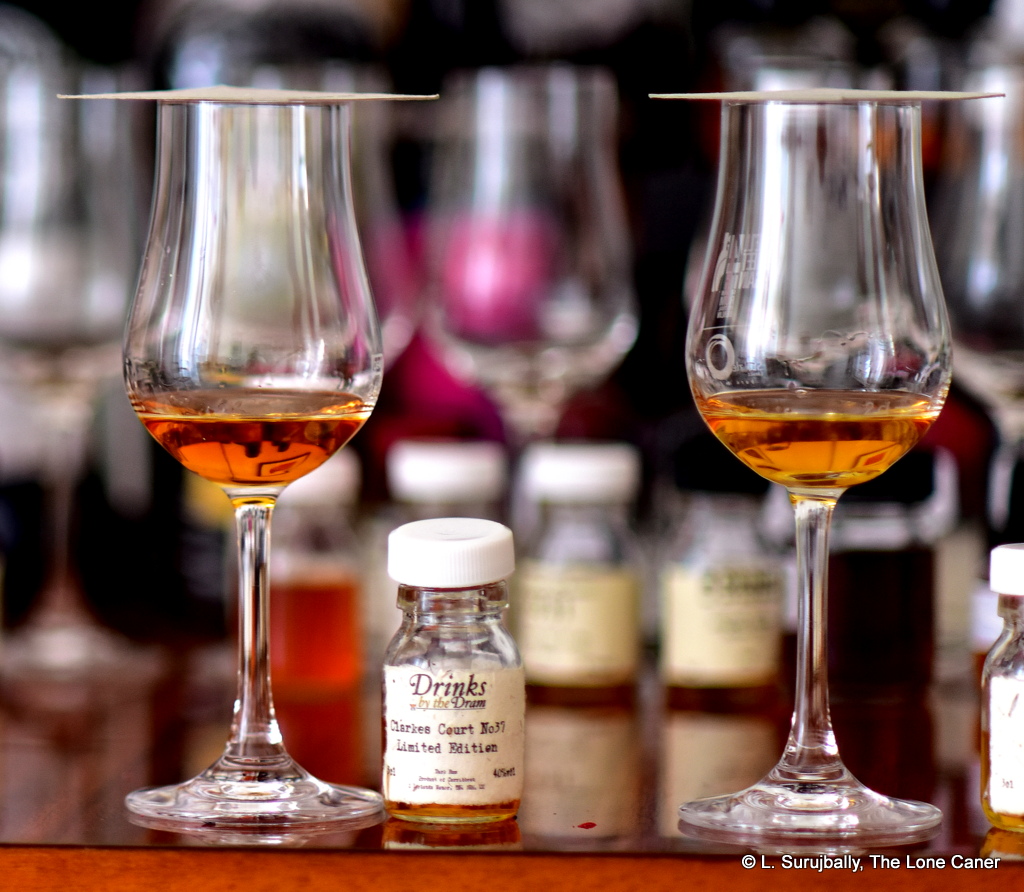 The Masters of Malt blurb for the Grenada-distilled Clarke’s Court No. 37 rum contains two sentences that make one both smile and ask more questions. A “blended Caribbean rum” which is “the thirteenth limited release rum from Clarke’s Court.” And as if trying to top that, they go on to say “The rum was designed to be supplied to exclusive social events” and both just reek of some marketing intern making ad copy in his sleep, evidently unable to come up with anything more interesting about this equally lackadaisical rum.

Why not a “Grenadian” rum, one wonders. And, if this is the 13th edition, why is it called No. 37? Is it related to the possible year of establishment of Grenada Distillers Ltd? Unlikely, because the 1998 book Grenada: Island of Conflict by George Brizan notes that as being 1936, though admittedly the Clarke’s own website notes the factory as becoming operational in 1937. An anniversary of independence? But that was 1974 so 37 years later would be 2011. Dave Russell of the Rum Gallery probably nailed it when he said it was issued to commemorate independence, and the 300th year of establishment of St. George’s (not strictly right – it was started much earlier – but the star-shaped Fort Royale, later St George’s, was indeed completed in 1710).

Where are the other 12 editions, then? Or No. 1 through No. 36? No records exist. Further research reveals that it’s a blend, released in 2010 and was aged for 8 years in oak barrels, and with current editions of the No. 37 blend also being released at 12 years of age. The Ultimate Rum Guide remarks it was married and then rebarreled with more fruit flavour infused (oh oh…) but this is backed up nowhere else except in hydrometer tests, which also point to additives. Lastly, while the Fat Rum Pirate noted his assumption as being a pot and column still blend, His High Wonkiness says there’s only a two-column still at Grenada Distillers, with which they occasionally make some heavier rum from plates lower down in the column and mix that into the lighter stuff from plates higher up. 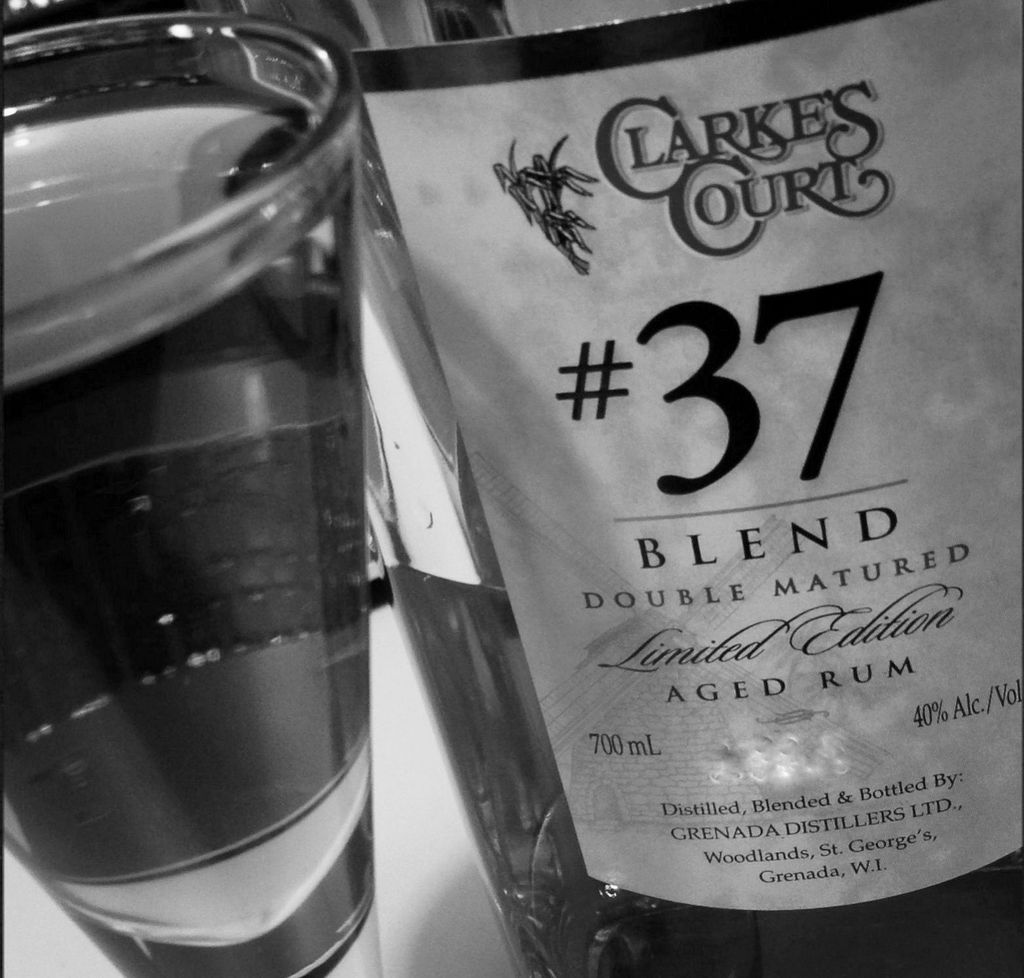 It’s a good thing I did this research after I did the tasting, because all these questions and backstories that filled in the sadly lacking label and website info, came later, and didn’t influence my initial opinion. Alas, that opinion wasn’t all that terrific either. Which is odd in itself, because the experience started out quite solid – the nose, for example, was warm, a little spicy, and smelled initially of molasses bubble gum and soda pop. Quite sweet smelling, and got deeper than the above might imply or the strength would suggest. Nice tropical fruit basket too – guavas (the red ones), bananas, mangoes, watermelon, gherkins, plus toblerone white, almonds. Nicely creamy. Some soft salty notes, like dates and figs. Creme brulee and caramel. Irish coffee. So…nice.

It’s on the palate that it sinks, and some of the falsity shines through. Weak and wispy to a fault. Bubble gum and fanta. Light citrus, pears, more mangoes and guavas, but oddly muted, as if they aren’t sure they’re supposed to be here (this is usually a good indicator of tampering). White chocolate, crushed almonds, a hint of nutmeg, nuts, vanilla, some salt caramel ice cream. There’s even some light fresh (and I swear I’m not making this up) laundry detergent kinda taste. Overall, just unimpressive, with a finish that has to knock twice to make sure it’s heard, let alone noticed, and gives little beyond some miscellaneous fruits and a bit of tart yoghurt to let us know it was ever even there.

It’s a peculiarity of the rum that it said it was limited, but never actually how limited – the label has a bottle number, but not a “…out of xxx bottles” statement. So it’s hard to say what’s special or limited about the whole thing, especially as it continues to be made to this day and the year of distillation of the bottle one has is not mentioned. Moreover I can almost guarantee that few reading this know anything about it unless they went on a cruise down to the island themselves, or — like me, Chip, Dave and Ed — date back from those days a decade or more back, when the standards for both rums and labels were very much less exacting than they are now and we accepted what we got with gratitude at getting anything at all.

However that was then, and those same easy standards and low strength fail the rum in this day and age. It’s nice enough for the unadventurous and indifferent but in no way is it as premium as it makes out it is. It’s weak, it’s not well assembled, the years it slept actually seem like less, and it’s been added to. Therefore, to me, it’s an average rum of no distinction or special individuality — and so I think I’ll close this already-overlong review by just giving it an average sort of score. 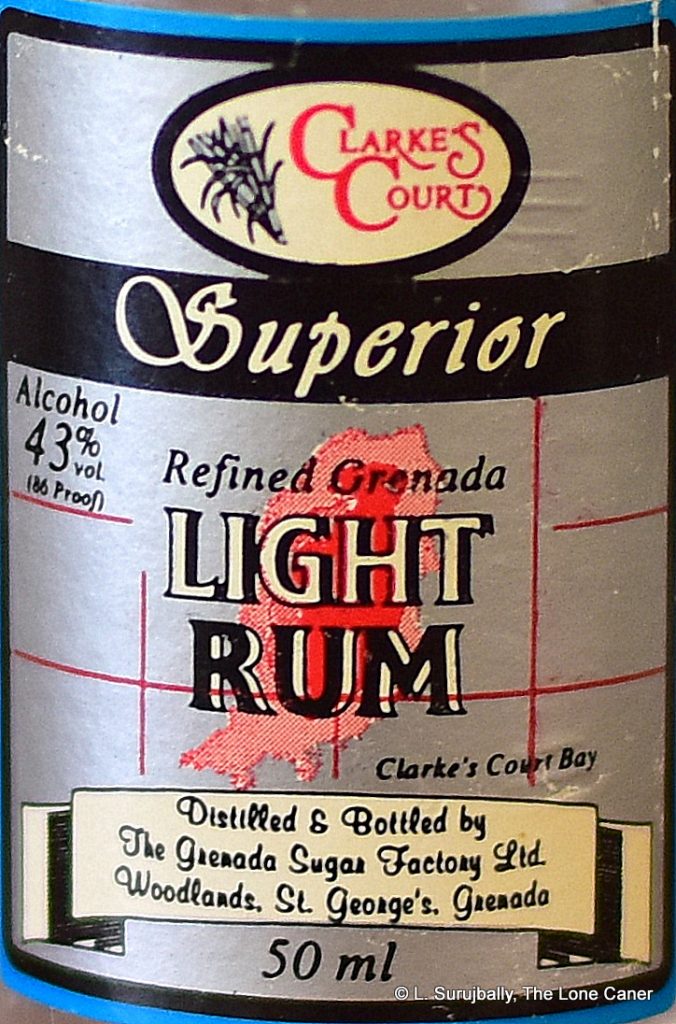 This spite of a light white — to give it its full name, the “Clarke’s Court Superior Refined Grenada Light Rum” – should not be confused with either the current version of the Superior Light being released at 40%, or the best selling and much better Pure White at 69%. The one here is an older version of the rum, column distilled (Ed Hamilton’s 1995 book Rums of the Eastern Caribbean mentions a two-column still in operation around that time), aged for under a year, filtered to clarity and meant as a low level mixer. You could argue that it’s meant to take on the Bacardi Superior with which it shares several characteristics, and perhaps it’s a holdover from the light rum craze of the sixties and seventies when cocktails made with such rums were all the rage.

As always when dealing with rums from even ten years back, there’s a dearth of information about the various iterations over the years and decades, and I lack the resources to go to Grenada and ask in person. Still, given that I bought this as a mini, and part of a single lot of rums dating back at least ten years, the “2000s” range of when it was made appears reasonable — and since there are other, more current 43% Superior Light rums from Clarke’s with Grenada shown as green on the label, it may even pre-date the turn of the century. It’s unlikely that the recipe is seriously different.

Palate – Does something of an about face when tasted – turns slightly oaky, which is odd sicne it’s only been aged for a year or less, and then filtered to nothing afterwards. As with the nose, probably best to wait a little – then some shy nuances of sugar water, apples and pears peek out, accompanied by coconut shavings again, and a touch of raw sugar cane juice.

Thoughts – These kinds of whites are (or were) for easy beachfront sipping in a fruity cocktail of yesteryear, or in a local dive with a bowl of ice and a cheap chaser, to be taken while gettin’ tight in the tropical heat over a loud and ferocious game of dominos. Nowadays of course, there are many other options available, more powerful, more intense, more pungent — and a rum like this is unlikely to be found outside back-country beer-gardens, tourist bars or in an old salt’s collection. I mourn its loss for the lack of information on it, but not for its milquetoast taste. 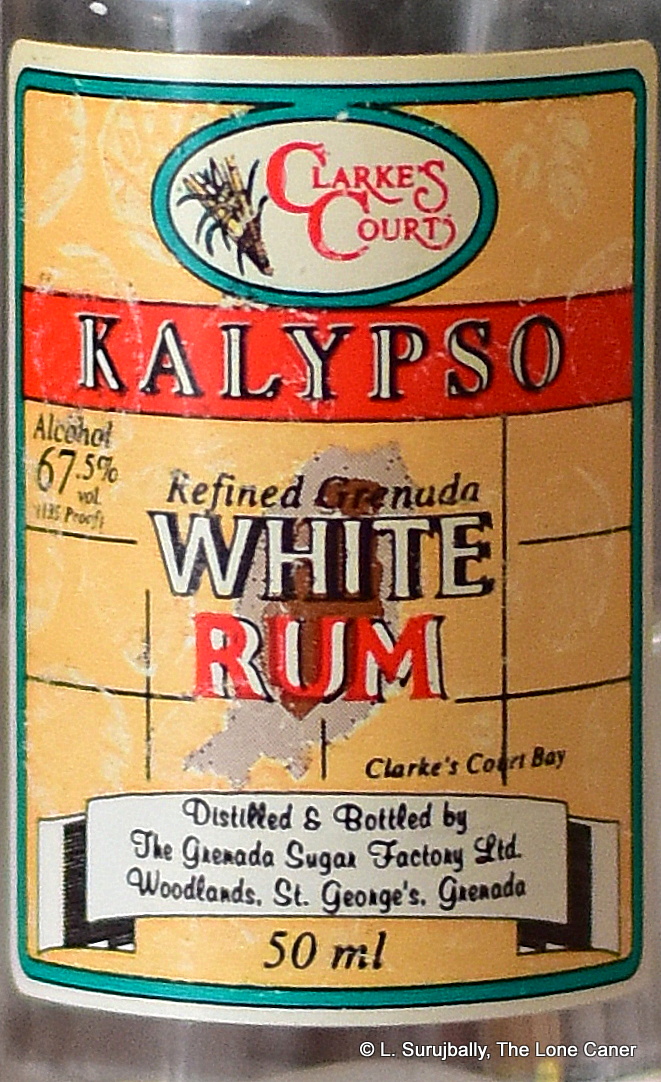 There are three operations making rum in Grenada – Westerhall, Rivers Antoine and Clarke’s Court, the last of which was formed in 1937, operating under the umbrella of the Grenada Sugar Factory (the largest on the island) and named after an estate of the same name in the southern parish of St. George’s. This title in turn derived from two separate sources: Gedney Clarke, who bought the Woodlands estate from the French in the late 1700s, and a bay called “Court Bay” included with the property (this in turn was originally titled “Watering Bay” because of the fresh water springs, but how it came to change to Court is not recorded). The company sold rums with names like Tradewinds and Red Neck before the Clarke’s Court moniker became the standard and I’m still trying to find out when that happened.

References to Kalypso, a 67.5% white overproof, exist until the late 1990s when it was marketed concurrently with the 69% Pure White Rum, but I can find no trace subsequent to that, and the company website makes no mention of it in the current lineup of their rums. So I am assuming (subject to further info becoming available) that the two were similar enough in profile and strength for the production of the Kalypso to be discontinued in favour of the better known and maybe better-selling Pure. The rum is unaged and column still produced (the current distillery was constructed in the 1970s and utilizes a John Dore two-column, continuous-distillation still).

Nose – Sharp and very aggressive, not surprising for that strength. Also quite aromatic – esters, and nail polish, strawberries, pears and sour cream, to begin with. It smells rather lighter than it is, and sweeter than it tastes, which is nice. Leaving it to open up results in additional smells of sugar water, nutmeg and the slight bite of ginger.

Palate – Whew. Pungent is the word to use here. Some plastic and furniture polish, a little brine. Most of all the light clear sweetness from the nose comes through and remains firmly in place – pears, watermelon, white guavas, papayas, with the spiced notes of nutmeg and ginger also remaining in the profile.

Finish – Hot and long lasting of course, no surprises there. Mostly light fruit and some aromatic flowers.

Thoughts – The Kalypso lacks the fierce individualism of pot still whites and really doesn’t class with the same company’s Pure White Rum which is an order of magnitude more pungent. But it’s not bad, and taken with coconut water, bitters, cola or whatever else, it’ll juice up a mix with no problems at all, which is hardly surprising since that’s precisely what it was made for. Too bad it’s no longer available.