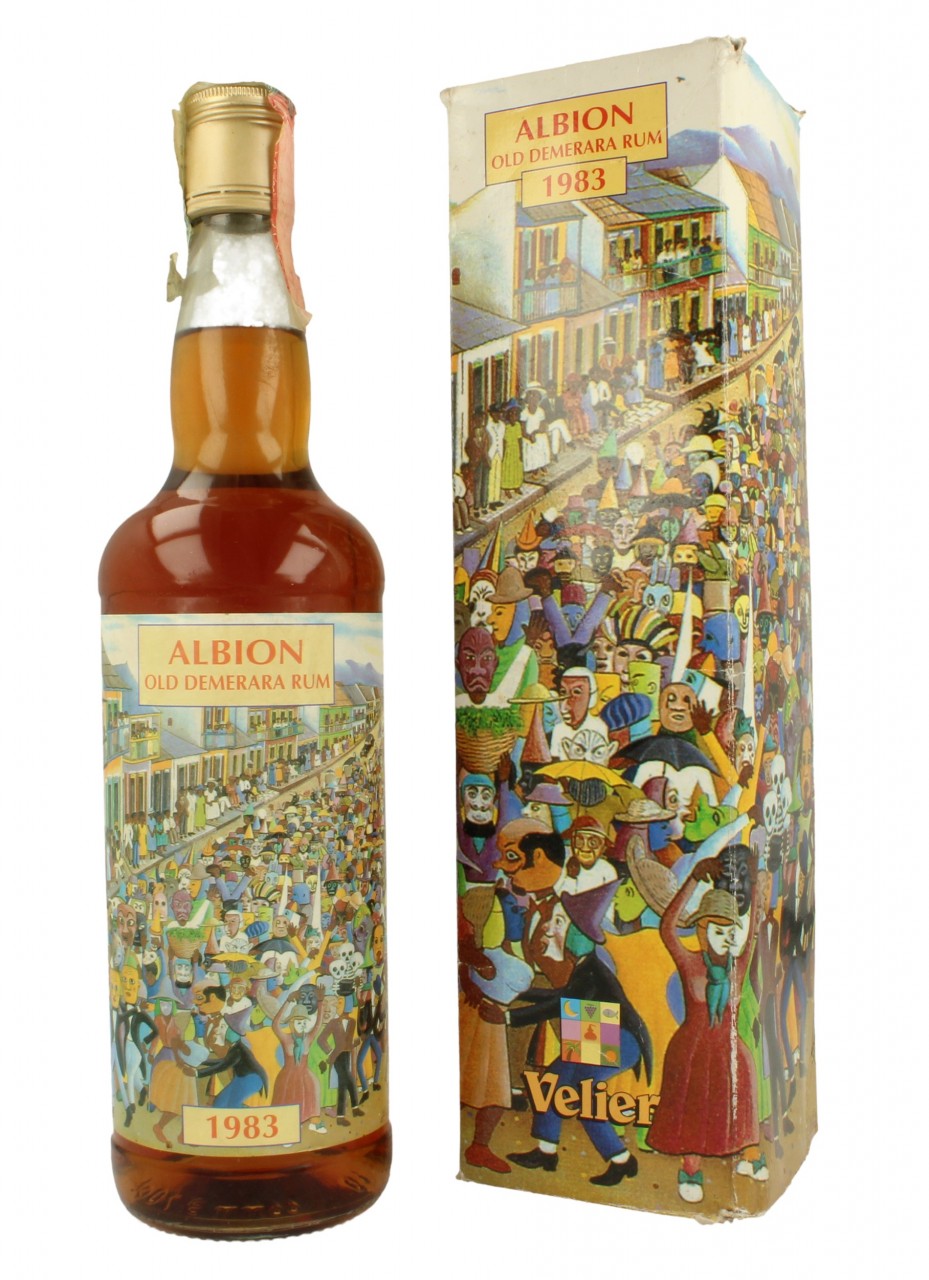 The Velier Albion 1983 bottled at standard strength shares space with others of the original Velier rum lineup bottled by Breitenstein such as the Enmore 1987 and LBI 1985; it comes complete with colorful box which was discontinued some years later, and in tasting it you can see, even from so far back, the ethos of the company’s founder start to shine through…but only faintly. Five casks of origin, no notes on tropical vs continental ageing or the final outturn, sorry. I’d suggest that these days finding one of the original Velier bottlings from nearly twenty years ago is next to impossible, and probably at a price that negates any sense of value it might come with given the paltry ABV…but never mind. Let’s try it, because I love the products of the First Age and history is what we’re after in the series anyway.

Nose – A nose like this makes me gnash my teeth and wish better records had been kept of the various stills that were moved, swapped, cannibalized, dismantled, repaired, tossed around and trashed in Guyana’s long and storied rum history. Maybe a Savalle still or some now disappeared columnar still — certainly not one of the wooden ones. It was a rich, deep Demerara rum kinda smell, presenting with admirable force and clarity even at 40% – butterscotch, a little licorice, nuts, molasses, molasses coated brown sugar. To which, some patience and further snooting will add flowers, squash, pears, cumin and orange peel. Oh, and also some brine and red grapes topped with whipped cream. Yummy.

Palate – Very soft and restrained, no surprise. Some of the nasal complexity seems to fade away … but not as much as I feared. Blancmage, creme brulee, vanilla, caramel toffee, brown bread and herbal cream cheese. Leather and some earthier, muskier tones come forward, bound together by rich brown sugar and molasses, white chocolate and coffee grounds. There’s a little citrus, but dark-red grapes, raisins, prunes and blueberries carry off the Fruit Cup.

Finish – Surprisingly, unexpectedly robust and long lived. The closing aromas of deep dark grapes, burnt sugar, light citrus, licorice, molasses and caramel is not dazzlingly complex, simply delicious and doesn’t try to do too much

Thoughts – A very good forty percenter which showcases what even that strength can accomplish with some imagination and skill; observe the difference between a Doorly’s XO or 12 YO and something like this and you will understand my whinging bout the former’s lack of profile. There’s just so much more going on here and all of it is enjoyable. There’s a 45.7% 25 year old version issued (also from 2003) which I’m dying to try — and of course, the masterful 1986 25 Year Old (R-013) and 1994 17 Year Old, which kicked off my love affair with Veliers — but no matter which one you end up sourcing by bottle or sample, I don’t think you’ll be disappointed.