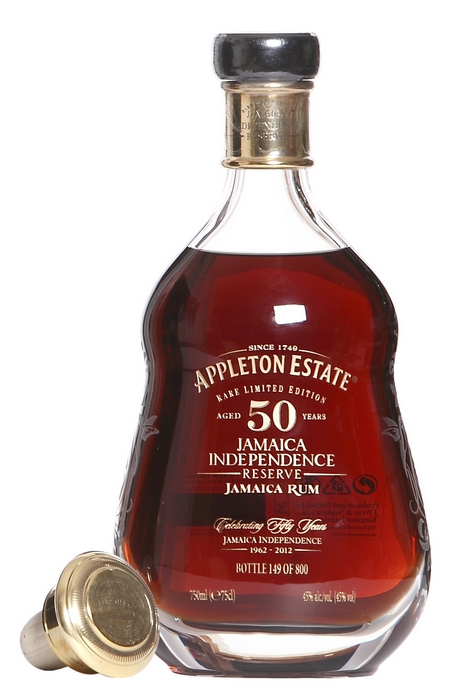 Everyone knows about the 50 year old rum which Appleton pushed out the door a few years ago. Not only because of the age, which they touted as “the oldest rum ever” even though that was patently untrue, but because of the stratospheric price, which even now hovers around the US$4500 mark (give or take). I’m not sure if they still make it — it was specifically commissioned for Jamaica’s 50th anniversary of Independence in 1962, so I suspect it was an 800-bottle one-off halo-issue — but that price alone would make many take a really jaundiced view of the thing. To their detriment, I believe, because having tasted it five times now, I can say with some assurance that it is still one of the very best rums Appleton ever made.

Nose – The smell opens the vault of my memories, of Jamaica, of the stately progression of other Appletons rums over the years, of the times I tried it before. Initial notes of glue, fading fast; then honey (I always remember the honey), eucalyptus oil, toffee, caramel, rich milk chocolate with rye bread and cream cheese, developing slowly into luscious candied oranges, molasses and burnt sugar. Some of that vegetable soup I noted from the 20 year old ceramic jug is here as well, much subdued. What woodiness that exists is amazingly well controlled for something this old (a problem the 30 year old had).

Palate – The dark richness purrs down the throat in a sort of warm, pleasant heat. Burnt brown sugar and wek molasses, caramel, toffee, nougat and nutty toblerone chocolate, a flirt of coffee. More fruits emerge than the nose had hinted at, and provide a pleasing contrast to the more creamy, musky flavours: grapes, bananas, apricots, pineapples. Then cinnamon, more honey, some cheese. Oakiness again well handled, and a sort of leather and smoke brings up the rear. I sometimes wonder how this would taste at 55%, but even at 45%, the rum is so very very good.

Finish – Medium long, a fitting close to the proceedings. Mostly bananas, molasses, a little pineapple, plus a last dollop of caramel. And honey.

Thoughts – Still a wonderful rum to sip and savour. Sadly, too expensive for most. Those who can afford a whole bottle are unlikely to be into the rum world as much as we are, but whoever has it, I hope they’re sharing…generously.