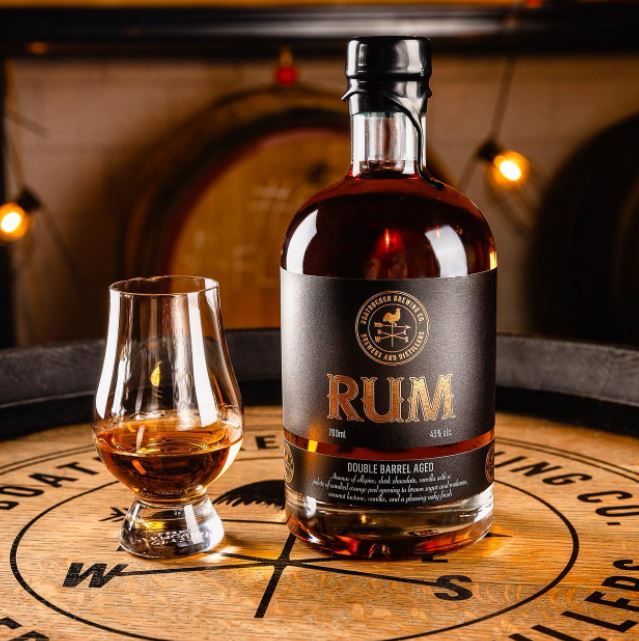 The distillery and brewery called BoatRocker (with what I am sure is representative of a tongue-in-cheek sense of humour shared by many Aussies) is another small family-run outfit located in Melbourne, a mere 50km or so north of JimmyRum. It was officially founded in 2009, and like many other such small enterprises I’ve written about, their genesis is far older: in this case, in the 1980s, when the (then teenaged) founder, Matt Houghton, was enthused by the Michael Jackson (no, not that Michael Jackson) show “The Beer Hunter” – this led to a lifelong love of beer, homebrewing, studies of the subject in University, and even gypsy brewing after graduation, which he and his wife Andrea did while saving pennies for a “real” brewery. In 2012 they acquired property, plant and equipment (as the bean counters like to say), and established their first barrel room and cellar door, all to do with beer.

All this is about the suds, for which they soon gained an enthusiastic following and a good reputation, but where’s the rum, you ask. Well, that’s where things get a little murky and several sources have to be consulted over and above the company webpage. In short, in 2017 Boatrocker merged with a Western Australian gin-and-vodka distillery called Hippocampus — the investing owner of that distillery had taken a 33% share in Boatrocker in 2015 — uprooted that company’s hybrid still “Kylie” and moved lock stock and barrels to Melbourne. This is what is making all the distilled spirits in Boatrocker now, though I get the impression that a separate team is involved. They produce gin (several varieties, of course), whiskey, vodka and two rums (one is spiced). Oddly, there’s no unaged white in the portfolio, but perhaps they made enough money off of existing spirits, so that the need to have a white cane spirit was not seen to be as important. On the other hand, rum may not seem to be the main attraction of the company,

This rum then. For the primary ferment, a rum yeast originally from Jamaica is used. They utilise a dunder/muck pit (also not mentioned on the site), and have cultured many bacteria and wild yeast from the local area, which is continually evolving as they add fresh dunder at the end of each rum run. The esters produced by the yeast and bacteria help provide depth to the base spirit. How long the fermentation goes on for is unknown, but once this process is complete, the rum distillation is done using the aforementioned 450 litre hybrid pot still (with two ten-plate columns) and engaging just the first column and five plates – the juice comes off the still at around 58% ABV, and set to age for about two years in first-use bourbon barrels imported from the USA, with a further year in high-char (#3) American oak barrels. Bottlings is done after dilution to 45% ABV, and there you have it.

So that two-barrel maturation is why they call this rum “Double Barrel”, and indeed it does present an interesting profile, especially how it smells. The aromas are exceptionally rich in comparison to the other standard proof Australians I had on the go that day. It’s like a crisp sweet riesling. Red ripe grapefruit, blood oranges going off; dark chocolate, cherries, plums, raisins, cakes and gingersnaps, eclairs, whipped cream over irish coffee, plus a little salt butter and cinnamon. Really quite a lovely nose.

On the palate the rum feels somewhat thinner and yet also sweeter, than the nose, but retains much of the allure of the way it started out. Honey, coconut shavings, chocolate oranges, Also light fruits, molasses, caramel, vanilla, herbs, crushed almonds and cinnamon, plus (yes, we’re not done yet) a rich key lime pie and brown sugar. There’s a touch of cheesecake, tarts and, nougat here, but in the main, it’s the fruits that have it. It suffers – if the word could be used – from a thin, short, faint but easygoing finish that has mostly vanilla, coconut shavings, light fruits and a touch of that pie again. It is by far the weakest aspect of what is otherwise quite a decent product.

Overall, I liked the nose most of all, but it was a shallow downhill coast to a somewhat one-dimensional conclusion after that. As I have observed before with the Americans and their desire to wring the most out of their stills by producing everything they can on it, I wonder whether the making of all these different things dilutes the clear-eyed focus on rum somewhat (I’m selfish that way) and that’s why the high bar the opening aromas present can’t be maintained. Dunder and muck pits do help make up for shortcomings in this area, however, and this is why the score is incrementally better than other previously-reviewed rums in this age and strength range. Yet I submit that there’s room for improvement, and one day, if they continue along this path, the potential that the Double Barrel rum only suggests right now will become a true reality. I sure hope so.