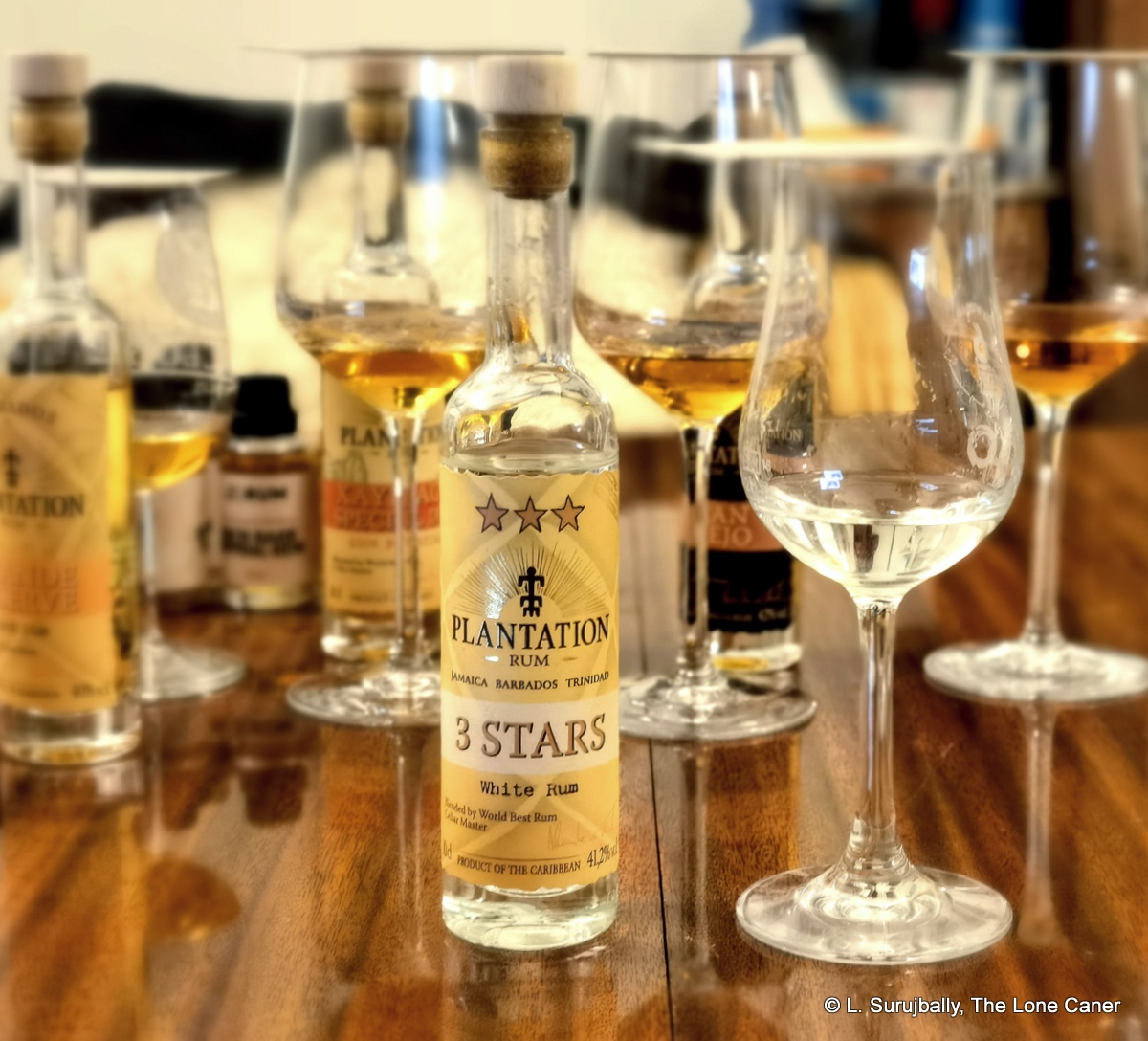 The Plantation 3-Star rum is part of the “bar classics” range of Plantation’s stable, which includes well-regarded rums like the OFTD, Original Dark and Stiggin’s Fancy. Of course the whole “3 star” business is just marketing – it’s meant to symbolize three stars of the Caribbean rumworld whose rums from a part of the blend: Trinidad, Jamaica and Barbados. This conveniently elides the stars of Guyana, Martinique, St. Lucia and many others, but ok, whatever. Ditto for the “World Best Cellar Master” – uh huh. Still, Plantation’s webpage for the rum provides a nice level of detail for those who want more depth on what’s in there: briefly, two of the components hail from Barbados, meaning WIRD (pot and column still) and Trinidad, which is Angostura (column only), but it’s never been clear which Jamaican distillery made their part. Longpond, perhaps, since Ferrand has an association there 1.

Taking it for a spin and trying it, ten years after its initial release — and after deliberately seeking it out — I honestly wondered what the fuss was about and why people kept singing ecstatic hosannas to the thing (when not aggressively pressing me to try it). The nose, for example, struck me as too faint (if reasonably interesting): some vague hints of glue, burnt rubber, smoke, leather, a touch of tar, bananas and ethanol. I had to wait a long time for secondary aromas of pears, white guavas, papaya, and sugar water to emerge, and there wasn’t much of that to speak of here either. It seemed to degenerate into a lightly fruity watery alcohol rather than develop serious chops and character.

The palate was much nicer. It remained delicate and faint, but there was more to work with, somehow. Much of the nose translated over well (usually the reverse is the case, but here it was just…well, firmer). Sweet ethanol flavoured sugar water with a touch of flowers, pears and very ripe yellow thai mangoes. Watermelons and a strawberry infused water. Cane sap, some unsweetened yoghourt and perhaps a green grape or two, but if this thing had any serious Jamaican in here, it was taking a serious step back, because the funk some mentioned wasn’t there for me. There was some shy and retiring hints of nuts, vanilla and aromatic tobacco on the finish, which was nice enough…it’s an easy and reasonably tasty alcoholic shot to pour into whatever mix one has on hand, and can be sipped, I suppose, though it’s a bit too sharp for that, IMHO.

The wider rumiverse’s opinions on the rum vary, either falling into the camp of those who have no problems with a cheap cocktail rum being dosed, or those who do (the latter are usually the same ones who have issues with Plantation for other reasons). Few remark on the taste of the thing, but solely on that basis and ignoring all other aspects of the company, my own feeling is that it’s really not that special. After trying it (twice) I must simply say that while it’s a decent dram, it’s hardly spectacular, and though it got really good scores back at the time it was introduced, to chirp its praises now when so much other, better stuff it out there, is simply unrealistic.