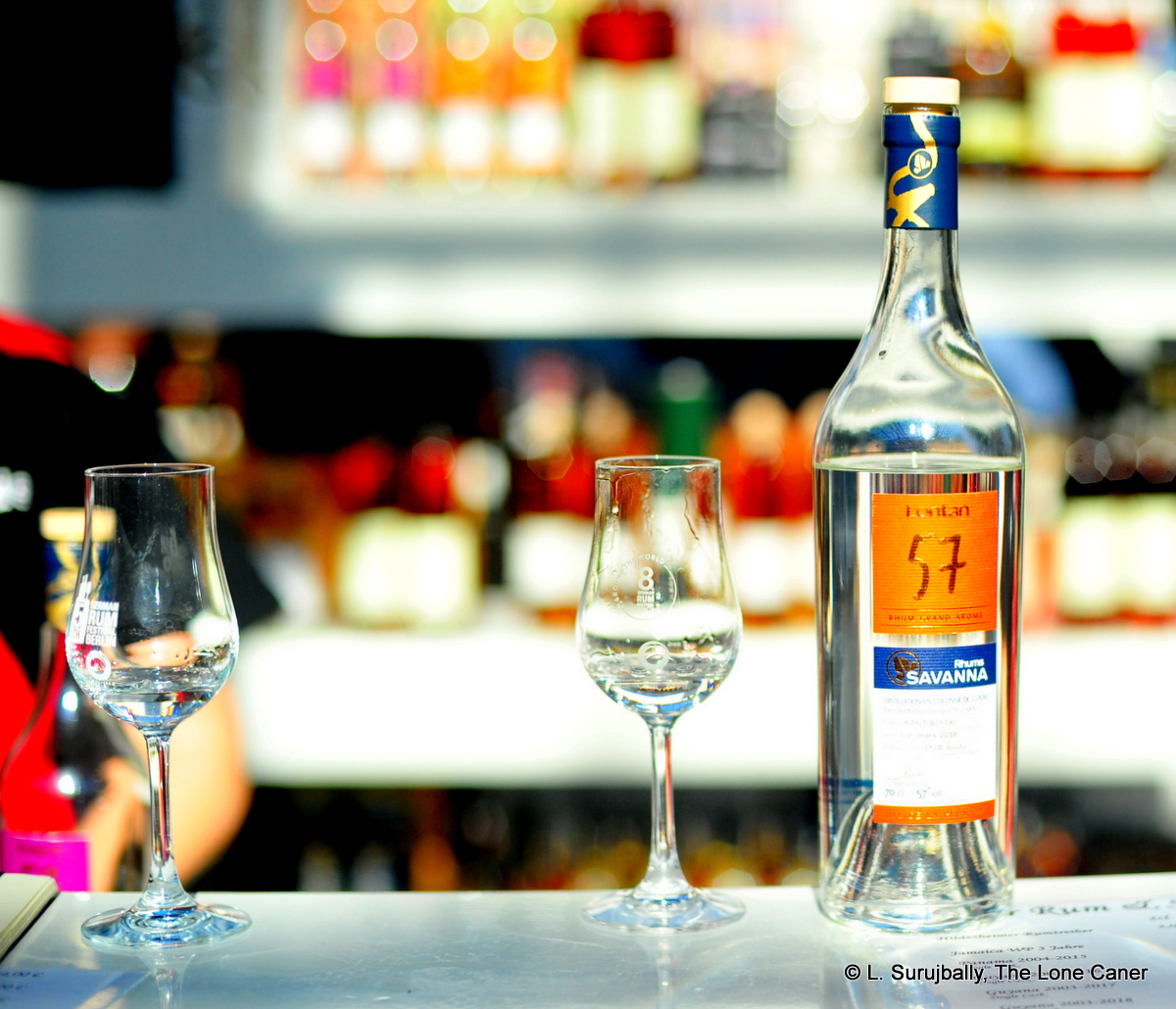 In the previous review I wrote about the Reunion-made Savanna HERR Blanc 57º White Rum (second batch, from 2018), and was surprised and pleased at the reaction it elicited: quite a few comments were made on various platforms, showing a really positive feeling about the rum. Today we will, as promised, go deeper into its brother rum, released in tandem with it each time one was issued, also 57% ABV, and also stuffed to the gills with an ester count that leaves the rum geek crowd with slightly trembling knees, quivering hands and clenching…well, you get my drift.

The “57” series of rums was part of a skunk works project which the Indian ocean island distillery of Savanna initiated back in 2005 where they let their Maître de Chai off the leash without any clear directions beyond “go”. The gentleman took them at their word, messing around with every variable of the production process he could — and what came out the other end was so off the reservation that when management peeled themselves off the floor, found their voices and timorously looked around for buyers, they realized that none existed if they wanted to sell it as a rum. And so the pungent distillate was left to rest in a steel tank for over a decade, until the rise of the New Jamaicans and a renewed appreciation for high ester rums squirting raw funk from every pore showed that yes, there was indeed a market for the thing. The first edition was trotted out in the 2017 festival season, followed by this second one in 2018 with a limited run of 1500 bottles, all issued at 57% ABV (the pot still and column still versions were released concurrently).

The Jamaicans would probably sniff rather tolerantly (if not disdainfully) at an ester count of a “mere” 578.7 g/Hlpa which places the rum somewhere between the odd no-man’s land of Wedderburn (200-300) and Continental Flavoured (700-1600). And they would nod with distantly polite appreciation at a column still distillate generated from an experimental long fermentation of six days. On the face of it, they would hardly worry that their own street cred was in danger of being superseded and just on the basis of the numbers, they’re right.

Except that, not really…because the rum turned out to be really rather good, which is why it and its brothers have become sort of underground rumdork cult classics. Consider the nose: it was intense and sweet and tart, and started off, oddly enough, with an aroma of fresh sawdust and pencil shavings 1, combined with a freshly disinfected hospital room, iodine and pine sol. It morphed to sweet fruit infused water, redolent of watermelons and very light Thai mangoes – there were times it was almost delicate. Bags of strawberries, red grapefruit, bubble gum, kiwi fruits and green apples. Behind all that, there almost seemed to be a sort of whisky finish to the whole thing and overall, what I got was a lot of florals and a lot of fruits, and those easily shouldered aside any other subtle notes.

The palate had an equal quality, though perhaps not as complex. Here the pencil shavings took something of a back seat and just chilled out (maybe they were sulking), leaving some nice florals, ripe apples, lemons, pineapple, strawberries, grapefruit and licorice to carry the show, backed up by some cereal, cardboard and lightly musty tastes of varnish and damp tobacco. The fruitiness of the whole thing was a constant throughout, until it all came to a conclusion in a finish that was long, fruity, tart — almost sour — and just intense enough for government work. Like the 57 HERR, it gained from being left alone to open up, because it didn’t do the old soldier thing and fade away, just gathered its forces and presented as solid and complex even an hour later.

So, a funny thing happened as I was tasting this Lontan 57 – I really liked it. What it lacked was some of the take-no-prisoners machismo of the pot still HERR 57, which seemed to revel in its own puissance (and afforded writers the rare opportunity to use the word “puissance”). That did not, however, mean it didn’t have some of the offbeat notes of Boomerang’s Strangé (or her perfume commercial), just that they were better controlled: it moved easily and elegantly through its paces, had a nice balance and just a few off notes. It shared and showed a similar line of descent with the HERR 57, while at all times being its own thing. This column still, molasses-based rum reminded me somewhat of Haitian clairins, even Mexican charandas, but its closest comparator might actually be another artisanal spirit we don’t get enough of yet, the oddly refined Cabo Verde grogues.

Tasting two 57s from the same year — the HERR and the Lontan — side by side, reveals their differing natures, showcases their differing origins, and the differing ways they were made. It also demonstrates that if you have a maitre de chai who takes “go” to mean “where no-one has gone before,” then with some imagination and cheerful bombast, you can make a really sterling and tasty rum of firmness, originality and serious flavour. Sort of like this one. It’s definitely a rum worth having on the shelf.

Savanna very helpfully classifies its rums using various words which tell the curious what its rums are: