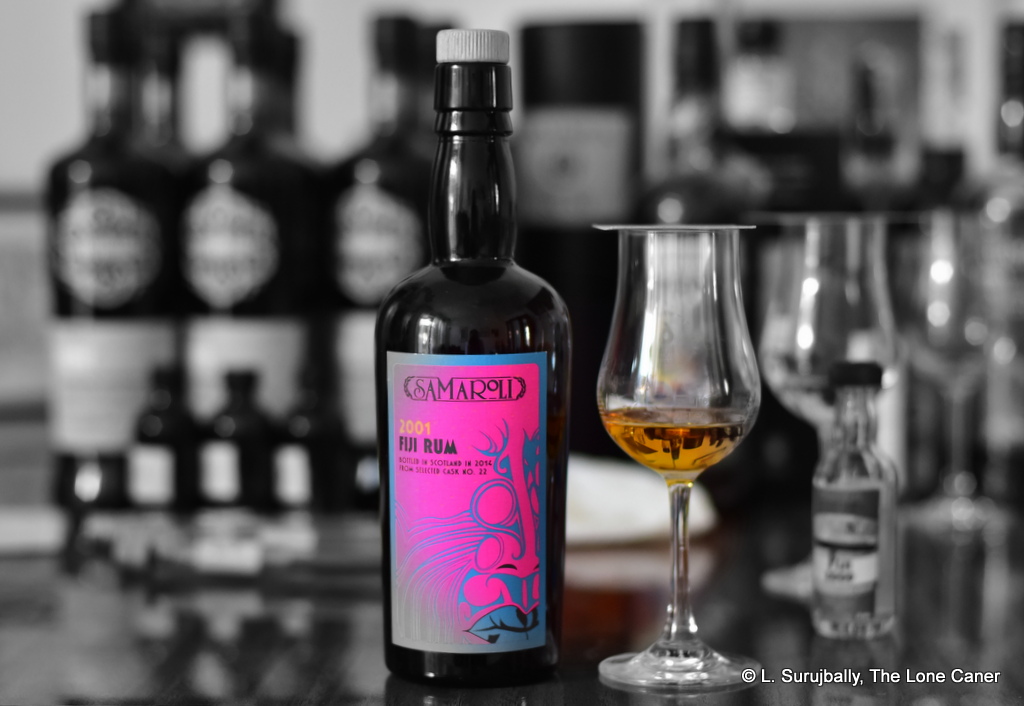 Seeing this screaming violent neon-pink bubble-gum label glaring out from where it squats sullenly in the backbar, one could be forgiven for thinking one had warped back into the 1980s or something, complete with laser shows, tight jeans, big hair and bigger shoulders. It’s not a rum one is likely to overlook on a shelf, which of course may be the point. But no, it’s just a rum distilled in 2001 and released in 2014, and is one of at least seven casks (probably more) which Samaroli picked up from South Pacific Distillers on Fiji, the only distillery on the island.

2001 seems to have been a good year for barrels, or perhaps it was simply that SPD — which since 1998 was part of the Fosters Group from Australia — may have had cash flow problems and threw open their doors to exporting rum, because other indies like Black Adder, Berry Bros. & Rudd and Moon Import all released rums from that year. And over the last decade, the reputation of this heretofore not widely appreciated Pacific island has only grown. For the most part, they produce the Bounty branded rums for local and regional consumption, and sell bulk stocks to brokers in Europe for the independents. 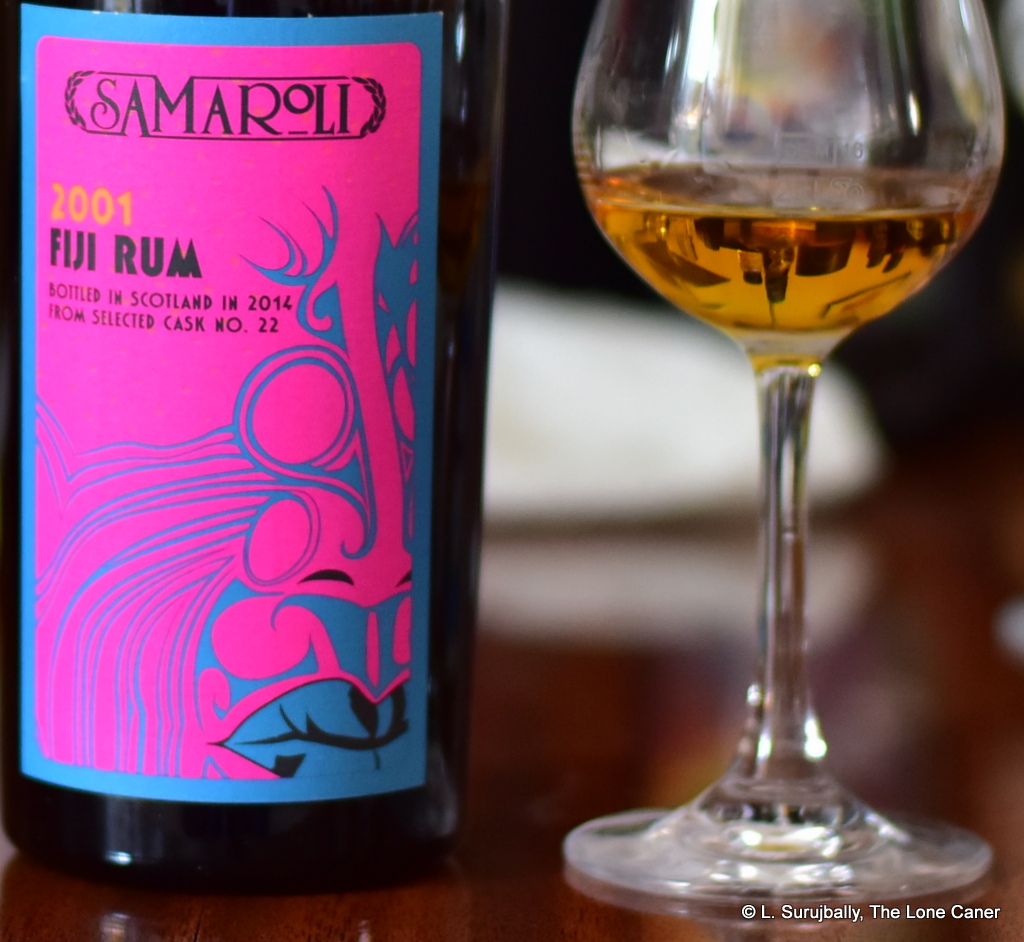 One of these was the eponymous Italian indie formed in 1968 by Sylvano Samaroli (now in the Great Distillery in the Sky, may his glass never be empty there), which branched out into rums as early as 1991, with spotty releases over the next decade and a half, becoming more regular after around 2005. Samaroli have released rums from Guadeloupe, Barbados, Cuba, Brazil, Grenada, Fiji and Haiti, but I don’t think it’s a stretch to assert that it’s for their Jamaican and Guyanese rums that they are better known (recently they have also begun making blends, none of which I have tried so far). Fiji…not so much.

The stats on this one are quickly recounted: distilled 2001 in Fiji, aged in Scotland, 552 50-cl bottles from Cask #32 released in April 2014, at 45% ABV. SPD has both a pot and a columnar still, but I have no idea which one produced the rum…it’s one of those niggling details that too many bottlers, indie or otherwise, never seem to consider as particularly important for some obscure reason of their own.

Still, it’s always fun to try and figure it out, so let’s move right on to the tasting then. Nose first: it’s an immediate sharp billowing cloud of fresh plastic coverings on new furniture, rubber, varnish, quite rich. One can surmise that either the pot still was operational that day, or they took it off the column at a lower strength than usual. Fresh sawn lumber notes mixes with sushi and wasabi, displaying a certain metallic iodine note. Some fruits, mostly fleshy and acidic – tart mangoes, gooseberries — are there, faint, and remain too much in the background. It’s dry and dusty, and after some time suggests some sweet breakfast spices and vanilla and a touch of caramel.

The taste was something of a let down: dry and semi-sweet, it presented cleanly, crisply… almost agricole like. Yet then it went on display notes of brine, black olives, gherkins in vinegar with pimento, pencil shavings, and only grudgingly allowed the hints of light flowers and fruits to take their place. With a touch of water (at 45% it wasn’t needed, but I was curious) faint touches of honey, mead, glue and almond soy milk coil about in the background, not really successfully – they clashed with what had come before. The finish was nice enough – short and dry, content to be unadventurous and straightforward: almonds, vanilla, citrus, coffee and a last squeeze of lemon. 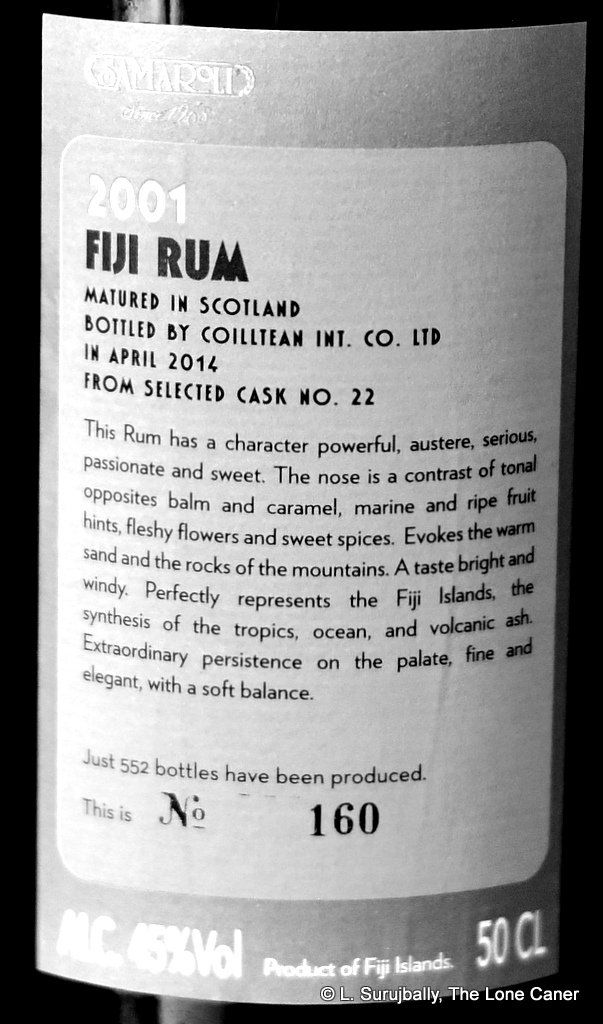 The whole rum has this odd schizophrenic quality of tastes that don’t quite line up. That’s why I give it a middling low score, though I must stress that I did enjoy it enough not to be fiercely critical. It strikes me as something of an essay in the craft, an unfinished experiment that was let out of the lab before being fully grown, or something. But as I say, it must be conceded that it was a respectable piece of work, had points of originality and was recognizably different from Caribbean products with which we are quite a bit more familiar, which is a plus.

I’ve always had a soft spot for Italian independents, perhaps because they were among the first ones I tried that had a regular output, and even if that output varied, there was no shortage. And while older names like Pellegrini, Veronnelli, Soffiantino, Martinazzi, Antoniazzi, Pedroni, Illva Saronno, and Guiducci are now fading from memory (our great loss, I think), many others continue to thrive: Rum Nation1, Moon Import, Samaroli and Silver Seal, and, of course, Velier. Even within that group, Samaroli holds a special place in people’s estimation, including mine. They are not now of that strength which in old days moved earth and heaven, it is true — but perhaps ‘ere the end some work of noble note may yet be done. You can see them searching for it in releases like this one, and if they have not entirely succeeded, at least they have not stopped trying. This is a completely decent rum which is unusual enough to warrant a second look, and if you’re into rums from the Pacific to begin with, it’ll not disappoint. That said, I would not recommend looking directly at that label if you can help it.