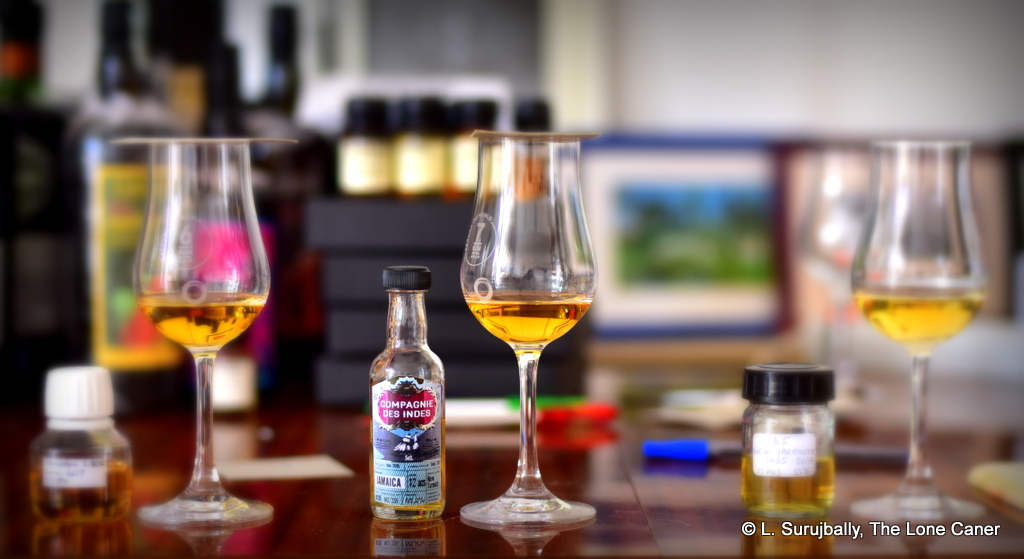 With the rise of the New Jamaican and their distillery offerings, it is instructive to remember that indies still have a pretty good handle on the good stuff too. We keep seeing new aged releases from Monymusk, Clarendon, Long Pond from makers big and small. Velier continues to add new Hampden releases (or whole new collections) every time we turn around and Worthy Park is always around putting out really good pot still juice for those who know the difference.

Lastly there’s New Yarmouth, which is the distillery in Clarendon Parish which is part of Appleton (not to be confused with the Clarendon Distillery) and supplies it with its white overproof stocks. New Yarmouth has both pot and column stills, and is more into the production of stock components for blends (often shipped elsewhere in bulk) than any individual bottlings of its own. That of course has not stopped many smaller companies from trying to bottle just New Yarmouth rums as a unique releases in their own right in the ever more concerted drive to atomize Jamaican rums to the nth degree (I’m still waiting for the first unaged backcountry moonshine to be given the full rollout as a true artisanal rum of the country).

But as far as I’m aware, the first indie to make a real splash with this distillery was actually Florent Beuchet’s outfit, the Compagnie des Indes, when they started bottling some for the 2017 release year. Time passes fast nowadays and new hot-sh*t releases are coming more often, and 2017 was no slouch itself — Toucan appearing on the scene, the first Worthy Parks I can recall, Novo Fogo, Foursquare’s Criterion, Rum Nation’s Madeira agricoles — yet even in this company, the CdI New Yarmouth stood out in the rum fests where it was shown. There were two versions: one at 55% for the more general market, and a huge 65.2% beefcake that for some reason only those raving rum crazies in Denmark were allowed to buy. That’s this one. 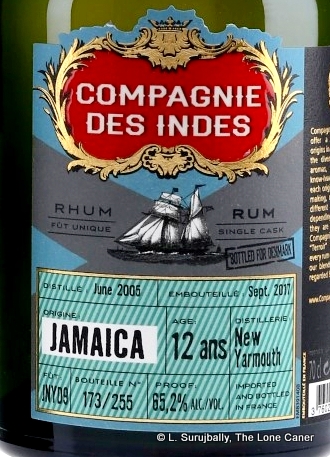 And what a rum it was. I don’t know what ester levels it had, but my first note was “a lot!”. I mean, it was massive. Pencil shavings and glue. Lots of it. Musky, dry, cardboard and damp sawdust. Some rotting fruit (was that dunder they were using?) and also rubber and furniture polish slapped on enough uncured greenheart to rebuild the Parika stelling, twice. The fruitiness – sharp! – of tart apples, green grapes, passion fruit, overripe oranges and freshly peeled tangerines. Florals and crisp light notes, all of it so pungent and bursting that a little breeze through your house and the neighbors would either be calling for a HAZMAT team or the nearest distillery to find out if they had lost their master blender and a still or two.

Okay, so that was the nose, smelly, fruity, funky, alcoholic, rummy and completely unapologetic. It took no prisoners and didn’t care what you thought, and Lord was it ever distinct and original. Was the palate any different?

To some extent, yes. It started out dry, and quite sharp, with a lot of lumber and fresh sawn green wood – the pencils had it! – plus glue and rubber. Acetones, nail polish, paint stripper and turpentine. But also some organics were there, because clearly the kitchen and a table had now been built and now it was time for food. So, gherkins, pickles, cucumbers in vinegar and pimento. Green apples, sour oranges and five-finger, soursop, kind of marginal, but trending towards an edgy sweet. Only at the end did the richness and hidden quality emerge to provide its own version of shock and awe: honey, caramel, nougat, bitter chocolate, and bags of rich fruits like peaches, apricots, dates, raisins, finishing up with a long, dense, sharp, dry close redolent of honey, vanilla, red wine trending to vinegar.

From this overlong description it’s clear there’s a whole lot of shaking going on in my glass. It’s an extraordinarily rich pot still rum which rivals any Worthy Park or Hampden I’d tasted to that point. It somehow never managed to slip off the rails into undrinkability, and was a great sipper even at that strength, completely distinct from Hampden or WP, and perhaps trending a bit more to Long Pond. But a caution – it is complex and has flavours that at first blush don’t seem to work well together (until, much to one’s surprise, they do). For that reason and for the strength, I’d suggest either trying the 55% edition or adding some water to tame this thing a bit, because it’s surely not for beginners — which may be the reason, now that I think about it, that it was only released to the guys up north, and why they were happy to get every last bottle for themselves.

The New Yarmouth, then, was not just a damned fine rum in its own right, but something more, something I would have thought to be impossible in this day and age – a distillery-specific hooch that didn’t depend on its age or its antecedents or the myth of the still or the name of its maker for effect and power. It came together and succeeded because of the enduring strength of the rum itself, and the mastery of those who made it, and lends its lustre to all of them.