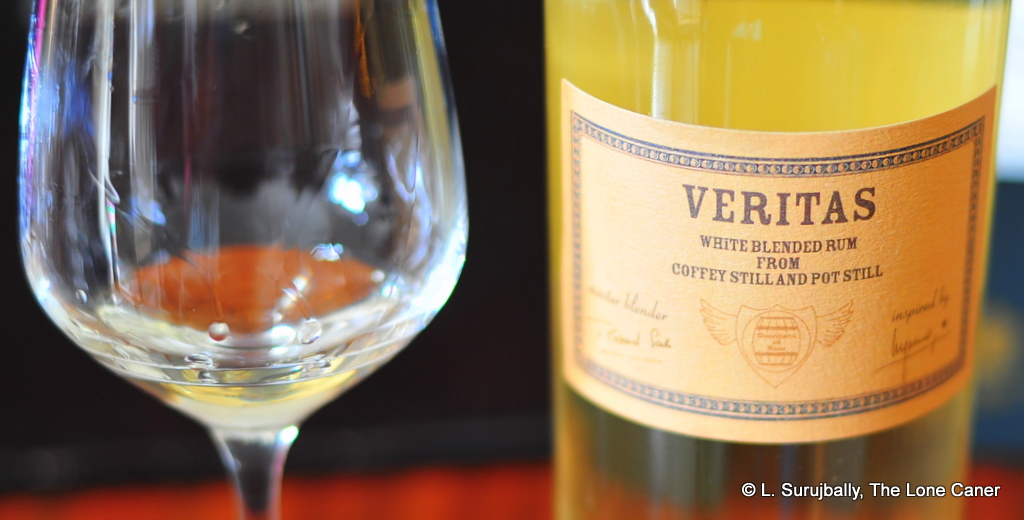 In commenting on the two-country blend of the Veneragua, Dwayne Stewart, a long time correspondent of mine, asked rather tartly whether another such blend by the Compagnie could be named Jamados. It was a funny, if apropos remark, and then my thought went in another direction, and I commented that “I think [such a] blend’s finer aspects will be lost on [most]. They could dissect the Veritas down to the ground, but not this one.”

It’s a measure of the rise of Barbados and the New Jamaicans that nobody reading that will ask what I’m talking about or what “Veritas” is. Three near-hallowed points of the rumcompass intersected to make it: Barbados’s renowned Foursquare distillery, which provided a blend of unaged Coffey still and 2 YO pot still rums for their part; and Hampden out of Jamaica chipped in with some unaged OWH pot still juice to provide some kick. Since those two distilleries were involved, it will come as even less of a surprise that Luca Gargano who is associated privately and commercially with both, probably had a hand with the conceptual thinking behind it, and Velier, his company, is the European importer.

To be honest, I’ve never been entirely won over by multi-country blends which seek to bring out the best of more than one terroire by mixing things up. Ocean’s rum took that to extremes and fell rather flat (I thought), the Compagnie des Indes’s blends are not always to my taste (though they sell gangbusters), the SBS Brazil-Barbados was meh – my feeling is that blends work better when they concentrate on one aspect of their home, not try to have several international citizens cohabitate under one cork. Veritas – it is known as Probitas in the USA for copyright / trademark reasons – may just be an exception that proves the rule (and true Navy rums are another). 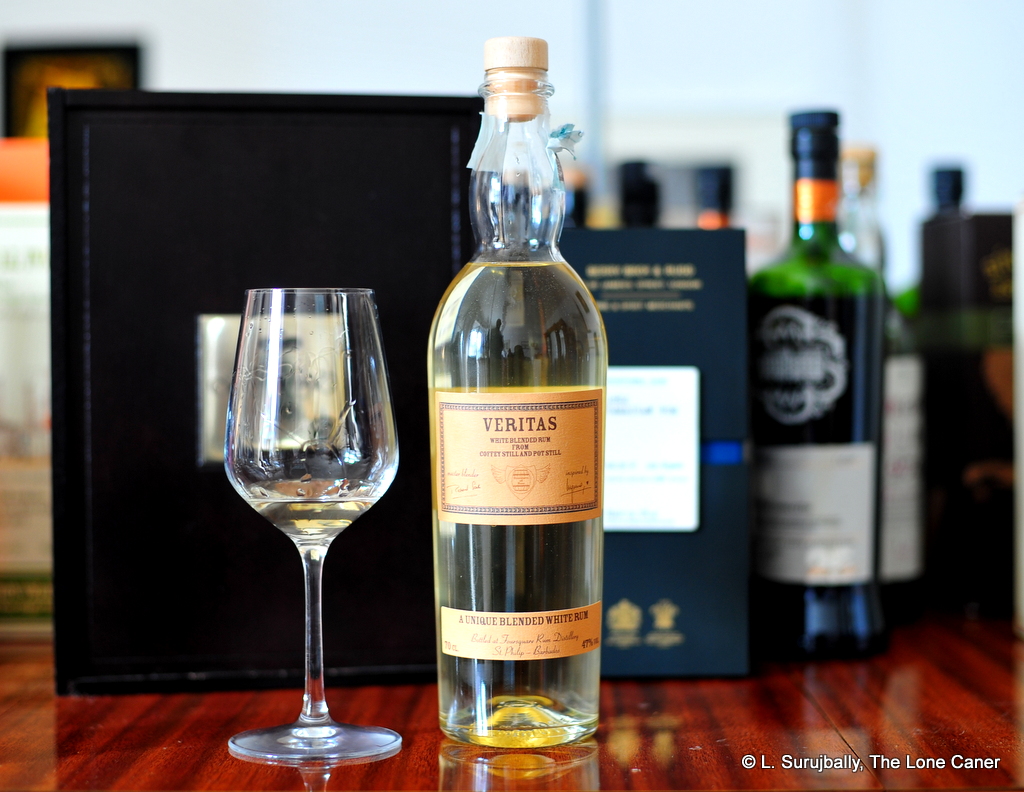 Because, nosing it, it is clear that it is quite an interesting rum, even though it’s not really made for the sipping cognoscenti but for the cocktail crowd. The Hampden aromas of pot still funk dominate the initial nose — with glue, furniture polish, wax, acetone and ummm, oversweet garbage (which is not as bad as it sounds believe me) — it’s just that they don’t hit you over the head, and remain nicely restrained. They give way to crackers, cereals and a fruity mix of pineapples, strawberries, bubble gum, and then, like a violent storm passing by, the whole thing relaxes into vanilla, creme brulee, caramel, lemon meringue pie and some nice pine tarts.

The balance on the tongue underscores this zen of these six different aspects: aged and unaged, pot and column, Barbados and Jamaican, and the flavours come like that gent in Hemingway’s The Sun Also Rises went broke: gradually, then suddenly, all at once. It’s sweet with funk and fruits and bubble gum, has a crisp sort of snap to it, not too much, and moves around the tasting wheel from creamy tartness of yoghurt, salara and sweet pastries, to a delicate citrus line of lemon peel, and then to caramel and vanilla, coconut shavings, bananas. The finish is a bit short and in contrast to the assertive scents and tastes, somewhat weak (ginger, tart fruits, some vanilla), but I think that’s okay: the rum is assembled to be a serious – even premium – cocktail mix, to make a bitchin’ daiquiri. It’s not for the sipper, though for my money, it does pretty okay there too.

In fine, it’s a really good “in the middle” rum, one of the better ones I’ve had. The strength of 47% is near perfect for what it is: stronger might have been too sharp and overpowering, while a weaker proof would have allowed the notes to dissipate too quickly. It’s hard to miss the Jamaican influence, and indeed it is a low-ester rum as dampened down by the Bajan component at the back end, and it works well for that. 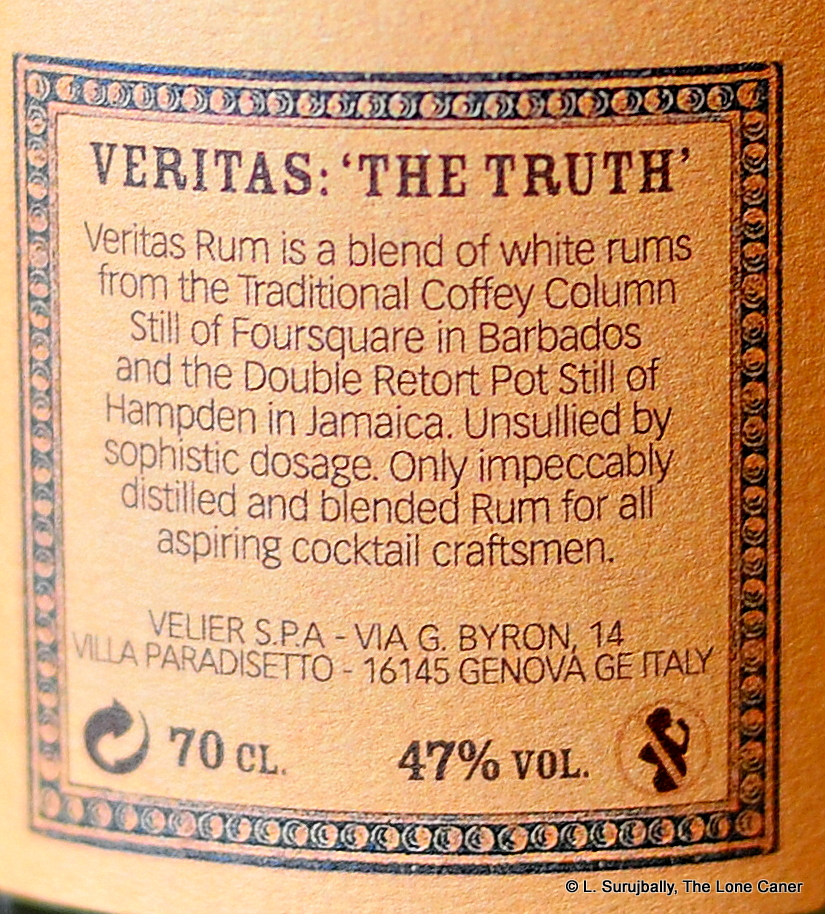 When it really comes down to it, the only thing I didn’t care for is the name. It’s not that I wanted to see “Jamados” or “Bamaica” on a label (one shudders at the mere idea) but I thought “Veritas” was just being a little too hamfisted with respect to taking a jab at Plantation in the ongoing feud with Maison Ferrand (the statement of “unsullied by sophistic dosage” pointed there). As it turned out, my opinion was not entirely justified, as Richard Seale noted in a comment to to me that… “It was intended to reflect the simple nature of the rum – free of (added) colour, sugar or anything else including at that time even addition from wood. The original idea was for it to be 100% unaged. In the end, when I swapped in aged pot for unaged, it was just markedly better and just ‘worked’ for me in the way the 100% unaged did not.” So for sure there was more than I thought at the back of this title.

Still – “Truth” is what the word translates into, just as the US name “Probitas” signifies honesty, and uprightness. And the truth is that the distilleries involved in the making of this bartender’s delight are so famed for these standards that they don’t need to even make a point of it any longer – their own names echo with the stern eloquence of their quality already. The rum exists. It’s good, it speaks for itself, it’s popular. And that’s really all it needs to do. Everything else follows from there.