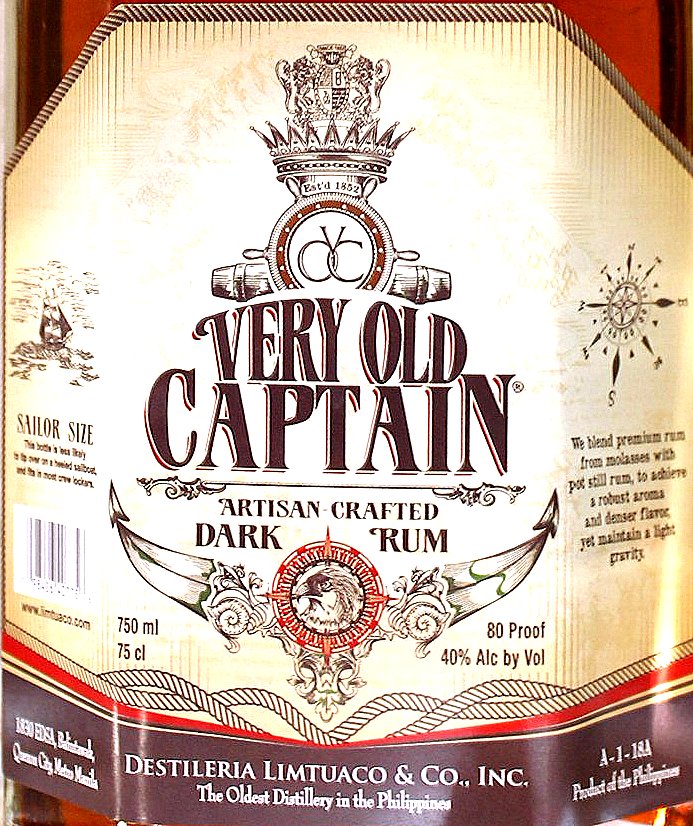 Lest you think I’m just having a bad hair day, consider what the label says above and below that faux-piratical name: “Very Old” and “Artisan Crafted Dark Rum”. Well, it’s not very old, not artisanal, crafted has very little meaning, “artisan crafted” is not what it suggests, dark is not an indicator of anything except colour (certainly not of quality or age or purity), and that leaves only one word that can be construed as true: “rum”. One wonders why it wasn’t just left at that.

Now, this is a Philippine dark rum, blended, which the company website notes as being “the equivalent of 8 years”. Since they issue an actual 8 year old and 12 year old that are clearly stated as being such, what’s the issue with saying what this thing is without the waffling? The Philippine Daily Inquirer had an article dating back to 2015 that said it was actually five years old and no mention of a pot still was made either there or on Limtuaco’s wesbite, although the back label speaks helpfully to the matter (“We blend premium rum from molasses with pot still rum” – as if somehow the two are different things) and BespokeManBlog mentioned it the same year when writing enthusiastically about the rum. Limtuaco was clear in the blurb of the 8YO that it had some pot still action and did not do so for the VOC, so I think we can reasonably posit it’s a blend of pot and column, and the whole business of “batch” and age-equivalency can be dispensed with.

Palate? Sweet, with white guavas and green grapes at first. Warm and somewhat faint, which is expected at that strength, with gradually emerging notes of molasses, vanilla, masala, and peaches in syrup. It’s all very mild and laid back, little oakiness or tannins or bitterness, hardly aggressive at all, which raises additional questions. The finish provided little of consequence, being soft and easy and gone in a flash, leaving behind rapidly fading memories of light acetones and watery fruits. And breakfast spices.

Given that our faith in the company’s background notes has been somewhat eroded, what it means is that we can’t tell if the rum is for real — and the tastes that seemed somewhat artificial and added-to have no basis in our mind’s trust, in spite of the company website’s denials that they indulge the practice. Yet since it is positioned as something special and premium (“high-end”), I expect more disclosure from then, not less, and to tell me that it derives from blackstrap molasses and is 40% ABV is hardly a fount of information, now, is it? The fact that they make some of their spirits from neutral alcohol that’s then processed just ensures reviews like this one.